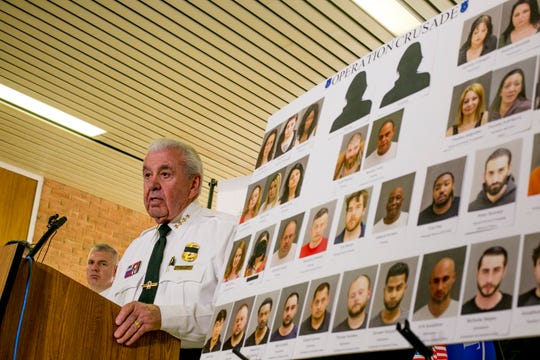 Warren — Warren officials announced Friday a special police task force that has rounded up 35 women and men as the start of a multi-phase effort to crack down on human trafficking and other illegal activities.

Police made undercover arrests of 17 women and 18 men at seven Warren motels this past week where sex-for-pay services were offered online, Warren Police Commissioner William Dwyer said. Most have been arraigned and face felony charges.

The unidentified motels cooperated fully with Operation Crusade and do not face any charges, Dwyer said.

"We hope this will send a clear message Warren is not going to tolerate human trafficking or prostitution," he said.

“This is not just about prostitution,” Dwyer said. “We believe the people involved in this are putting victims into these roles, sometimes getting them addicted to drugs.”

Dwyer said his investigators plan to dig deeper into the offenders and identify additional victims.

Thirty-five officers, both men and women, were assigned to the undercover operation conducted May 14-16. Thirty felony warrants were issued and 45 misdemeanor offenses cited against people ranging from 28 to 51 years of age. Those arrested reside throughout Metro Detroit, Dwyer said.

Offenses range from transportation of prostitutes and accepting earnings of a prostitute — both felonies punishble by up to 20 years in prison — to use of a computer to commit a crime, a misdemeanor. Bonds ranged from $20,000 to $150,000.

Two victims — believed to have been transported to the area for the purpose of prostitution — will not be charged.

Just one month ago, a Georgia man wanted for homicide and drug charges in that state was arrested in a Warren motel, one of several he had been living in since December.

Dwyer said the man, also in possession of drugs, brought a 27-year-old woman with him and advertised sex services online. He has been extradited to Georgia but may eventually face charges here for accepting the earnings of a prostitute and prostitution pandering, both felonies that carry penalties of up to 20 years in prison.