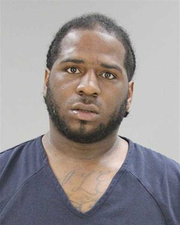 On Tuesday, the suspect, Mack Cox, was given a $75,000 bond at his arraignment at 39th District Court in Roseville. He has been charged with four felony counts: Failure to stop at the scene of a crash resulting in serious impairment or death; fleeing or eluding a police officer; assaulting or resisting or obstructing a police officer, and stealing or retaining without consent a financial transaction device.

Glandon said an officer stopped a white 2006 Chevy Impala on Common near Gratiot for an equipment violation around 3:40 a.m.

As he walked to the vehicle to speak with the driver, the driver sped off, authorities said.

The officer notified other officers about the fleeing car and reported the vehicle was traveling south on Gratiot. The officer was instructed to terminate any attempt to stop the vehicle.

A short time later, another officer reported a crash at Gratiot and 12 Mile. He said the driver of a white Chevy Impala involved in the crash fled on foot and was heading east.

The victim drove a silver 2000 Mercury Sable. Police located a suspect and arrested him, officials said.

Cox is due in court on June 19 for a probable cause conference.