The release came hours after a judge ruled that Smith had an obligation to turn over the requested documents by Wednesday. 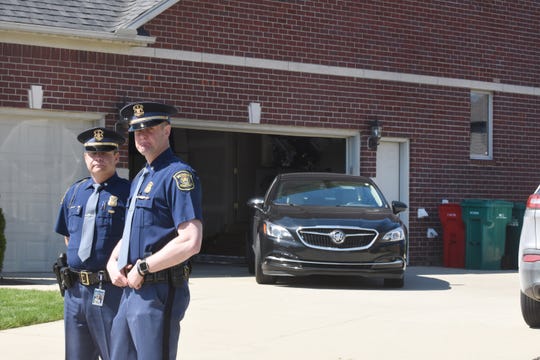 Mount Clemens — Macomb County Prosecutor Eric Smith on Monday released copies of search warrants and related information regarding police raids at his home and office sought by The Detroit News and other news media.

The documents, sought under the Michigan Freedom of Information Act, contain information about Michigan State Police raids at Smith’s county offices in April and last month at his Macomb Township home.

The material relates to spending from forfeiture funds maintained by Smith’s office, which is being questioned by some county officials and investigated by state police at the request of the Michigan Attorney General's Office.

The release came just hours after Judge Edward Servitto of Macomb County Circuit Court ruled that Smith had an obligation to turn over the requested documents by Wednesday or face a show cause hearing and potentially, a contempt of court charge.

Macomb County Corporation Counsel John Schapka said the documents released would satisfy Servitto and the hearing will not be needed later this week.

“Out of respect for the Michigan State Police and their request not to interfere with their responsibilities, we believe that the search warrant and tabulation were initially exempt from disclosure under the FOIA,” Smith said in a statement.

Property sought — and believed to have been seized at Smith’s home — included part of an elaborate home security system possibly purchased with thousands of dollars in public funds.

Plainclothes state police investigators, lugging aluminum ladders, spent several hours going through Smith’s residence while he was at home. They left with armloads of electronic equipment, including surveillance cameras .

Servitto's ruling came in response to a lawsuit filed by the Graham Media Group on behalf of WDIV-TV (Ch. 4). Servitto agreed with the station’s attorney that Smith was required to turn over the requested list.

The State Police searched Smith’s county office as part of the probe initiated by the State Attorney General’s Office into Smith’s forfeiture asset funds. Smith has set up separate accounts from $1.8 million in funds taken from drug dealers and drunken drivers. At issue is whether the funds were appropriately used for law enforcement related purposes as required by law.

The Macomb County Board of Commissioners has authorized a special forensic audit of the funds, which is underway.

“No word on the audit or the MSP investigation,” Schapka said Monday. “They are both continuing, but the investigators are understandably not disclosing what they are doing or where the investigation has taken them.”

Expenditures from the forfeiture accounts have been questioned by Macomb County Executive Mark Hackel, County Treasurer Lawrence Rocca and other officials who moved for a forensic audit of the accounts.

A review by The News of hundreds of checks that have passed out of the account reveal sizable checks were made out by Smith to various Macomb County police agencies as their respective share of forfeitures in criminal arrests which took place in their community. But Hackel said some checks involve payments to charities and churches that are "definitely" not permitted.

Other expenditures under focus include monthly payments to a security firm ($10,000 to $20,000), DirecTV, $20,000 in furniture, a $927 refrigerator for a break room and more than $35,000 for Verizon services and wireless bills. The county independently provides many of the same services or purchases them from a different company, according to Schapka, who said there are some questions that need to be resolved.

"All expenditures of county money require approval by the Board (of Commissioners)," said Schapka. "The Board does so through its annual appropriation Ordinance, which establishes the county's budget. The ordinance is broken down on a department-by-department basis, and within each departmental budget further appropriated to specific purposes (i.e., employee payroll, books, paper supplies, office equipment lease and maintenance, etc).

Schapka noted even where money is properly provided for in an appropriations ordinance, the county's Contracting and Purchasing Ordinance requires competitive bidding and contracts for the acquisition of goods and services. All contracts must be signed by the county executive, and any contract with a cost of $35,000 or more must be approved by the Board of Commissioners.

In an earlier interview, Macomb County assistant prosecutor Joshua Van Laan told The News his office had openly discussed the forfeiture fund and its appropriate expenditures "for years" and at one point some county officials wrongly encouraged the prosecutor's office to spend the funds on staff salaries.

"That was never done because it would have been improper," Van Laan told The News. "We have never been against an audit — we welcome it. In the end, we believe it will show everything has been done properly.”