Man charged after throwing drugs out of car during Clinton Twp. police chase

Man charged after throwing drugs out of car during Clinton Twp. police chase

Watch dash and body cam footage of a Macomb Sheriff's deputy chasing down a suspect in a high-speed motor chase, followed by a foot chase. The Detroit News

Clinton Township — A Ray Township man is facing several charges after allegedly throwing packages of drugs out of a car while fleeing from police Sunday.

Aniano Arreola-Mora, 28, was charged in court Monday with third-degree fleeing police, possession of less than 25 grams of a controlled substance, having an open container of alcohol in a vehicle and driving with a suspended license, according to Clinton Township Police.

If convicted, he faces up to five years in prison for the fleeing police charge and four years for the controlled substance charge. The other two charges are misdemeanors.

A magistrate ordered Arreola-Mora held on a $5,000 bond, officials said.

On Tuesday, the Macomb County Prosecutor's Office authorized three additional charges against Arreola-Mora. They are fleeing a police officer, third degree, assaulting/resisting/obstructing a police officer — both felonies - and malicious destruction of trees, shrubs, crops, grass, turf soil between $200 and $1,000 — a misdemeanor. 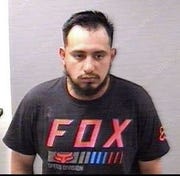 Police said an officer was monitoring traffic for speeders at about 2:50 p.m. Sunday when a 2003 tan Cadillac passed him on 19 Mile near Garfield. The officer activated his lights and siren and attempted to execute a traffic stop on the Cadillac.

As the two vehicles traveled northbound on Dalcoma Drive, the officer saw the driver throw four packages out of the driver's side door. Another officer recovered the packages and the substance inside tested positive for cocaine, authorities said.

The suspect drove to Hall Road, then west to Garfield and south to Canal Road.

He then drove into the city of Sterling Heights on 19 Mile and took Van Dyke Road north to 26 Mile. The suspect continued on 26 Mile to Romeo Plank and north to 27 Mile to Teller Road until he reached 28 Mile. He took 28 Mile to Ray Center Road where he began heading south.

Police said while he was on Ray Center Road, the suspect drove onto a home's lawn and got stuck on the muddy grass.

He got out of the car and was taken into custody by Clinton Township police officers and Macomb County Sheriff's deputies.

He is lodged at the Macomb County Jail.