The day after he took the stage with nine other Democrats in Detroit for the first of two CNN debates, the former Texas congressman met with several teachers and union laborers at a restaurant here at the lunchtime hour. 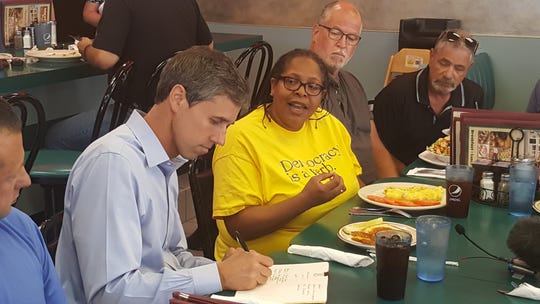 O'Rourke said he would beat Republicans by calling to change states like Michigan from right-to-work to "right to organize."

"If unions are strengthened, we will grow the middle class even more than we already have," he said.

Trump won Macomb County in 2016 by 12 percentage points over Democrat Hillary Clinton. O'Rourke, who visited Macomb County in March as part of a three-city Metro Detroit tour, took notes and wrote down the names of each person seated at the event.

He discussed policy on a litany of issues and promised to tax the wealthy to ensure they pay "their fair share" as a way to finance his plans.

"All of this is connected, in my mind, public education connected with unions connected with our economy connected with an investment in infrastructure and clean energy jobs going forward," O'Rourke said at John's Family Grill. "I think we have to be fearless about this future just as we were in the past, and jobs and economic growth will follow."

The 46-year-old O'Rourke promoted his plan for universal health care to insure "everyone who does not have health care today is automatically enrolled" to a plan to create a $500 billion "permanent education fund" for helping impoverished students of color.

"How are you going to pay for it?" asked Stacey LaPlante, 48, of Macomb Township, a high school teacher who added that Republican voters would ask the question.

"If we tax capital investment at the same rate that we tax wage income or ordinary income, (it creates) hundreds of billions of dollars," he said. "And then we can make the investment not only in higher education but we could also extend learning to pre-K. In other words, the investment pays for itself."

O'Rourke rose to national prominence last year when he came within 3 percentage points of defeating U.S. Sen. Ted Cruz, R-Texas. After the event, he told reporters it's important to "not write anyone or any state off" and that Michigan is important.

O'Rourke said he plans to appeal to Trump supporters by reflecting their stories in the campaign. "And that happens by returning the skills trade jobs and capital is available to start small businesses, he said.

On gun violence, Beto reiterated his claim in last night's debate that America will lose close to 40,000 people to gun violence. "We know that we're not inherently evil or violent or bad," he said. "We know there's a human solution to this human-caused problem" with universal background checks and ban on certain types of "weapons of war."

Undecided voter Nick Marinello, 37, of St. Clair Shores said he was impressed with O'Rourke's "optimism that is lacking in America."

Marinello said he hopes O'Rourke can prove he "has the staying power" to last in the race, "At that point, he's worthy of my vote, the high school teacher said.

Winning over Macomb County Trump voters will require showing authenticity and being hopeful, he said.