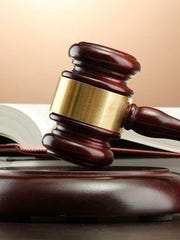 In January 2018, the Michigan State Police Internet Crimes Against Children Task Force learned 65 explicit images had been uploaded to an Internet-based file-sharing account associated with an IP address identified as belonging to Keith Alan Arms Jr., investigators said in a statement.

State police executed a search warrant on his home and seized three electronic devices. A forensic examination revealed numerous images and videos had allegedly been saved on Arms' phone, according to the release.

Arms, who has prior misdemeanor convictions for fourth-degree criminal sexual conduct, was arrested. He was arraigned Thursday before 38th District Court Judge Carl Gerds.

• One felony count of using a computer to commit a crime, which carries a maximum sentence of seven years in prison

• Five felony counts of distributing child sexually abusive material, which carries a maximum sentence of seven years in prison and a $50,000 fine for each count

• Five felony counts of possessing child sexually abusive material, which carries a maximum sentence of four years in prison and a $10,000 fine for each count

Bond was set at $1 million. A probable-cause conference is scheduled for 1 p.m. Sept. 10.

“Our office will prosecute those who prey on Michigan’s children to the fullest extent of the law,” Michigan Attorney General Dana Nessel said Thursday. “I am incredibly grateful to the members of the Michigan State Police’s Internet Crimes Against Children Task Force and our attorneys for their continued commitment to protecting Michigan children and bringing those who exploit them to justice.”