Roseville — Police are asking the public for help to identify a man who robbed an appliance store last Thursday.

According to preliminary investigation, the suspect entered the ABC Warehouse on 13 Mile near Little Mack Road at about 9 p.m. on Jan. 16. He was greeted by an employee and asked to use the restroom.

Roseville police are asking the public for help to find a man who robbed an ABC Warehouse store on 13 Mile near Little Mack last week Thursday. (Photo: Roseville Police Department)

The employee told the man the store was about to close and the suspect pulled out a handgun, according to authorities. The suspect then approached a counter where another employee was counting the day's cash proceeds. The suspect reached over the counter and grabbed the money, police said.

He fled the store on foot and headed southeast, they said. 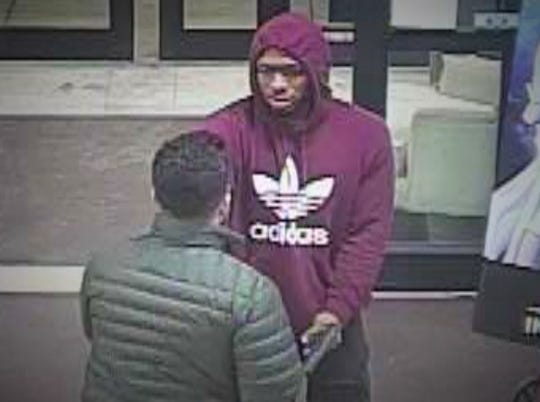 Police said the suspect came into the store minutes before it was closing for the night. (Photo: Roseville Police Department)

The suspect is described as having a thin build and may have had skin discoloration around his lips.

Anyone with information about the suspect should call Det. Sgt. Stephan Dzierzawski at (586) 447-4492.