Hackel: Businesses need to know when they can reopen

“All we hear from the governor’s office is they need more information, more data and more testing before the state is completely opened up,” he said

Hackel: Businesses need to know when they can reopen

Whitmer extended her Stay At Home directives last week but has slowly been permitting some businesses — first construction and landscaping and more recently, manufacturing — to start up under guidelines after nine weeks of inactivity. 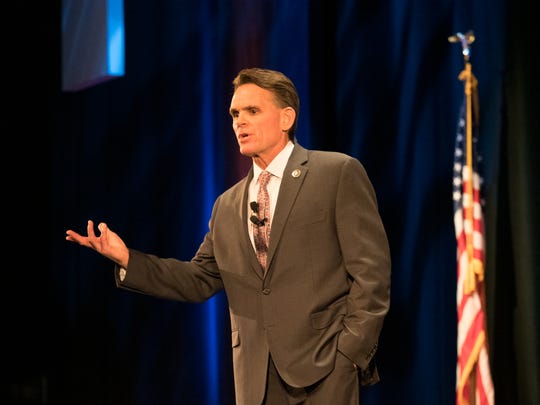 Macomb County Executive Mark Hackel delivers the State of the County address at the Macomb Center for the Performing Arts in Clinton Township on Wednesday evening, December 4, 2019. (Photo: Brooke Brzoska-Ogorek, Special to The Detroit News)

“I’m getting asked every day by businesses ‘What do we do?’ or ‘When can we open?’” said Hackel. “If they haven’t been cleared to open already, I don’t know what to tell them. Especially when. Of if ever. The executive orders are pretty vague and undefined.

“All we hear from the governor’s office is they need more information, more data and more testing before the state is completely opened up,” Hackel said. “But no one can say if they are looking for specific numbers. Or percentages. It’s frustrating.”

Hackel's comments come a day before another public demonstration is scheduled in Lansing to protest lockdown rules.

Hackel, one of the state’s most well-known Democrats, stressed his comments should not be misconstrued as criticism of Whitmer’s efforts to protect public health. But he also said he believes businesses should be permitted to reopen, providing they are willing to follow guidelines, which have included testing of workers and temperature checks; social distancing of six feet or more wherever possible and wearing protective masks and gloves.

“Or they can also decide not to reopen,” Hackel said. “If they feel uncomfortable that they are putting the public or their employees at unnecessary risk, they can choose to remain closed.”

Hackel said in the beginning of efforts to confine infections, it was clear some action had to be taken to close down businesses and limit social interaction so hospitals wouldn’t become overrun with patients.

“There’s no question we are trending in the right direction and that’s good,” he said. “I think if you give people the right information, they will continue to make the right decisions.”

If there is a second wave or resurgence of cases, the state can always “pull back on opening things up,” he said.

Whitmer held another press briefing Wednesday afternoon acknowledging the sacrifices being made by residents and businesses but cautioning there is still more to be done. Hundreds of cases continue to be reported daily in Michigan, where more than 48,391 people have contracted the virus since March, with 4,714 of them dying, according to state health department figures.

“This is a time for unity,” Whitmer said.

The governor said the state intentionally left out specific numeric benchmarks to signal a transition from one phase to the next in her six-phase plan to reopen parts of Michigan and the economy.

She said the state needed flexibility to consider a variety of factors when considering re-engaging parts of the economy, such as testing, confirmed cases, availability of personal protection equipment and human activity.

"There's no textbook-specific number that will tell you it is safe to reopen a certain sector of the economy," Whitmer said during a livestreamed news conference.

"There's no special formula that will tell us how and when to reopen," Khaldun said. For example, a certain region may have an uptick in cases, but officials would have to drill down into what was causing the uptick to better understand the cause and consequences of the data, she said.

"Is that associated with a specific facility, a nursing facility or a workplace? Or is it just widespread?" Khaldun said.