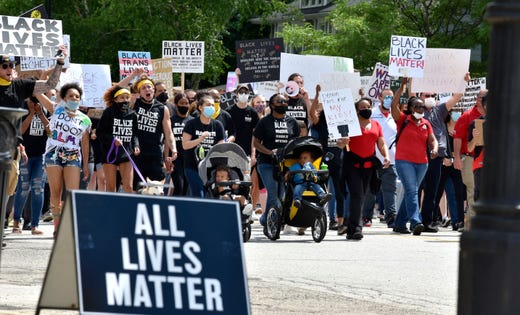 Protesters march northbound on South Main Street in Romeo with a police escort. More than 500 supporters participate in the Romeo March for Racial Justice to end police brutality on Main Street in downtown Romeo, Friday afternoon, June 12, 2020, before arriving at Romeo Park for a vigil with speakers from the community. The event is also in response to an incident earlier this week in which The Romeo Rock was defaced with racist remarks. Todd McInturf, The Detroit News
Fullscreen 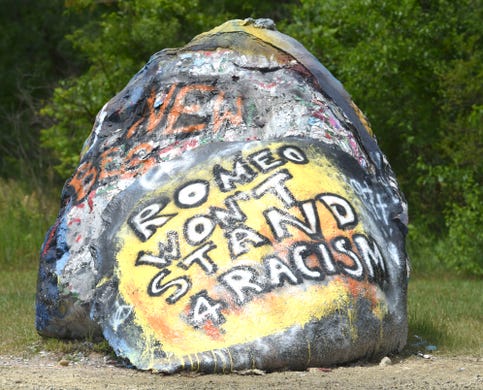 Bikers take pictures of protesters as they walk on Main Street in downtown Romeo. Todd McInturf, The Detroit News
Fullscreen 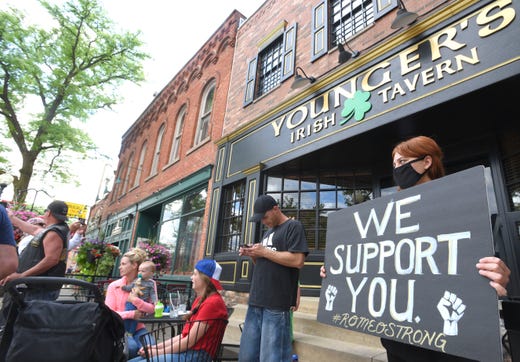 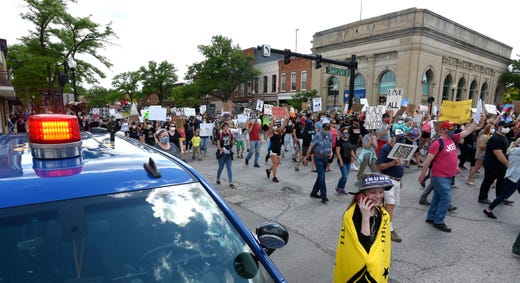 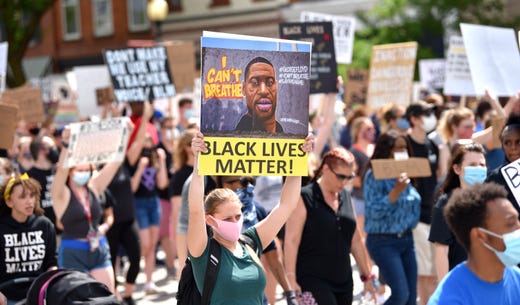 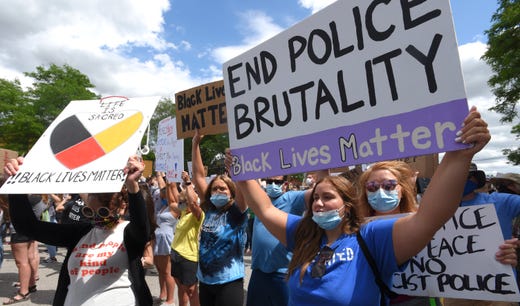 Protesters carry their sign as they march down Main Street in Romeo. Todd McInturf, The Detroit News
Fullscreen 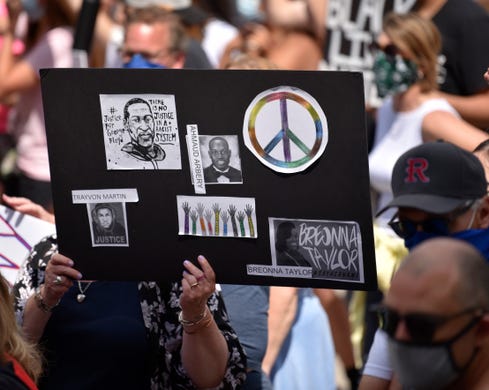 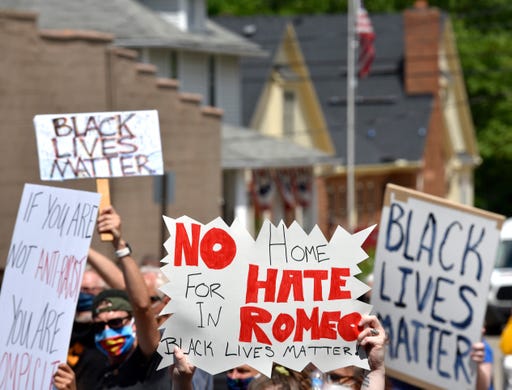 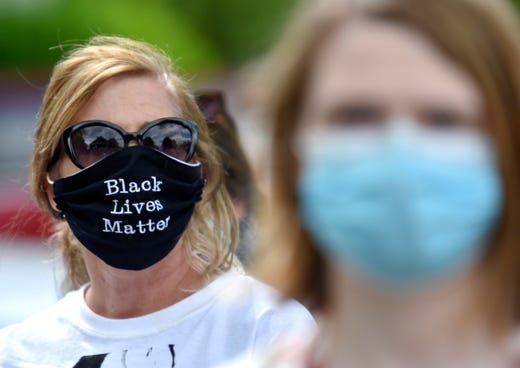 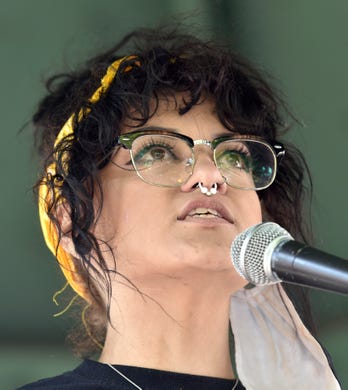 Event organizer Amanda Taylor, of Warren who grew up in Romeo, talks about how she was racially harassed in school. Todd McInturf, The Detroit News
Fullscreen

Megan Muxlow, right, starts to cry as her daughter, Makayla Muxlow, 10, both of Washington Twp., cries while talking about being racially harassed at school. Todd McInturf, The Detroit News
Fullscreen

Megan Muxlow, left, stands by her daughter, Makayla Muxlow, center, both of Washington Twp., as she cries after talking about being racially harassed at school as event organizer Amanda Taylor, right, of Warren, consoles the 10-year-old. Todd McInturf, The Detroit News
Fullscreen 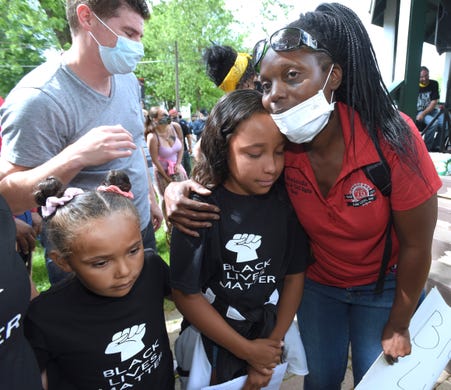 Shalanda Woods, right, of Romeo, consoles Makayla Muxlow, center, of Washington Twp., after the 10-year-old addressed the crowd about being racially harassed at school. Woods is the civil and human rights chairperson for UAW Local 400 at the Romeo Engine plant. Todd McInturf, The Detroit News
Fullscreen 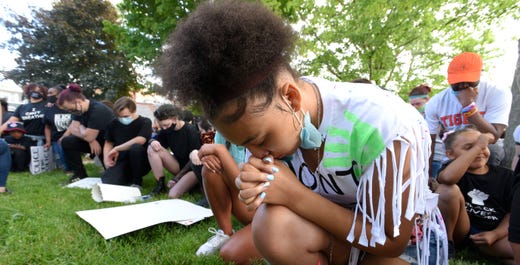 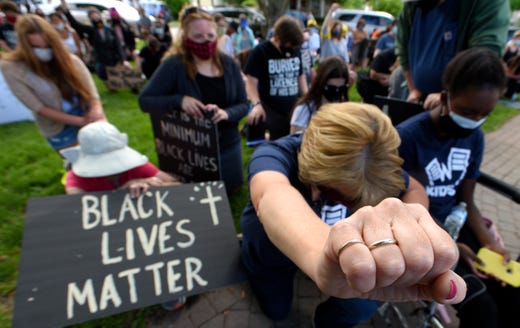 Tracy Weick, of Romeo, holds up her fist as she and other protesters kneel for 8 minutes and 45 seconds, the amount of time a Minneapolis police officer knelt on George Floyd's neck and back before he became unresponsive and later died. Todd McInturf, The Detroit News
Fullscreen

Jacqueline Debeau, of Macomb Twp., holds up a sign while she and other protesters kneel for 8 minutes and 45 seconds. Todd McInturf, The Detroit News
Fullscreen 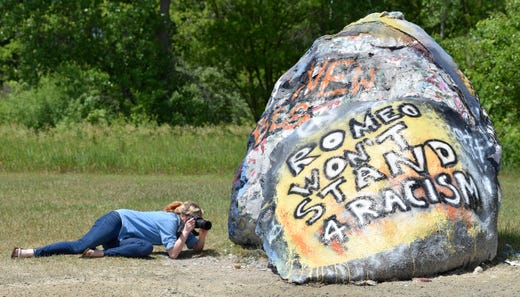 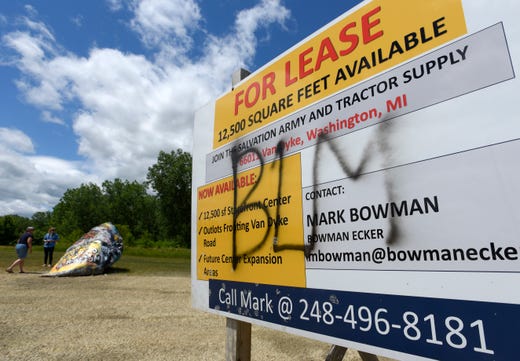 BLM "Black Lives Matter" graffiti is written on a for-lease sign in front of The Romeo Rock. Todd McInturf, The Detroit News
Fullscreen

Romeo — Responding to the painting of racial slurs on a landmark boulder, several hundred  people marched through Romeo on Friday in support of the Black Lives Matter movement.

As the energetic crowd moved through the streets, many pedestrians joined the protest. Others stood in support from the sidewalk or nearby restaurants, holding signs, taking videos, or showing solidarity with a closed fist. 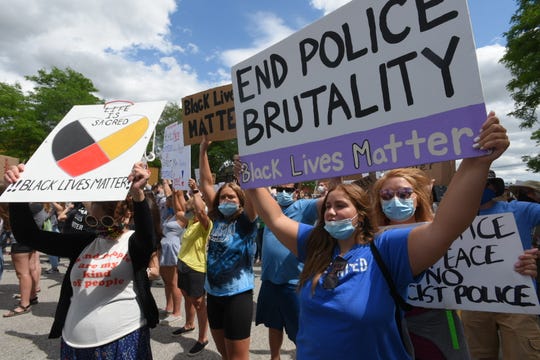 Supporters march for racial justice and an end to police brutality on Main Street in downtown Romeo, Friday afternoon, June 12, 2020, before arriving at Romeo Park for a vigil with speakers from the community. The event is also in response to an incident earlier this week in which The Romeo Rock was defaced with racist remarks.  (Photo: Todd McInturf, The Detroit News)

One supporter, holding a sign that said “Love thy neighbor,” waited on the sidewalk for protesters to pass. As they did, he greeted them with elbow bumps and hugs.

Amanda Taylor, a former Romeo resident who helped organize the march, said the town came together after the rock, which residents usually paint with uplifting messages, was defaced with racial slurs less than one day after residents painted it with "Black Lives Matter."

Protests have spread across the country since George Floyd died May 25 after a Minneapolis police officer pinned the black man with his knee on his neck.

Friday, this town of fewer than 4,000 residents in northern Macomb County joined them.

“I'm happy to see such a diverse crowd in this community which I grew up in supporting not only Black Lives Matter, but a change that needs to happen," said village resident Tanisha Webb, 47. "A change in policy and in representation.”

The march stopped at Romeo Village Park, where attendees heard from several residents about racism they've faced in the city.

Chris Brooks, a pastor at Woodside Bible Church, opened a series of speeches with a prayer.

“Ultimately, the justice we’re seeking comes from transforming hearts,” he said. “Justice is a long fight and a long road. Don’t get weary. Together, there is power in our unity.”

Kyle Webb, a 2016 graduate of Romeo High School, said he guarded the Romeo rock for three days after the Black Lives Matter message was painted over.

Taylor, who spoke after Webb, said the majority of people in Romeo won’t experience what racism is like even though others in the community have.

Despite that, “The dismissive mindset in this town is the minority. The majority is calling for change,” she said. 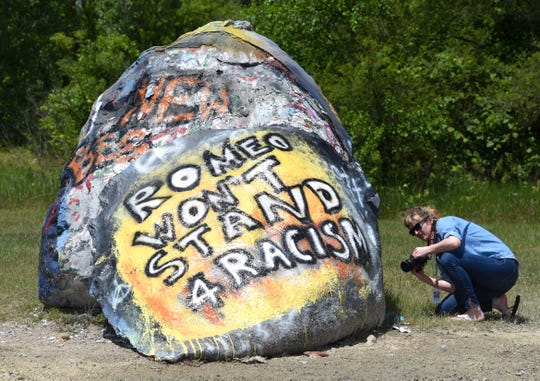 Freelance photographer Heather Sejnowski, of Ferndale, takes pictures of The Romeo Rock prior to the Romeo March Racial Justice. Supporters march for racial justice and an end to police brutality on Main Street in downtown Romeo, Friday afternoon, June 12, 2020, before arriving at Romeo Park for a vigil with speakers from the community. The event is also in response to an incident earlier this week in which The Romeo Rock was defaced with racist remarks. (Photo: Todd McInturf, The Detroit News)

Taylor introduced Makayla Muxlow, a 10-year-old with a white mother and a black father. Muxlow’s speech drew lots of emotion and support from the crowd.

Muxlow recounted a story from her early childhood. At 3 years old, she was playing with two white children before their mother pulled them aside and explained they don’t play with “those children.”

“We are part of this community and we shouldn’t feel different,” Muxlow said. “It’s not right that we are scared to be black, to be ourselves.”

Muxlow invited attendees to a children’s protest she is organizing at 4 p.m. Saturday at the same park.

Andre Fullwood moved to Romeo as a child and graduated from its high school in 2008. Fullwood implored the white folks in the crowd to have more conversations about racism with their loved ones.

Organizers asked the crowd to come out for another demonstration at the Shelby Township hall at 5:30 p.m. Wednesday and removal of township police Chief Robert Shelide, who was put on leave June 4 after making inflammatory remarks on social media about protesters.

Organizers also announced they will fund a George Floyd scholarship to be awarded to a Romeo High student student who fights for justice and against racism.

The demonstration ended with 8 minutes and 46 seconds of silence to represent how long Officer Derek Chauvin knelt on Floyd’s neck. Chauvin and three other officers who were at the scene have been charged in connection with Floyd’s death.