Shelby Township — Demonstrators gathered near the Shelby Township office on Monday to protest the police chief's return to work after his suspension for inflammatory comments online about Black Lives Matter protests. 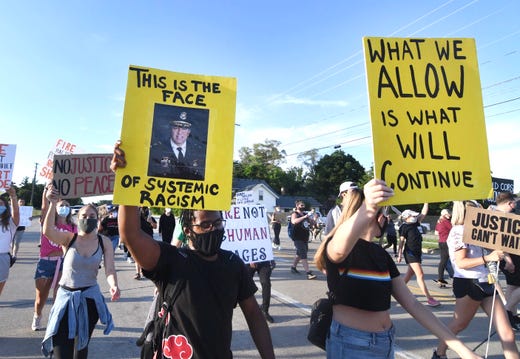 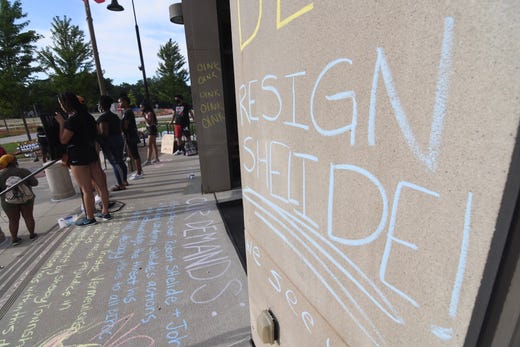 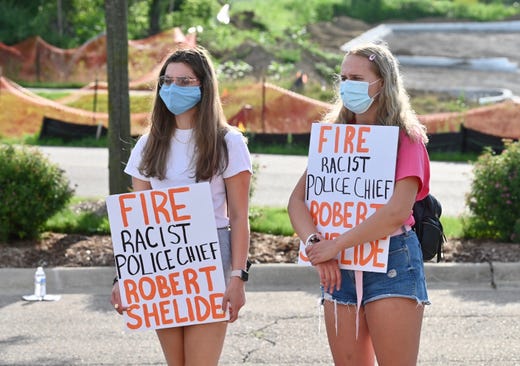 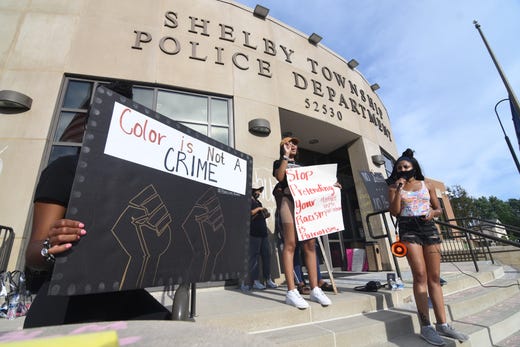 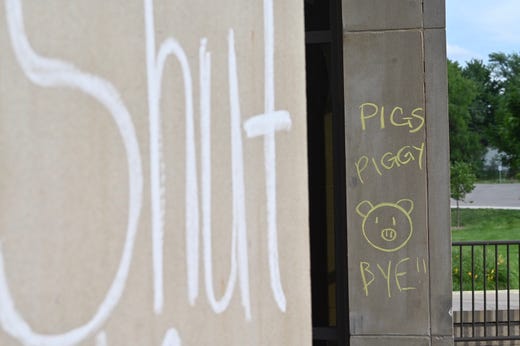 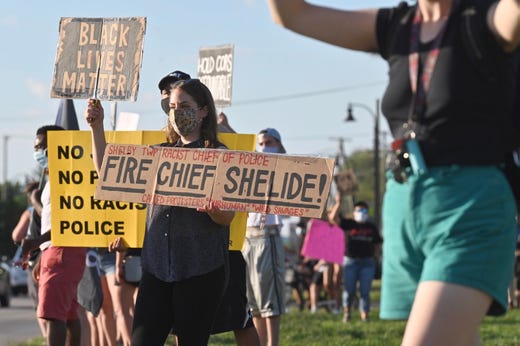 About 60 of demonstrators gathered on Van Dyke beginning at 3 p.m., some wearing masks, and held signs as vehicles honked in apparent solidarity.  They chanted "black lives matter" and “no justice, no peace" as Beyonce's "Freedom" played in the background.

Later, they marched on Van Dyke in the middle of the road with police vehicles at intersections. A representative for Black Activist Mobility Network read a list of demands to the crowd, including the firing of Shelide. They also called for Trustee John Vermeulen to step down after he allegedly shared a Facebook post mocking the removal of Aunt Jemima, a Quaker Oat brand, from products less than two days after he and four other trustees suspended Shelide.

Others used chalk to write in chalk on the township police department building and on adjoining pavement, including their list of demands.

Redford Township resident, Sasha Johnson held an orange bullhorn and led the crowd in chants early in the rally.

“He is in a leadership position, said Johnson, 22.  “If people see those tweets, they are going to think this is OK to do.”

Other protesters also called for police Chief Robert Shelide to be terminated or to resign.

“Remove him from office” said Justin Mann, of Shelby Township and an organizer of the Detroit Solidarity Movement. “We have to set an example for the rest of the police officers across the world.”

Shelide was expected to report to work Monday following a suspension for inflammatory remarks posted under an alias on social media. A police officer at the scene of the protest said he saw Shelide in the office on Monday. 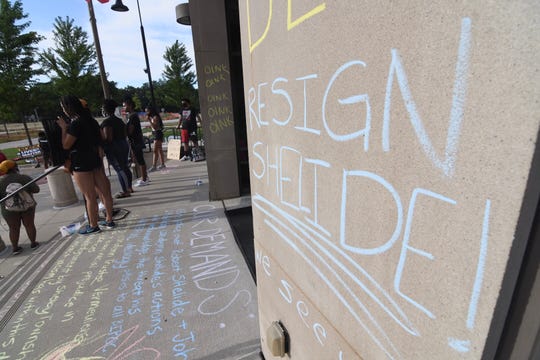 Posts attributed to the chief include comments that anti-police brutality protesters should be placed in “body bags” and “real cops” should be allowed to “take care of the barbarians.” The Shelby Township Board of Trustees placed him on a paid administrative leave in June. He was ordered to attend cultural awareness and de-escalation training.

“We are going to continue to march until he is gone”  said the Rev. WJ. Rideout III, founder of Metro Detroit-based Defenders of Truth and Justice. “We want him to be fired or resign.”

Shelide did not immediately return a request for comment.

Township Supervisor Rick Stathakis and Brad Bates, another township official, also did not respond to requests for comment Monday on Shelide's return or the protest.

Shelide, the township police chief since 2015, has apologized, and in a statement  in June said "... I humbly and respectfully ask for the courtesy of forgiveness to those I have offended, to my department and more importantly to those I am sworn to serve.”

The gathering Monday followed other demonstrations aimed at the chief in Shelby Township.  Protesters gathered in front of the township offices on June 24 and June 16.