Gov. Rick Snyder has asked the president to declare a major disaster for Metro Detroit. 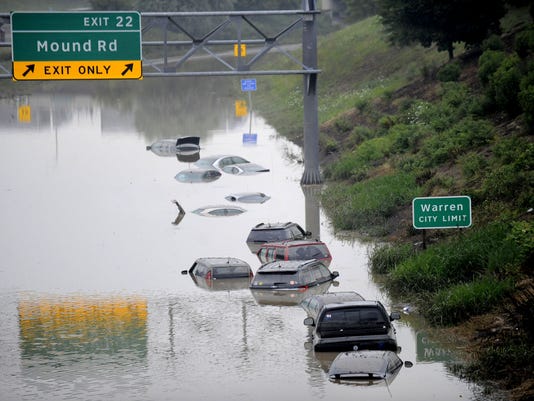 Gov. Rick Snyder has asked President Barack Obama to declare a major disaster for Metro Detroit because of Aug. 11 flash flooding that caused an estimated $1.1 billion in damage — a step that could bring federal help to cities, residents and businesses for their losses.

Help would include temporary housing, home repairs and low-cost loans to cover uninsured property losses suffered by individuals and businesses, state officials said Wednesday. The public assistance also would help local governments recover some of their costs for repairing damage to roads and public buildings such as schools.

The request is the result of a two-week damage assessment of Macomb, Oakland and Wayne counties where the governor declared a state of disaster on Aug. 13 that allowed state resources to assist with the recovery, said Snyder spokeswoman Sara Wurfel.

"So many communities were devastated by the historic flood, and we're looking for every available resource to help them recover," Snyder said in a statement.

The $1.1 billion estimate for residential and commercial damage in Metro Detroit is in a letter that U.S. Rep. John Dingell, D-Dearborn, wrote and plans to send Thursday to the White House with signatures from Michigan's other congressional delegation members in support of the disaster declaration.

"The Michigan delegation will work closely with FEMA and the president to make sure the governor's request is considered on an urgent basis so that affected communities can get the assistance they need," Dingell said.

The governor's declaration is extremely important to Warren, said Mayor James Fouts, where damage tops $200 million, including to city structures and businesses like the General Motors Tech Center. But he said what worries him most are the countless residents heading into winter with damaged homes and broken appliances.

"There are hundreds, if not thousands, of people who cannot afford to replace their hot water heater and their furnace," Fouts said. He said without a major disaster declaration, "we're going to have a human tragedy of an immense proportion."

One of them is Carletta Tukes, a 48-year-old Warren mother of two teenage boys who became unemployed earlier this month. She said she can't afford to replace her furnace and water heater that were lost in the flood.

"I had four feet of water in my basement," Tukes said. "When I went in the basement that evening everything was just floating around. How do we get assistance with our hot water and furnace not working?"

The White House referred questions to the Federal Emergency Management Agency, which will make a recommendation to Obama on Snyder's request.

"We go as quickly as possible," FEMA spokeswoman Sandy Jasmund said, confirming the FEMA has received the application in Chicago, but declining to put a time frame on a decision.

After an initial review by FEMA's regional office in Chicago, it will be forwarded to Washington for further review, Jasmund said.

"These are very populated areas, so there's a lot of data," she said. "We want to make sure that we give it our due diligence."

The Michigan congressional delegation's letter emphasized that "effective recovery is beyond the capacity of state and local governments."

"We urge you to make a federal disaster declaration and provide the requested assistance so that communities across Southeast Michigan can rebuild," the letter reads.

FEMA and the Small Business Administration officials spent 2 ½ weeks in Michigan surveying damage; they wrapped up last weekend. FEMA had seven teams for the individual assistance review and four teams for the public request.

Snyder said local leaders and the Michigan State Police Emergency Management and Homeland Security Division conducted a preliminary assessment of the most severely damaged homes, businesses and public facilities in Metro Detroit from Aug. 26 through Sept. 9.

The state is seeking assistance for both individuals as well as local governments and agencies.

The individual assistance would help homeowners and others hurt by the flooding, while money for agencies would cover damage to infrastructure such as roads, overpasses, equipments rental, state or local overtime and other issues.

If Snyder's request is approved, FEMA would create a joint field office with SBA and the state in Michigan and create disaster recovery centers. Under public assistance requests, FEMA reimburses approved projects at 75 percent and the state is responsible for 25 percent of the costs.

Michigan is among the states that have experienced the fewest number of national disasters in the past 12 years: four since 2002 and one in the last six years.

FEMA has announced 65 natural disasters this year, including 32 for major disasters.

Of 95 disasters approved last year, including 62 major ones, one disaster was declared in Michigan — a June 2013 approval for flooding from April 16 to May 14, 2013, in Allegan, Baraga, Barry, Gogebic, Houghton, Ionia, Kent, Keweenaw, Marquette, Midland, Muskegon, Newaygo, Ontonagon, Osceola, Ottawa, and Saginaw counties.

Before then, Michigan hadn't had a disaster approved for federal funding since severe storms, tornadoes and flooding hit the middle and western parts of the state in July 2008.

Kurt Phillips, 50, of Warren, said he hopes federal aid is approved because even though he and his wife have jobs, they have little disposable income.

"I don't have $5,000 sitting around to fix the furnace," Phillips said. "There's another house around the corner from me that's condemned, and they're living in a camper in the back yard.

"The sewage is gone, but my washer and dryer don't work at all, my furnace don't work and everything I had in basement is ruined," he added. "Now I'm going to the laundromat at least twice a week — I have three kids at home."

Phillips expressed frustration with the long process to get federal aid, especially when the U.S. government readily gives assistance for disasters in other areas of the world.

"We give money away to other countries, but when it comes to your own backyard, we've got to go through hoops to get it," he said. "That's not fair. It's not our fault the sewers backed up."