A state official has confirmed that the brother of Lt. Gov. Brian Calley is a suspect in a hit and run incident Wednesday in Ionia County.

Governor's Office spokesman Dave Murray said John Calley, 26, is the man in surveillance footage of the incident, which police said occurred around 5:08 p.m. Wednesday at the Pilot gas station on South State Rd. in Orange Township on the west side of Michigan.

"It's a police and family matter," he said.

The hit-and-run suspect was identified by tipsters who contacted the sheriff's office after they saw the surveillance photos, according to the Ionia County Sheriff's Office.

"The Ionia County Sheriff's Office would like to THANK all of the Citizens that contacted the Sheriff's Office about the case," a post on the department's Facebook page said. "We have been able to Identify the Subject in the picture from the Pilot Gas Station with your help!"

Police said a 24-year-old Ionia woman was attempting to get back into the passenger side of an SUV driven by the suspect when she was dragged and "then ran over in the gas station parking lot," police said in the Facebook post.

The woman, whom police declined to identify, was taken to the hospital with non-life-threatening injuries, according to police.

Surveillance images inside the gas station, which were released by the sheriff's office, show a man exiting the store, walking to the vehicle and entering the driver's side of the vehicle. Shortly after, the vehicle leaves the pump area and the woman attempts to enter the passenger side.

According to the Michigan Secretary of State's Office, John Calley of Lyons has a lengthy driving record dating back to 2008 that includes numerous speeding offenses and disobeying a traffic control device. His driver's license was suspended from December 2012 to March 2013. 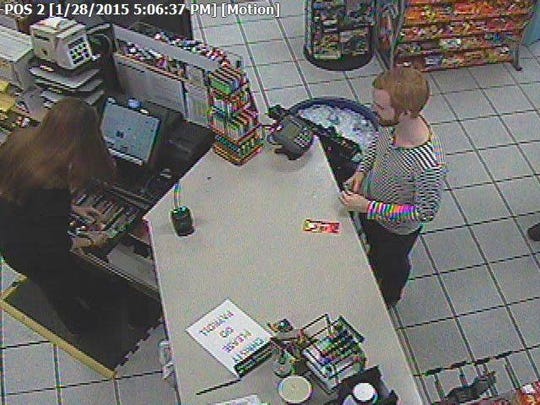