About 148,000 low-income Michigan families will see 15 percent cuts in their food stamp assistance in November under the federal farm bill Congress passed and President Barack Obama signed into law in February. 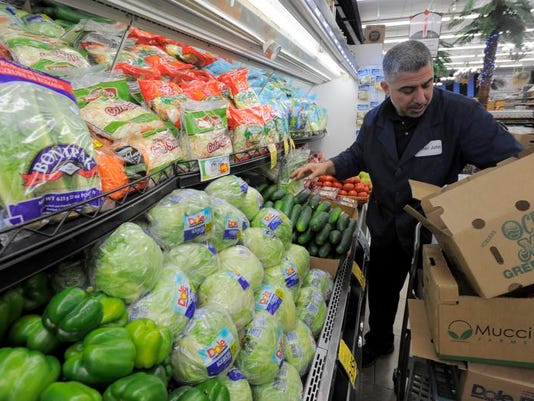 Arkan Sawa places cucumbers in the vegetable bin at the Farmer John grocery store. Some families will see a reduction in aid to food stamps. (Photo: Steve Perez , The Detroit News )Buy Photo

Lansing – — About 148,000 low-income Michigan families will see 15 percent cuts in their food stamp assistance in November under the federal farm bill Congress passed and President Barack Obama signed into law in February.

The food stamp reduction will average $76 a month for a family of four as a federal loophole dubbed "heat and eat" is allowed to expire, Michigan Department of Human Services spokesman Bob Wheaton said Wednesday.

The farm bill eliminated a practice many states used to give extra food aid to families who also received as little as $1 a year in federal energy assistance. Families automatically were given the $1 a year, even if they had no heating costs, so they could get more food stamps, Wheaton said.

Federal law still allows states to give added food help to families but they have to be receiving at least $21 in heat assistance. Wheaton said Michigan human services officials decided against it.

"We said we can't justify the $21 per household for those who don't have heating costs, especially after the tough winter we had last year," Wheaton said. It would cut into the state's federal energy assistance allotment "and be hurting families that need more help" with heating bills.

Michigan expects to get $155 million in federal energy assistance in the fiscal year that starts Oct. 1, down $5 million from the current fiscal year, Wheaton said. The state will kick in another $50 million that comes from utility companies and their rate payers.

A dozen of the 16 states that allowed the "heat and eat" practice — mostly those led by Democratic governors — have taken steps to avoid the food stamp cuts.

It's unclear exactly how many people will be affected by cuts in the four states because officials in Wisconsin, New Jersey and New Hampshire say they don't track the number.

Passage of the farm bill was delayed more than two years by conservatives who insisted on cutting the federal food stamp program, for which one of every seven Americans qualify at a cost of about $80 billion annually. The cuts are a compromise between Republicans and Democrats.

Governors in the 12 states argue they are following the law while maintaining crucial benefits for their neediest residents.

As a result, it's uncertain whether farm bill reforms will generate the estimated $8.6 billion in savings over 10 years that Republicans forecast they would.

States using federal heating assistance money to avoid the food stamp cuts say they believe they can do it without significantly reducing heating aid to others who need it, even without more money from the federal government.

Peter Merrill, the deputy director of MaineHousing, estimates that maintaining the food stamp benefits will reduce federal heating assistance payments to Maine residents about $4 a year on average.

In Washington state, residents will see food stamp benefits reduced briefly, in November and December, because of a backlog in getting their computer systems running. A spokeswoman for the governor said the state will reinstate the higher heating assistance payments in January, once the backlog clears, and 200,000 residents will see their benefits go back up.

On Capitol Hill, Republicans say the states' decisions don't mean the farm bill cuts are obliterated. A GOP memo from the House Agriculture Committee staff notes some states may reverse their decisions to avoid the cuts, especially as current recipients move off the rolls.

The Congressional Budget Office, which calculates what legislation will cost, accounted for some states bowing out when coming up with its $8.6-billion savings estimate.

At the same time, the budget office hasn't said whether it took into account high-population states like California, New York and Pennsylvania maintaining the higher food stamp benefits.