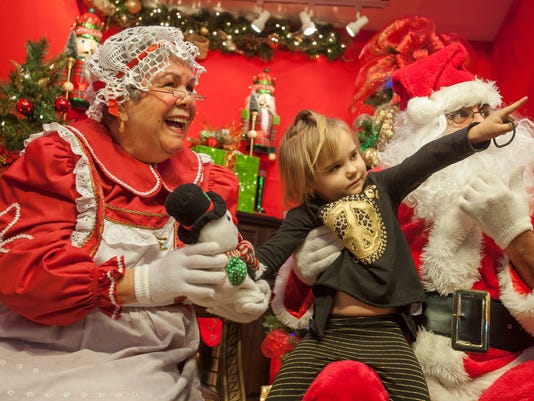 Toni Patterson arrived at a day care center, clad in a red dress and white apron. She started to shake her jingle bells.

The kids eyes widened and mouths dropped open. Many ran up to her and threw their arms around her.

"They know I am not Santa Claus, but they know I am part of him," said Patterson, a Livonia resident who has been playing the part for more than 20 years.

For years, she has been an afterthought; the woman behind the great man.

But Mrs. Claus is coming of age and breaking the ice ceiling at the North Pole.

No longer behind the scenes, she can now be found out on the town — sometimes by herself — rewriting a backstory that for centuries has starred her husband.

If you doubt her burgeoning presence, drop by the world's oldest Santa school in central Michigan: The class for Mrs. Santa Claus was triple the size this year from years past.

Mrs. Claus, and Santa entertain seniors and their families at American House. Jose Juarez, Special to The Detroit News
Fullscreen

Mrs. Claus, played by Julie Campbell, entertains a table of seniors during a holiday event at American House. Jose Juarez, Special to The Detroit News
Fullscreen

Julie Campbell, aka Mrs. Claus, encourages a family to be nice this holiday season. Jose Juarez, Special to The Detroit News
Fullscreen

Mrs. Claus, played by Julie Campbell, sings holiday songs with Brooklynn Lapp, left, 8, and her sister, Shelby, 6, during a holiday event at American House. The Lapp sisters are from Canton and were visiting their great-grandmother. Jose Juarez, Jose Juarez
Fullscreen

Julie Campbell, aka Mrs. Claus, and Desteny Jackson, 4, hug. Desteny was at American House to visit her great-grandmother. Jose Juarez, Special to The Detroit News
Fullscreen

Santa school officials have their own explanation.

"It makes Santa Claus more real that he has a loving wife," said Holly Valent of the Charles W. Howard Santa Claus School in Midland. "Some children do not see a loving relationship between a man and a woman. At least they can see an example with Santa Claus, who stands for loving in giving."

Often she can be seen beside Santa at parties, malls, nursing homes and schools.

"It's not a job, it's a privilege," said Julie Campbell, who has taken on her role for nearly 20 years. "A lot of kids don't realize there is a Mrs. Santa, and he is married. Her story isn't told as much."

Her priorities are to take care of the children who are scared of Santa and make sure he looks good. At the same time, Campbell said Mrs. Santa is more modern than when she and Santa first married.

When Mrs. Santa appears alone, she is often singing songs, reading books and telling stories to the kids.

And, of course, she is making a list of what the kids want and passing it on to Santa.

It's so much fun for Mary Turner that she has never resented not being in the spotlight.

"It doesn't bother me at all," said Turner, a Lincoln Park resident who has been Mrs. Santa for 25 years. "There are times when the kids want to come to me, and I know it doesn't bother Santa. We share."