Town unites to find 'one of our own'

Chelsea Bruck, 22, was last seen at a raucous Halloween party in French Township

Town unites to find 'one of our own'

Leannda Bruck visits search headquarters for her daughter, Chelsea, in Newport. She vows never to stop searching until she finds her daughter. “She doesn’t belong anywhere else but with her family,” she says.(Photo: Mark Bialek / Special to The Detroit News)Buy Photo

The only thing missing is Bruck herself. The 22-year-old vanished three months ago in the wide open spaces of rural Monroe County.

"People don't just disappear," said her mother, Leannda. "This is not supposed to happen in small-town USA."

Bruck was last seen leaving a raucous Halloween party whose attendees were too drunk or high to help police in their investigation.

With law enforcement stymied and the weeks crawling by with no sign of Bruck, residents have rallied around her family.

Supporters have blanketed the county with 300,000 fliers after businesses donated forests of paper.

Florists and pizzerias from Monroe to Toledo are including the fliers with deliveries.

Crime Stoppers is offering a $25,000 reward for information that leads to her being found. 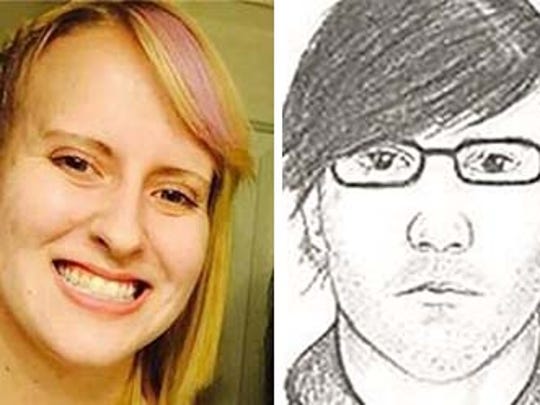 Chelsea Bruck was last seen at a Halloween party with an unknown male depicted in a sketch above. (Photo: Crime Stoppers / Facebook)

Russeau, who doesn't know the Brucks, also created a Facebook event inviting people to tie ribbons around trees. The event drew so many supporters, 4,000, that Russeau had to create a separate page.

"This wasn't just another person missing," she said. "Chelsea is one of our own."

Matt and Leannda Bruck raised a son and four daughters on a 160-acre farm started by his great-grandfather in 1875.

The farm sits on a dirt road just outside Maybee, whose two-block downtown lies in the shadow of a grain elevator.

A welcome sign describes the community of 560 in northern Monroe County as "The Best Little Town in Michigan."

The Brucks' fourth-generation farmhouse has been quieter the past three months.

Chelsea is outgoing and boisterous, said her sister Megan. The family's youngest child, she worked part-time as a restaurant hostess.

"Chelsea is the most sweet, innocent, just-wanted-to-be-loved kind of girl anyone ever met," said Megan.

She loves parties and was excited to attend one Oct. 25.

The annual Halloween get-together, held at a Newport farmhouse eight miles from Bruck's home, was more like a concert than a party, her friends said.

It had a stage, eight heavy metal bands, fireball twirling, a 40-foot bonfire and prizes for best costumes. Among the bands were Psychopathic Daze, Armageddon Awaits and Everything Must Die.

"Everybody was going," said Shaylynn DuVall, a friend of Bruck's who worked with her at Olga's Kitchen in Monroe.

Bruck worked on her costume for three weeks, painstakingly sewing leaves to a green vest, said her mom. She kept its identity secret from her friends.

Adding black yoga pants and a purple wig, she was the Batman villainess Poison Ivy, who killed victims with a kiss.

A purple ribbon in downtown Maybee serves as a reminder the search continues for Chelsea Bruck who has been missing since October. (Photo: Mark Bialek / Special to The Detroit News)

'A lot of new faces'

The Halloween party, hosted by homeowner Mike Williams, was always popular but the one this year drew an unusually large crowd of 600 people, he said.

It also was unruly, with several people kicked out for fighting, said Bruck's friends.

"It was huge, a lot of new faces," said Heather Brooks, who also works at Olga's.

Bruck arrived at 11 p.m. and hung out with a few friends, but they eventually got separated in the big crowd.

At 12:45 a.m., Bruck walked into a wooden post, gashing her forehead and the bridge of her nose, witnesses told police.

Shortly thereafter, she used a stranger's phone to call the friend who had driven her to the party. The friend, who had Bruck's phone, said she was leaving and would give the phone to another friend.

The other friend couldn't find Bruck and she, too, eventually left the party with Bruck's phone, police said.

Around 3 a.m., Bruck was seen leaving the party with an unidentified man. A memorabilia seller who spotted them told police he didn't see anything out of the ordinary, that they seemed to be having a casual conversation.

As Bruck's disappearance turned from days to months, her family struggled for some semblance of normal life.

Her mother no longer stirs awake in the middle of the night. She finally put away her daughter's laundry, which had sat folded in a basket since she went missing.

She returned to her job as a bank teller last week.

Two sisters are preparing for their weddings, Kassie next week and Megan in June.

A former Monroe Bank & Trust in Newport used daily by the family as search headquarters now is open on alternate days.

But Leannda Bruck said she will not stop looking for her little girl.

"If it takes 10 years, we will not give up," she said. "She doesn't belong anywhere else but with her family."

Her daughter is never far from the family's thoughts, especially in a county where her face seems to show up on every street.

Megan Bruck was getting an oil change last month when she spied one of her sister's fliers on the side of the auto shop's computer.

She then stopped at a gas station and a woman pumping gas recognized her from the news and showed her a pile of purple ribbon on her front seat. The woman said she was going to make bows and distribute them to spread the word about Chelsea.

"It's incredible the support and love and prayers we have been receiving," said Megan.

The randomness of Bruck's vanishing unnerves her friends.

They all went to the same parties, said Brooks. They all knew the same people.

If anyone in the group had needed a ride home from a party, it could have been them who left with a stranger, she said.

"It could have been anyone," she said. "And now she's gone and we have no idea how or why or what or who."