She's an inspiration to her teammates, friends, coach 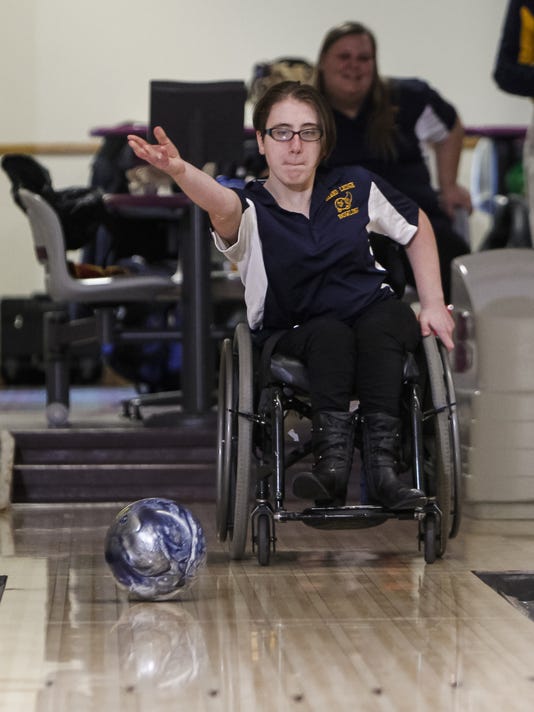 Grand Ledge — Twice a week after school, Caitlyn Wells gets in her sister's car and the two make the nine-mile trip from Grand Ledge High School to Royal Scot Golf and Bowl.

On a recent trip, she rolled her wheelchair into the building, took off her coat, grabbed her ball, and began chatting with her teammates on the high school's bowling team.

A few minutes later, Wells rolled down the ramp, stared down the lane, swung her right arm back at an angle to avoid hitting her wheelchair, and launched the ball. It was a strike.

"My biggest challenge is the swinging (of my arm) and my hand movement," Wells told the Lansing State Journal. "People think the way I bowl is really interesting. They tell me they like the way I bowl. They think it's really fun."

The 16-year-old sophomore was born with spina bifida. The bones of her spine didn't form properly around part of the spinal cord. Wells does not have feeling below her waist.

"One thing about Caitlyn, though, is that she never complains about her circumstance," said Mike Price, Wells' stepfather, who has been in her life since she was 4 years old. "She never puts it anybody's face. It's a task of her life that she deals with and she deals with it well."

Wells' fondness for bowling blossomed when she began competing in a Saturday league at Royal Scot a couple of years ago.

"If I could tell one person why I like to bowl, I would tell them that I just really enjoy it," she said, "and that I like to be around my friends. It's fun."

Wells bowled a 17 when she tried out for the team. She made the cut.

At her brother's birthday party recently, she bowled a 99.

"She does beautiful," Lawson said, "and just her attitude, the way she keeps everything up, really helps out the team."

Prior to joining the Grand Ledge bowling team, Wells said she had difficulty, at times, finding a sense of belonging.

"I had a hard time interacting with people," she said. "The feeling I get when I come to bowling, from my teammates and coaches, is that they are always happy and excited. They love to bowl. It makes me feel happy and want to do it, too."

Price said bowling "has helped her be a little more social, get out there, and experience some different things, facing challenges and adversity and having to work through them, something she might not have had to necessarily do in the past."

Hannah Belen is one of Wells' longtime friends. They used to bowl together on Saturdays. She's now a teammate, and she has noticed a shift in Wells' outlook on the sport and on life.

"She has a more positive attitude," Belen said. "She's a lot happier, she's not as frustrated, she trying harder. … She's doing really well.

"She inspires me by not giving up when other people would give up right off the bat," she said. "She inspires our team by trying her best and always making an effort."

According to Michigan High School Athletic Association representative Geoff Kimmerly, there have only been a handful of athletes who have competed with a mobility aid since 2003-04, when bowling first became an MHSAA sport.

Wells hopes that she can one day motivate student athletes in similar circumstances to go out and pursue what they love.

"I would like to inspire people to do what they want to do and just push themselves ahead to do it and enjoy it," Wells said. "I'm really motivated. I don't want to be limited, and I want to go for what I want to do."

Lawson appreciates the drive and persistence Wells shows on a day-to-day basis. And if you ask him, he'll tell you that Wells has been more than worthwhile addition to the team.

"The only (difficulty) we have with her is getting up and down the ramps," Lawson said. "Her personality is outgoing, and what I love about her is that she never says 'no' and 'I can't.'

"She does everything she can do, and what she wants to do."