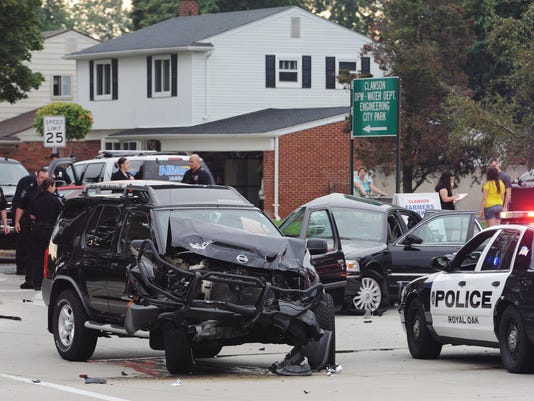 Road safety officials say “there’s seldom one single cause” for vehicle crashes, which have risen in the area in recent years.(Photo: Brandy Baker / The Detroit News)Buy Photo

The seven county metro region continues to see a rise in fatal traffic crashes, according to a report released Thursday morning by the Southeast Michigan Council of Governments.

The report also shows a rise in the total number of crashes for the second year in a row.

According to SEMCOG, there were 371 fatalities and 136,636 crashes in Wayne, Oakland, Macomb, St. Clair, Monroe, Washtenaw and Livingston counties in 2014.

More than half of the metro area traffic fatalities in the last five years were from single-vehicle crashes.

A partial break down of the fatal crashes shows:

"To stem the needless loss of life in our region, we must take a broad approach to improving the safety of our transportation system and to making small but potentially life-saving changes to our personal behavior," said Kathleen Lomako, executive director of SEMCOG.

Over the past five years, pedestrian and motorcycle fatalities are up 38 percent and 31 percent, respectively, but while the number of total crashes involving bicyclists decreased in the metro area, the number of fatalities (12) rose in 2014.

The aim of the task force is to create a plan that identifies safety needs and then guides decisions to reduce fatalities and serious injuries on area roads.

According to SEMCOG, personal behavior behind the wheel is also a major cause of traffic crashes. SEMCOG recommends that drivers and passengers always wear safety belts and wear helmets when riding a motorcycle or bicycle.

Other suggestions include obeying all traffic laws, be courteous behind the wheel, don't tailgate, wear bright clothing when walking, cycling or riding a motorcycle and refrain from texting while driving.

Traffic crash data is available through the transportation section of Community Profiles on SEMCOG's website with more detailed analysis coming to the website in the near future.