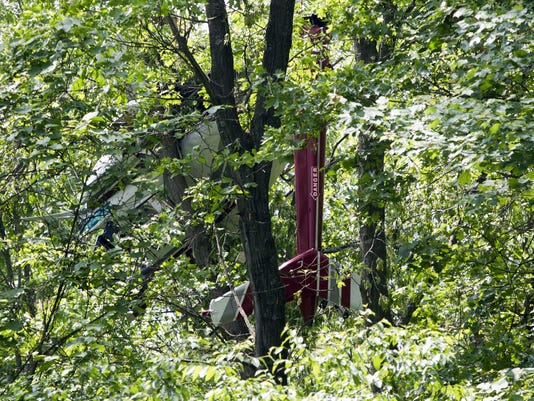 A small helicopter has crashed into a tree in in Caledonia, in western Michigan and is stuck in its branches Friday, May 29, 2015. No injuries have been reported.(Photo: Cory Morse / The Grand Rapids Press)

Caledonia — Strong tree branches may have saved two men from injury or death after their helicopter crashed late Friday morning in western Michigan.

The men, contracted by Consumers Energy, were doing visual inspections of overhead power lines from inside the Bell 206B when the helicopter went down just before noon in Caledonia, southeast of Grand Rapids.

“If they had a mechanical issue or anything that drove them to the ground, they probably would’ve hit much harder and at that point, who knows, it might’ve been a different story,” Caledonia Fire Chief Brian Bennett said. “But in this case all things turned out really well and they’re not injured.”

They were able to disconnect the helicopter’s battery and fuel supply after getting lodged in the tree. A bucket truck helped them down from their 80-foot perch.

Brenda Hanna spotted the helicopter hovering at the end of her block as it struggled to stay airborne.

“The helicopter was flying really low, so we were concerned, but thought they were just looking for somebody,” Hanna told WOOD-TV. “Next thing we know, it started to spin, and then it was spinning more and then it went dead.”

The cause of the crash was under investigation. Damage to the helicopter was described as “substantial” by the Federal Aviation Administration.

A crane will be used to remove the helicopter from the tree.