Michigan was one of 12 states in which the poverty rate declined in 2014, but Detroit remains most impoverished. 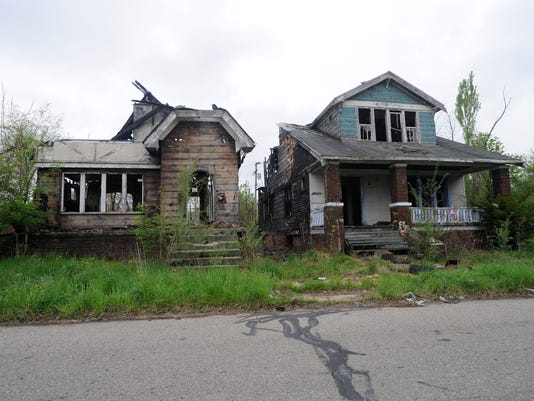 Detroit plans to spend $1.7 billion to tear down abandoned houses like these on Georgia near Maxwell.(Photo: David Coates , The Detroit News )Buy Photo

Michigan is among 12 states that saw a decline in the percentage of people living in poverty in 2014 though the state’s poverty rate remained higher than the national average, according to a U.S. Census Bureau report released Wednesday.

Detroit was the most impoverished major city in America with 39.3 percent living below a poverty line of $24,008 for a family of four. But Flint topped the list of Michigan’s poorest cities with 40.1 percent of residents living in poverty.

Michigan’s poverty rate declined from 17 percent in 2013 to 16.2 percent last year, according to the annual American Community Survey. The national poverty rate was 15.5 percent, roughly the same as in 2013.

Results of the survey showed that most Americans have experienced few economic gains despite growth in the U.S. economy, experts said. The census report marked the fourth consecutive year in which the number of people in poverty was not statistically different from the previous year’s estimate.

“The economic recovery is not yet affecting poverty or wage levels,” said Laura Lein, dean of the School of Social Work at the University of Michigan. “It’s simply not affecting the part of the population that is economically challenged.”

Outstate, poverty increased slightly in Kalamazoo and Grand Rapids, but not by a statistically significant percentage.

Median income remained stagnant across Metro Detroit, with the exception of a slight increase for residents in Rochester Hills.

“Most of the growth in income has been happening among the affluent and very little of it has been floating down to people at the lower income level,” said Richard Lichtenstein, associate professor of health management and policy at the University of Michigan’s School of Public Health.

According to census officials, the nationwide drop in the number of uninsured was driven largely by implementation of the federal Affordable Care Act in 2014.

“The uninsured rate fell both because (more) people received Medicaid and from direct purchase (of health insurance),” Jennifer Cheeseman Day, an assistant division chief in the Census Bureau’s social, economic and housing statistics division, said in a conference call Wednesday with media.

The largest declines in the number of uninsured were in states, including Michigan, that expanded Medicaid under the federal Affordable Care Act, according to the report. The percentage of Michigan residents without health insurance dropped to 8.5 percent in 2014 from 11 percent in 2013.

Massachusetts, where Medicaid was expanded to include low-income people, had the fewest uninsured last year with 3.7 percent not covered. Texas, a non-expansion state, had 22.1 percent uninsured.

Lichtenstein of the University of Michigan noted that 33 million Americans remain without health insurance coverage.

“In my mind as a public health person that’s still scandalous,” he said. “I would like to see more people covered, and better protected financially through their insurance.”

Here are the U.S. cities with the highest 2014 poverty levels: