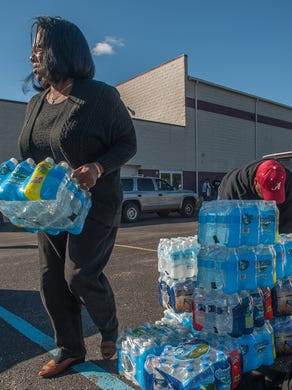 Church members Izamae Payne, left, Melvin Gillespie and Robert Burns load water into cars in Flint at the House of Prayer Missionary Baptist Church, which was giving away bottled water to city residents on Wednesday Sept. 30, 2015. Researchers said last week that lead levels in local children have risen since the city started getting its water from the Flint River instead of the Detroit Water & Sewerage System. Studies showed that in some areas lead levels doubled and, in two local zip codes, the levels tripled. John M. Galloway, Special to Detroit News
Fullscreen

Church member Paula Pruitt directs traffic off Carpenter Road toward House of Prayer Missionary Baptist Church, which gave away bottled water to Flint residents. Water quality has become the central issue in the mayoral election that is a month away. John M. Galloway, Special to Detroit News
Fullscreen

The Flint River near the city of Flint water plant. Tapping the river for a year or two was supposed to provide water until the Karegondi Water Authority was up and running. Almost immediately after the switch in April 2014, there were complaints about the treated river water’s appearance, smell and taste. David Guralnick, The Detroit News
Fullscreen

This is a water testing bottle available to the public from the Flint water department. The city is giving out these bottles for residents to use to collect samples of their drinking water for testing. David Guralnick, The Detroit News
Fullscreen

Cases of water are ready for distribution to Flint residents at the House of Prayer Missionary Baptist Church. John M. Galloway, Special to Detroit News
Fullscreen

A palette of gallon containers of drinking water that will be distributed by the Food Bank of Eastern Michigan in Flint. David Guralnick, The Detroit News
Fullscreen

Flint — The questionable quality of the city’s drinking water made headlines again this week, but not much of it has been news to Ashley Holt.

For almost a year, the water from her faucet has looked “like urine,” smelled “like the sewer” and, if you’re brave enough to sip it, hasn’t tasted “normal,” the 25-year-old Flint resident said. It’s why she’s limited for months how often her children — ages 5, 6 and 12 — come in contact with it.

But following last week’s revelation that Flint children are showing higher amounts of lead in their blood, the situation has escalated for her cash-strapped family.

In a city where 41.5 percent of the population is below the poverty line, a lack of money is the reason Holt was walking instead of driving downtown this week to pick up her children from school. She scrambles to find enough to buy them bottled water.

“The only option I’ve got is just to not drink the water and stick with pop and juice,” Holt said. “(I) go to the store and get a gallon of water a day, if I can afford it at the time.”

The hardships experienced by residents here are having public health and political ripple effects that are being felt from city hall to the governor’s office. Gov. Rick Snyder said Tuesday he could unveil “more action steps” as early as the end of this week.

Researchers from Virginia Tech and Hurley Children’s Hospital in Flint said last week that lead levels in local children have risen since the city, under Snyder’s appointed emergency manager, started getting its water from the Flint River instead of the Detroit Water & Sewerage System. Studies showed that in some areas lead levels doubled and, in two local zip codes, the levels tripled.

Lead poisoning can cause learning disabilities, according to the Centers for Disease Control and Prevent. At very high levels, it also can lead to seizures, coma and even death.

Water quality has become the central issue in the mayoral election that is a month away. It also has put Snyder’s administration — particularly the Michigan Department of Environmental Quality — under the microscope. There are questions about how the DEQ tests water quality, as well as the governor’s back-channel efforts this summer to send 1,500 water filters to Flint families when state officials insisted the water was fine.

Sommer Adams said there are doctor’s visits in the future for her three kids because she fears they may have been exposed to lead.

“Even though I don’t see it in my water or haven’t experienced no type of (problems) with drinking it, you never know,” said Adams, 23.

The idea of switching water systems seemed to make sense. Municipal officials didn’t like the rates residents were forced to pay and wanted to be part of a new supply system being built to draw from Lake Huron, just like Detroit’s system.

Tapping the river for a year or two was supposed to provide water until the Karegondi Water Authority was up and running. Almost immediately after the switch in April 2014, there were complaints about the treated river water’s appearance, smell and taste.

A year later, the state-appointed successor emergency manager, Jerry Ambrose, rejected the city council’s attempts to tie back to the Detroit system as “incomprehensible.”

“(Lake Huron) water from Detroit is no safer than water from Flint,” Ambrose said at the time.

The Snyder administration’s confirmation Tuesday that it helped an anonymous donor send 1,500 water filters to Flint families seemed to undercut the decision. At an unrelated Wednesday press conference, the Capitol press corps grilled the governor about Flint’s woes.

“It appears that lead levels could be higher or have increased... ,” Snyder said. “We’re looking at making sure they’re within safe limits, according to the federal government.”

The water problems have ratcheted up interest in the Nov. 3 mayoral election, which figured to draw more scrutiny anyway since Flint emerged from state control in late April.

Business owner and candidate Karen Weaver has attacked incumbent Mayor Dayne Walling for failing to take back total control of the government from the city administrator left in place by the state’s emergency manager. After the reporting of the lead results, Weaver has claimed that Walling knew about the problem as far back as June, thanks to a U.S. Environmental Protection Agency report that flagged the situation.

“You didn’t speak up,” she said Wednesday. “Yes, the emergency manager had power to make the final decision, but nobody takes your voice.”

Walling countered that the first time he heard of the elevated lead levels was Sept. 21, a few days before the results were made public.

“I’m asking everyone to carefully consider my record because it has been a complicated four years with four different emergency managers that each involved myself and city council in different ways at different times,” Walling said.

Shervon Goss, 32, paints a disturbing picture of what she experiences in her townhouse complex in Flint’s south end. Her tap water has an odor, Goss said, and showers result in dry skin and rashes.

“It’s a complex with a whole lot of people and a whole lot of babies there,” she said. “These are people who probably can’t afford to go and buy bottled water. So they get forced into drinking the (tap) water that’s unhealthy.”

State officials admitted it is difficult to do consistent lead testing on water being pumped through old lead plumbing and service connection lines. Water tested at intake or upon release from the treatment plant can be exposed to lead when it reaches old lead connections on private property, the officials said.

“The testing protocol that we have tends to offer a systemwide assessment of how water interacts with that line and home plumbing,” said Brad Wurfel, DEQ’s spokesman. “There’s a lot we unfortunately don’t know about those (home lead) levels.”

Some local groups have stepped up to provide free water to residents. The House of Prayer Missionary Baptist Church gave away bottled water Wednesday, drawing a line of cars.

On Thursday, the Food Bank of Eastern Michigan will ship packages of diapers combined with gallon jugs of water to area social service organizations.

Local activists are prepared to hold protests and urge residents to stop paying their water bills if state and city officials don’t make the switch back to water from Detroit, said Rev. Alfred Harris, pastor of Saints Church in Flint.

“We’re praying that the governor will say we’ve got to go back to Detroit water,” Harris said.