Temps expected to climb in time for Thanksgiving

Some still without power due to snowfall; warmup, rain by end of week

Temps expected to climb in time for Thanksgiving 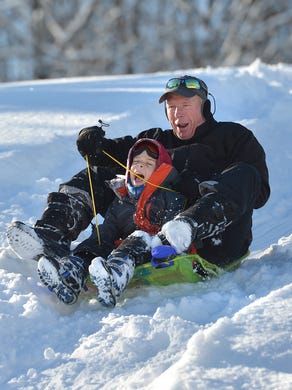 Jay Fitzgerald and his son Jack, 6, of White Lake, enjoy sledding the morning after the first snowstorm of the season Sunday, Nov. 22, 2015 at High Recreation Area. Bryan Mitchell, Special to The Detroit News
Fullscreen

A crew member uses a snow-making machine, adding more snow on top of the foot that fell during Saturday's snowstorm at Alpine Valley Ski Resort. Bryan Mitchell, Special to The Detroit News
Fullscreen

A peaceful winter scene at the wind picks up blowing snow at Highland Recreation Area the morning after the first snowstorm of the season. Bryan Mitchell, Special to The Detroit News
Fullscreen

Jeeps at a dealership sit covered in snow the morning after the first snowstorm of the season in White Lake. Bryan Mitchell, Special to The Detroit News
Fullscreen

Dale Findley digs out his long driveway after getting hit with eight or more inches of snow at his home in Highland, Michigan. Brandy Baker, The Detroit News
Fullscreen

The municipal complex sits covered in a thick blanket of snow in Rochester Hills. Brandy Baker, The Detroit News
Fullscreen

Snow covers the stock at Broadview Christmas Tree Farm, which has been in the business of selling trees for over 60 years, in Highland. Brandy Baker, The Detroit News
Fullscreen

Snow covers the stock at Broadview Christmas Tree Farm, which has been in the business of selling trees for over 60 years, in Highland. Brandy Baker, The Detroit News
Fullscreen

A pedestrian walks near the public library in the first snow of the year in downtown Royal Oak. Charlotte Massey, The Detroit News
Fullscreen

Saul Ruic shakes snow off evergreen grave blankets he was selling at the Royal Oak Farmers Market as he packs up for the day. Charlotte Massey, The Detroit News
Fullscreen

A worker clears the field prior to the start of the River Rouge game against Ida at Novi High School. Steve Perez, The Detroit News
Fullscreen

Kalah Parran, left, and Brad Laux, both of Ida, try to keep warm as they tailgate in the parking lot of Novi High School in preparation for the Division 5 semi-fimal game. Steve Perez, The Detroit News
Fullscreen

A man walks through the first significant snowstorm of the season in Rochester Hills. Brandy Baker/ The Detroit News
Fullscreen

Children have fun in the snow carrying their new coats during coats4kids event put on by Happy's Pizza and Greater Grace Temple in Detroit. Bryan Mitchell, Special to The Detroit News
Fullscreen

Temperatures were expected to warm up in Metro Detroit this week following the record-breaking weekend snowfall that blanketed the region, knocking out power to some 40,000.

Metro Detroit was slammed with snow, and, depending on the ZIP code, included record-setting totals for a 24-hour period in some areas — for example, 16.8 inches in Livingston County’s Howell — helping to knock out power to thousands, some 10,000 of whom remained without electricity Sunday evening.

Although brisk, with temperatures in the 30s into Monday with a 30 percent chance of snow, temperatures are expected to climb into the 40s by Wednesday and hit the 50s on Thanksgiving.

There could be light snow Monday, but by the middle to end of the week, “we’ll start to work this snowpack off, and it starts to melt it some over the next few days,” said Mike Richter, a meteorologist with the National Weather Service.

Showers, he said, are expected Thursday night and into Friday.

“Tooooooo much in Waterford. I would say about foot. ... Still coming down,” said Bonnie Beacon Jones on The Detroit News’ Facebook page.

Less than two days after Metro Detroit had temperatures in the 60s, the snowfall totals were startling. For Detroit, the 24-hour snowfall of 6 inches surpassed the record of 1.4 inches set in 1893. Flint saw a record snowfall of 10 inches Saturday; its previous record of 4.4 inches set in 1974, said Deb Elliot, a meteorologist with the weather service.

“We don’t traditionally see the big ones like this in November,” said Richter. “The storm was pretty strong. The heavy snowfall really just remained in the same area for just a long duration.”

The National Weather Service offices in White Lake Township got 15.5 inches of snow, Elliot said. The total was the most the office has had in a 24-hour period since it moved to the building in 1994.

Elliott said holiday weather will be cloudy with little chance of rain in the afternoon and evening. Rain is expected Friday.

Saturday’s steady snowfall didn’t lend much of a hand to Michigan ski resorts, but the chilly temperatures helped crews ramp up snow production for this year’s season.

At Nub’s Nob in Harbor Springs, crews opened up the snow guns on Friday for the first time. The weekend storm yielded only a couple of inches, but has people excited about the winter sports season, said general manager Jim Bartlett.

Snowfall amounts? Depends where you live

“It’s a big attitude boost for people,” he said. “It gets folks all fired up and thinking about winter.”

The conditions are vastly different than what most resorts had last year. Early and heavy snowfall allowed many to open before Thanksgiving. Generally, ski resorts aim to open by the holiday weekend or the first weekend in December. The season winds down in early April.

“I doubt we’ll get Thanksgiving or the weekend, but we’ll be trying,” Bartlett said. “Hopefully, we’ll be open by the first weekend in December.”

Boyne Highlands in Harbor Springs and Boyne Mountain in Boyne Falls also got a start on producing snow late Friday and accumulated a couple of inches from Saturday’s snowfall.

Usually about 72 hours of good snow-making is needed to get things up and running, said Erin Ernst, a spokeswoman for Boyne Highlands and Boyne Mountain.

“We always like to open as soon as possible,” she said. “We are making snow at every opportunity we can so we can open up the slopes. We’ll just have to keep our eye on the forecast and see what we can do.”

Meanwhile, about 10,000 DTE customers remained without power by 8 p.m. Sunday. Stephanie Beres, a DTE spokeswoman, said the hardest hit areas are in the western Wayne County and Livonia area.