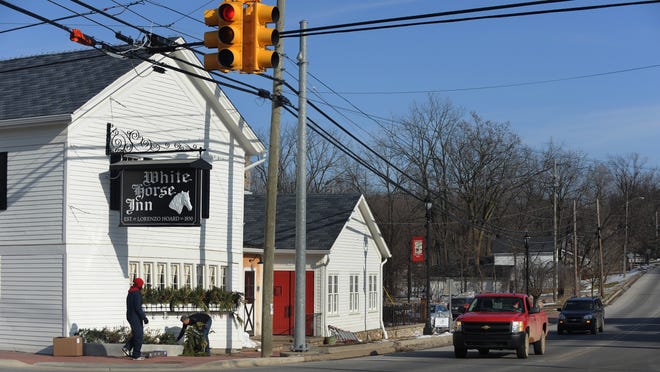 Metamora - Horse carriage rides along tree-lined streets and gently rolling hills are part of the allure of the countryside in southern Lapeer County.

But residents are worried about the clippety-clop of hooves being drowned out by the groan of gravel trucks.

A nearly square-mile gravel mine would swamp this tiny farm town with 100 double-bottom dump trucks a day for 30 years, say townspeople.

Residents also are troubled by one of the groups proposing the mine — the Boy Scouts.

The Boy Scouts’ Michigan Crossroads Council, along with American Aggregates of Michigan, applied for a zoning change in November that would allow mining at a scout camp a mile from the village.

This is the third attempt by the Boy Scouts, who, working with different companies, have been pushing for the project for 31 years.

The proposed 497-acre mine, nearly as big as the town, would extract 30 million tons of sand and gravel over 30 years, according to the proposal, which could be used in the construction of homes and roads.

“Scouting teaches us to be a good neighbor. This isn’t being a good neighbor,” said resident Simon Andzelewski, a former Eagle Scout who began a Facebook page against the project.

In response to the zoning request, the Metamora Township Board of Trustees imposed a four-month moratorium on new mines in December so it could study the issue.

The leaders of three nearby communities have since supported the moratorium during crowded meetings where residents railed against the mine.

Besides the trucks, residents said they’re worried about the noise and dust of the mining operation and the impact on property values.

The Boy Scouts and American Aggregates said the fears are exaggerated.

They’ve compiled 1,200 pages of studies that show the project meets state and federal requirements in protecting the environment, said Chuck Truza, a spokesman for the Boy Scouts.

During earlier attempts to change the zoning, the Scouts were accused by local officials of originally hiding their intention to build a mine, and then trying to “bribe” the township by offering land in exchange for the mine, according to news accounts at the time.

If the mine is built, the dump trucks would lumber down High Street, a two-lane road through the village’s two-block downtown. Trucks headed for the proposed mine would drive east on High, which becomes Dryden Road at the village border, and enter the Scout property from the south.

On the way through Metamora, truckers would pass Pilgrim Presbyterian Church, the Metamora Masonic Center and A Bit Used Tack Shop.

Most of the buildings are from the 19th century, including the White Horse Inn, which, at 165 years, is one of the oldest restaurants in the state.

Residents cling to traditions, including fox hunting, which was brought here in 1928 by well-heeled denizens of Bloomfield Hills and the Grosse Pointes.

“I love the look of it, the hills, the beauty,” said Cindy Fliedner, who moved here from Rochester Hills 13 years ago. “It’s just a magical place.”

In some ways, Metamora is a victim of its beauty.

The same glaciers that sculpted the picturesque hills brought valuable stone to the surface.

The township has four gravel mines, but the Boy Scout one would be larger than the others combined, according to township records.

When the Scouts first asked to extract gravel from the D-Bar-A Scout Ranch in 1984, they didn’t call it a mining operation.

They told the township they were building a lake and had hired Ajax Paving Industries of Troy to remove gravel from the site, according to its plans.

The township rejected the mine, whose 30 acres was much smaller than the recent proposal.

The Scouts filed a federal lawsuit, which they lost. After appealing the case, they reached an agreement with the township in 1991 not to seek a mine for 20 years.

The agreement said the Scouts could file a request sooner if a two-lane road near the proposed mine was widened or if truck traffic on the road increased.

In 2005, the Scouts returned with a new partner, Liberty Sand & Gravel Co., which, like American Aggregates, is a subsidiary of the Edw. C. Levy Co., a construction materials firm from Dearborn.

Arguing that traffic on the road had increased, the Scouts again sought to change the zoning of their camp from recreational to agricultural, which would allow the digging of a 283-acre mine.

A hearing by the Metamora Township Planning Commission in 2005 drew 250 people, 40 of whom spoke. Most were against the project.

The Metamora Land Preservation Alliance, a citizens group that formed in response to the proposal, distributed a petition against it that received 1,200 signatures.

The township rejected the proposed mine for the second time and the Boy Scouts again filed suit, this time in Lapeer County Circuit Court.

The court sided with the township but, after the Scouts filed an appeal, the Michigan Court of Appeals remanded the case back to the lower court in 2009.

By that time, the recession had quelled the demand for gravel so the Boy Scouts allowed the case to lapse, said J. Patrick Lennon, an attorney for Levy.

But last year, with the economy heating back up, the Scouts returned to the township with a new application for rezoning in November.

And, once again, residents are turning out to fight it.

“This is cranking everyone up,” said Wes Wickham, president of the Metamora Area Chamber of Commerce.

Residents accuse the Boy Scouts of shirking their role as caretakers of the environment.

The group’s Outdoor Code calls for members to be conservation-minded and considerate in the outdoors.

Resident Carole Porretta said the Scouts need to become reacquainted with the oath.

Porretta, a real estate broker, lives so close to the camp she once was visited by two Scouts in the middle of the night after they got lost during a hike.

The Scouts insist they’re being mindful of the environment.

A spokesman for Levy said the company has a long record of returning mined areas to their original state and that the Scouts look forward to reusing the land, which is being leased to American Aggregates.

The Scouts said the money they receive for the gravel would help maintain the camp long into the future. They and American Aggregates declined to discuss the project’s finances.

After steep drops in membership and corporate gifts in the early 2000s, the Scouts consolidated their Michigan districts in 2012 and announced in December 2015 they would close five camps this year.

The Scouts changed in another way in 2014. After a 77-year absence, they brought back a merit badge, Mining in Society.

Looking out his back window, resident Rob Champion can see 10 miles of uninterrupted wilderness.

But it’s the view from his front window that is constantly on his mind.

His ranch-style home is across the street from the entrance to the proposed mine.

Besides noise and dust, he’s worried about all the trucks.

A dump truck would enter or leave the mine every three minutes during peak hours, according to the environment impact statement.

Champion, 73, a retired developer, moved here a half century ago for the rural character. That would quickly disappear, he said.

“There’s gravel all over the county,” he said. “They don’t have to go through a town with one stoplight.”

Most local businesses don’t want the mine, either.

The Metamora Area Chamber of Commerce passed a resolution opposing the mine.

An endless procession of dump trucks rumbling past shops and restaurants would dissuade customers from stopping by, said merchants.

The outdoor patio of the White Horse Inn is just 25 feet from the two-lane road running through downtown.

“It will be a disaster, a terrible, terrible thing,” said owner Victor Dzenowagis.

The iconic restaurant closed in 2012 but Dzenowagis reopened it two years later, spending $2 million on its renovation.

With murals and oil paintings of horses, the equestrian décor celebrates a time when the only traffic that passed the restaurant was four-legged.