Officials hope to tear down as many as 200 homes before they’re finished with a federal grant program. 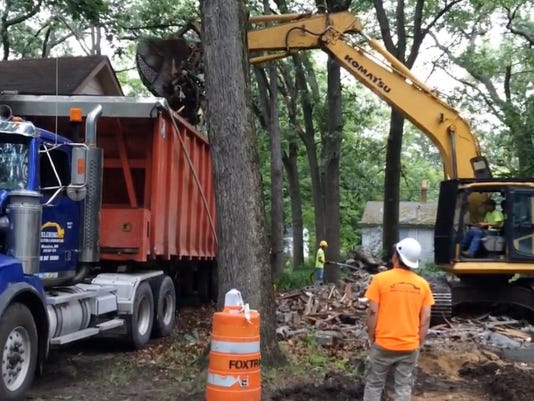 ADVANCE FOR SUNDAY, FEB. 28 AND THEREAFTER- FILE- In a July 13, 2015 frame grab from video, crews tear down boarded-up home in Muskegon Heights, Mich. The Muskegon County Land Bank and the city of Muskegon Heights tore down about 60 abandoned homes during 2015 to fight blight. Muskegon County Land Bank Director Tim Burgess said most of the homes demolished were in the west half of the city. (Stephen Kloosterman/The Muskegon Chronicle, MLive.com via AP)(Photo: Stephen Kloosterman / AP)

The work started in July 2015. Muskegon County Land Bank Director Tim Burgess said most of the homes demolished were in the west half of the city. Another 35 homes in the northeast quarter are being prepped for demolition by undergoing asbestos abatementrted.

“The idea behind that was to eliminate problem properties,” Burgess said. “We (also) want to keep the burden off the local units of government.”

Officials hope to tear down as many as 200 homes in Muskegon Heights before they’re finished with a federal grant program.

The city in December 2014 was awarded a $1.8 million federal Hardest Hit grant with the Muskegon County Land Bank Authority acting as its community partner to hold the titles to the properties and help redevelop them.

The U.S. Department of the Treasury created the Hardest Hit Fund in 2010 to provide aid to homeowners in those states most affected by the housing market crash. The fund is focused exclusively on residential properties.

Burgess is confident of using up the $1.8 million in grant money. About 130 Muskegon Heights homes recently went unsold after a tax auction, and roughly three-fourths of them are candidates for demolition.

The homes were owned by Muskegon Heights or Land Bank by way of the county Treasurer’s Office because of unpaid taxes.