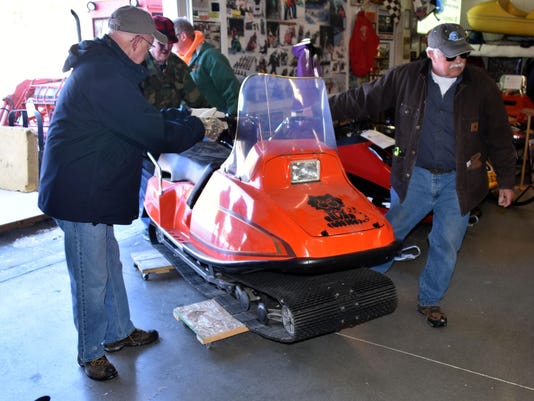 The 33 rare and unique snowmobiles donated to the Top of the Lake museum from Quebec include this 1980 Finncat.(Photo: John L. Russell / Special to The Detroit News)Buy Photo

Naubinway — Winter never ends at the Top of the Lake Snowmobile Museum, which received a blizzard of new sleds for display this week.

Volunteers gingerly unloaded 33 rare and unique sleds donated by the J. Armand Bombardier Museum in Valcourt, Quebec. It was an unexpected gift for the little-known museum outside the snowmobile community, but is considered by insiders to be one of the best in the country.

The new snow machines instantly grew Top of the Lakes’ exhibit inventory by 27 percent, according to John Batchelder, a museum volunteer. The donated machines have an estimated value of $66,850.

The museum consists of 122 snow machines on loan from 50 people with 51 sleds from 1968 or older. Walls are filled with snowmobile memorabilia and filing cabinets burst with brochures and other information.

“We have eight filing cabinets full of articles and manuals of just about every snowmobile made,” Batchelder boasted. “We can answer a lot of questions.”

All year-round visitors can ogle machines that date to a 1926 Model T Ford equipped with treads for snow travel.

The Canadian museum that donated the snowmobiles displays collections of vehicles and other inventions of J. Armand Bombardier, who advanced the creation of such snow machines as Ski-Doo and Lynx.

It wanted to divest itself of sleds that are not products of the Bombardier company, but are still valuable and collectible vintage machines. Sleds made in Russia, Finland and Sweden were all part of the selection given to Top of the Lakes.

“This is quite an honor,” said Charlie Vallier, who has served on the Top of the Lake museum’s board since its founding in 2006. “Our museum is about the history of the snowmobile, which sets us apart from other facilities. We are very thankful and proud of Bombardier’s donation.”

Vallier and his wife, Marilyn, drove 770 miles to Quebec to help load the machines for transport and escort them back to Michigan. They arrived Wednesday.

The Naubinway museum grew out of an annual vintage snowmobile show and ride held in this small fishing town 43 miles west of St. Ignace. In 2003, a few show regulars dreamed of creating a more permanent indoor display for their beloved old snow machines, and the Top of the Lake Museum was born.

In 2006, fundraising for the museum began in earnest and it’s now run by a 10-member board of directors, all volunteers. In 2007, a laundromat in the village closed, providing a building for the museum’s home.

SnowGoer Magazine in 2012 listed the museum as “one of the finest vintage sled museums on the continent.”

With the addition of so many valuable and unique sleds, plans call for building a new wing to house the display. A fundraising campaign has been launched to raise the estimated $70,000 needed; they’ve collected $7,000.

Some of the vintage donated machines are being loaned to other museums for display, with sleds going to museums in New Hampshire, Indiana, Wisconsin and elsewhere in Michigan. Nine sleds will be displayed at Top of the Lake immediately, with 10 in storage until space is ready for them to be displayed.

“I’ve been a collector for 30 years,” Vallier said. “I have over 100 sleds stored at my house, and keep expanding the collection.”

The museum sponsors a fall swap meet in September, and a February Snow and Ride that will celebrate 25 years in 2017.

John L. Russell is a freelance writer and photojournalist from Traverse City.

■Top of the Lakes Snowmobile Museum is a 501 (c)3 nonprofit.

■The museum is waiting on the status of two grants they have applied for, but are taking donations, which can be sent to Top of the Lake Snowmobile Museum, W11660 U.S. 2, Naubinway, MI 49762.