Water lead tests spur debate on who should foot bill

Water lead tests spur debate on who should foot bill

South Lyon Schools found two kitchen sinks at Dolsen, above, and Sayre elementaries had lead levels above the federal limit. “Our school board believed it was important to ... begin testing our water now and share results,” an official said.(Photo: Brandy Baker / The Detroit News)Buy Photo

In the wake of Flint’s water crisis and the discovery of dangerous lead levels in Detroit Public Schools, districts across the state are testing their water supplies.

School officials say it’s a precautionary measure amid concerns with aging pipes that could be leaching lead into students’ drinking water and water used to prepare food.

But as more schools feel inclined to test their water, an even bigger issue is bubbling up: Who should pay for the tests and any remediation to remove lead from water, especially in older schools?

The cost can be daunting. Many school districts reported paying firms $2,000-$7,000 for the testing.

State Department of Environmental Quality spokeswoman Melanie Brown said it has not yet been determined whether the state should help districts with budget problems get their water tested.

Ruthann Jaquette, president of the Michigan Parent Teacher Association, said: “If this is not a state responsibility, I don’t know what is. I think schools have stretched every dollar they could possibly stretch to provide a quality education for children.”

Some results were more alarming than others.

For example, water samples in 15 DPS buildings tested positive for elevated lead levels, including one where a drinking fountain recorded 100 times the allowable limit. In Grosse Pointe Schools, 10 of 130 samples taken at the district’s 15 schools had levels that exceeded federal standards.

“With the recent awareness of, and focus on, water quality issues in Michigan, the state may require schools to test their water in the future,” South Lyon Schools Assistant Superintendent Maureen E. Altermatt said in an email to The Detroit News. “However, our school board believed it was important to be proactive and begin testing our water now and share results with our community.”

Southfield Public Schools officials announced last week their testing found elevated lead levels in four of 67 water samples taken at 17 schools and facilities. A kitchen faucet not used for food preparation at Birney, a men’s breakroom bathroom faucet in the JWE Administrative Center and two drinking fountains at Southfield High / University High — outside rooms 102 and 117 — were found with traces of lead.

Elsewhere in the state, Wyoming Public Schools in Kent County and Bangor Public Schools in Van Buren County recently did testing. Bangor had no excessive lead, and Wyoming found one drinking fountain with elevated lead levels, according to the districts.

Benton Harbor Area Schools officials say they have yet to test their water for lead. School board vice president Joseph Taylor said the district is cash-strapped and under state oversight with $21 million in debt.

The state, he said, should provide stipends to help financially distressed districts pay for the tests.

Taylor plans to suggest lead testing at the next school board meeting.

“When you talk about schools that are financially in debt and in trouble, it’s hard,” Taylor said. “But the most important thing is the safety of our students.”

Alpena Public Schools, which is expected to eliminate its deficit this year, plans to test the water at its nine school buildings this month.

Superintendent Brent Holcomb said the cost of testing should be nominal as staff members are collecting the samples and sending them to a local health department. 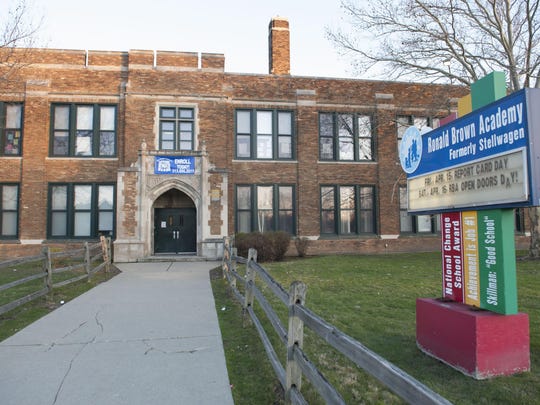 Anthony King, president of the Detroit Area Dads, said after the Flint water crisis and DPS lead issues, there is increased concern among Metro Detroit parents with their children being exposed.

“There is a great concern because you know that people are actually dying because of the lead and copper contamination and some aren’t showing effects until they get older,” said King, who has grandchildren in DPS.

Children are more vulnerable to the effects of lead and often display learning disabilities and slower development. Doctors say children under the age of 3 are at the highest risk.

Mark Przeslawski, whose two sons attend Harrison and Warner schools in the Farmington Hills district, said he usually sends them to school with bottled water. When he learned their schools had elevated lead, Przeslawski said he advised his children not to drink out of the water fountains.

“I’m glad they are doing the testing,” Przeslawski said. “But I was surprised that it was at their schools because the two that my kids are at are two of the newer schools.”

The district had follow-up testing done April 30; those results are pending.

Gov. Rick Snyder is pushing for reforms that would require schools to test their water for lead every year. He proposed $9 million for school lead testing in his executive budget. Snyder is also lobbying for a reduction in the lead action level from 15 parts per billion to 10 ppb by 2020.

The state released a guide in February for schools who wish to test their water.

It includes tips on reducing lead in drinking water, how to conduct testing, and what schools should do once they get their results. The guide also encourages schools to create a communication plan to advise employees, students and parents of the results and ensure that fixtures containing lead are clearly marked if the district turns them off.

However, state officials say they are not tracking which school districts in Michigan have tested their water for lead since the Flint water crisis.

The other issue was funding for infrastructure improvements.

Many of the schools conducting lead tests have old classroom buildings and aging pipes that pose a higher lead risk.

Wotruba said school districts can only use sinking funds and bond issues approved by voters to improve infrastructure.

“Where does money come from?” he said. “Absolutely, children’s safety has got to be paramount but at the same time if the state is going to require that, they have to help us find solutions to fix the problems.”

The state says it plans to work with districts to discuss ways to pay for improvements and lead testing.

“We will be reviewing what the costs are for all of this and work with the local municipalities or school districts to determine how everyone involved can best share the cost of this necessary public health improvement,” Brown said in an email.

Brown also said state officials were determining which reforms it could make to the federal Lead and Copper Rule and which would need legislative approval.

Arch Environmental Group of Farmington Hills has tested for lead in 35 Michigan school districts in the past three months, including Redford and Farmington Hills, said Scott Staber, the firm’s president.

Redford Union had water tested at all seven of the district’s buildings in March and there were no excessive lead levels, Superintendent Sarena Shivers said.

Most of Redford’s schools were built in the late 1940s and early 1950s, school officials say. The district paid Arch Environmental about $2,000 for the test, according to Chuck Martin, director of facilities and transportation.

“It’s important for us to be able to ensure our staff and students and families that we are addressing any issues and concerns that they may have and based on what has happened in Flint,” Shivers said. “Anytime you have an older home or older building or facility, you need to check those things.”

Bangor Schools Superintendent Dennis Paquette said his district paid a smaller fee— around $200 — for the testing because officials only ordered four samples from the three school buildings.

But even if it was more, Paquette said it’s a worthwhile investment.

“Whether we have a surplus in our fund balance or we have a deficit, our No. 1 job before anything else is to make sure our students are safe,” Paquette said. “And that comes even before educating them.”