Jackson — Was Junior Pepper failed by the criminal justice system?

When the 1-year-old died a year ago, Scott Jurewicz immediately became a suspect, said police. Jurewicz, who was dating Junior’s mother, was already under investigation in the death of another infant.

Jurewicz, 28, was eventually charged in the earlier case, but it was too late for Junior. The arrest came one day after Junior’s death.

Jurewicz, who remains a suspect in Junior’s death, was charged with murder and child abuse in the death of 1-year-old Brenden Hartranft in March 2015. He is scheduled for a pretrial hearing June 10 in Jackson County Circuit Court.

The two deaths occurred nine weeks apart. Jurewicz has not been charged in Junior’s death.

“There are so many people who could have stopped it,” said Junior’s grandmother, Dana Allison of Ypsilanti.

The Jackson County Prosecutor’s Office didn’t file criminal charges in Brenden’s death until it received the autopsy, which took nine weeks for the Washtenaw County Medical Examiner’s Office to complete.

But critics said the prosecutor already had enough evidence for probable cause, including preliminary medical findings by two doctors, and oral and written statements from Jurewicz that he had “shaken” Brenden.

Meanwhile, the state Children’s Protective Services knew Jurewicz was a murder suspect while he was living with Junior and his 3-year-old brother.

The agency could have sought to remove the children from the home but instead advised Junior’s mother, Andrea Conaway, not to leave them alone with Jurewicz, said officials.

The CPS now acknowledges its response was inadequate.

“We learned some things that in the future may result in cases being handled differently,” said Bob Wheaton, spokesman for the state Department of Health and Human Services, which oversees CPS.

After Junior’s death, 75 CPS and other child welfare workers in Jackson County received training in how to handle similar incidents, said Wheaton.

Meanwhile, Conaway had ignored warnings from the police, CPS, a private therapist and her own family about allowing Jurewicz near her children, according to interviews and court records.

A Jackson County probate judge said Conaway put her need for companionship before her children’s safety. Judge Diane Rappleye made the comments in October when she terminated Conaway’s parental rights over her surviving 3-year-old son.

“This is a pathetic case of parenting,” said Rappleye, according to a transcript of the hearing. “It was a complete lapse of any parenting skills or intellect.”

But Conaway, 23, blamed law enforcement officials for her son’s death, saying they should have locked up Jurewicz faster.

“They helped kill him by letting Scott walk the streets for nine weeks,” she told The Detroit News. “They knew he was around me. They knew I had two little boys. They knew he was staying the night at my house a few nights a week.” 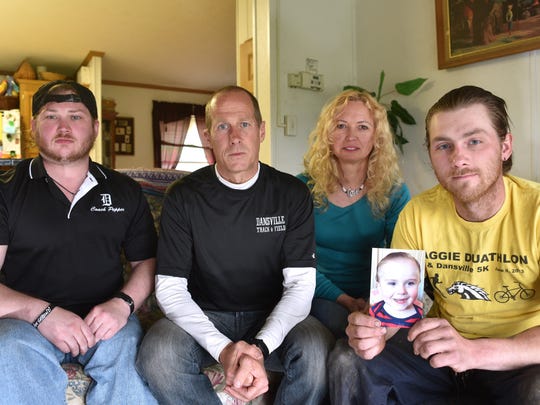 Moved in after a month

A month later, she and her three kids moved in with him after the Hartranfts were evicted from their apartment.

In March 2015, Jurewicz was putting Brenden to bed while Hartranft was doing laundry in the basement, she told police, according to a Blackman-Leoni Township police report

Brenden was crying, which wasn’t unusual, she said. The infant cried every time Jurewicz held him, which irritated Jurewicz, she said.

Five to 10 minutes later, Jurewicz came to the basement, took a few puffs of a cigarette and said he had to use the bathroom, she said.

A minute later, Jurewicz returned with the lifeless body of Brenden.

During his interview with police, Jurewicz said he had changed Brenden’s diaper and put him in his playpen.

When the infant continued to cry, an admittedly frustrated Jurewicz said he “snatched” him up and “gave him a good shake,” according to the police report.

After the interview, Jurewicz gave police a written description of what happened that night.

“After 10 mins of crying I got upset and picked Brenden up and shook him & put him back down harder then I should have,” he wrote in the March 15 note.

Jurewicz originally told police that, when he left the room, Brenden was drinking from a sippy cup he had given him, according to the police report.

He later said he had left the cup on Brenden’s chest but the baby never reached for it.

Also, he originally told police he checked on Brenden because, on his way to the bathroom, he heard the infant gagging, according to the report. He later said he heard no such noises.

“I went back upstairs because I was worried I might have hurt Brenden,” he wrote in the note.

But Jurewicz told police he didn’t think his actions killed the baby.

Jurewicz declined to be interviewed for this story.

Dr. Lisa Markman, a pediatrician who is associate director of the child protection team at C.S. Mott Children’s Hospital in Ann Arbor, said in a medical report that Brenden suffered abusive head trauma.

“I am concerned that he has an injury to his cervical spinal cord leading to an acute respiratory arrest,” she wrote in the March 18 report, which was included in the police report.

But Wilson told Merritt the findings were “very preliminary” and she would need to make more detailed findings in the coming weeks, the detective wrote in the March 18 email.

Merritt’s emails were obtained by The Detroit News through a public records request.

Based on the doctors’ findings and Jurewicz’s statements to police, county prosecutors had enough evidence to bring charges right away, said Eric White, Blackman Township attorney.

“It’s so sad. But for the incompetence of that office, the second child would be alive,” White said in an interview.

On April 15, Rezmierski emailed Wilson to check on the status of the autopsy.

Wilson responded the cause of death was consistent with abusive head and neck injuries but she needed another week or two before finishing the report, according to emails Rezmierski shared with Merritt.

But the report wouldn’t be finished for another six weeks and apparently was hastened by the death of a second infant.

On the morning of May 21, Conaway found Junior face down in his playpen. He was dead.

She said she last saw him alive the night before, when she and Jurewicz put him to bed around 9:30.

Jurewicz, who had spent the night, began to cry after finding Conaway holding her dead son, she said.

A preliminary autopsy found Junior died from blunt force trauma to several parts of his head, according to a CPS petition to terminate Conaway’s parental rights.

Conaway said authorities told her the baby had been beaten and smothered.

On the day of Junior’s death, Rezmierski called Wilson and, failing to reach her, emailed her the following day.

Rezmierski said she needed the final autopsy because the suspect in the case was now suspected in another death, according to a copy of the email shared with Merritt.

“This matter is now urgent,” she wrote. “For the safety of our community we need to have this autopsy report as soon as possible.”

Wilson sent the final report later that day, nine weeks after the death.

Wilson and Rezmierski declined to comment for this story.

Jurewicz and Conaway had begun seeing each other after he contacted her through Facebook on April 15. They knew each other through Jurewicz’s younger brother.

Jurewicz congratulated her on having two children and asked if she ever wanted to hang out with him and his kids.

Two days later, they hung out at a city park, and Jurewicz and his kids stayed at Conaway’s home that night, she said.

Three days after that, Merritt warned her Jurewicz was dangerous and she shouldn’t leave her children with him, said the CPS petition.

Merritt had arrested Jurewicz for violating the PPO and, because Conaway’s 3-year-old son was in the truck at the time of the arrest, she had to come pick him up.

So many warnings were missed in the case, said Junior’s father, Jesse Pepper, who broke up with Conaway before his son was born.

“This death should not have happened,” he said.

On May 7, CPS received a complaint that Jurewicz, a suspect in a child’s death, was now involved with Conaway’s family.

A CPS investigation found Jurewicz sometimes lived with Conaway and spent time alone with her children while she ran errands, a CPS worker testified in court.

When the investigator mentioned Jurewicz being a suspect, Conaway said she trusted him and wasn’t worried about him hurting her kids, according to the testimony. She told others that Jurewicz told her the death was an accident, that Brenden had choked on noodles.

CPS responds to such situations in several ways, including advising the parent, asking a judge to temporarily remove the kids from the home, and having the judge permanently terminate parental rights, said Wheaton.

The agency’s response depends on how much of a risk it believes there is of an adult abusing the children, said child welfare experts.

In determining the risk, the CPS considers whether the adult had previously abused a child, how serious was the abuse and how long ago it happened, said the experts.

In Jurewicz’ case, he was a suspect in the death of an infant seven weeks earlier.

Tobin Miller, chief investigator of the state Office of Children’s Ombudsman, which investigates complaints about the child welfare system, said CPS’ decision to advise Conaway not to allow her children to be alone with Jurewicz didn’t go far enough.

“Just looking at the safety factors, people can draw their own conclusions,” he said, “but a lot of factors mandated a decision to protect Jesse (Junior) Pepper.”