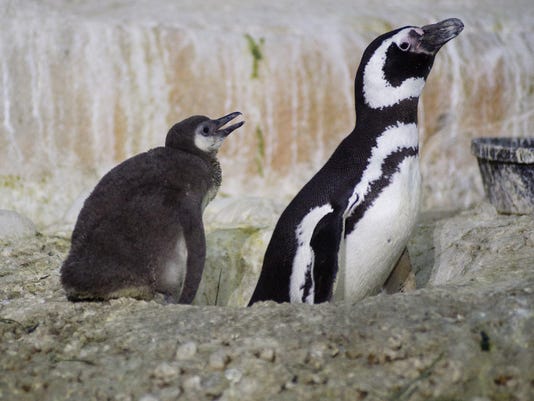 A baby Magellanic penguin, left, waits to be fed at John Ball Zoo on Wednesday, May 18, 2016.(Photo: Neil Blake / The Grand Rapids Press)

Grand Rapids — A baby penguin at John Ball Zoo in Grand Rapids is being raised by foster parents as part of an effort to improve its chances of survival.

The Grand Rapids Press reports the mother laid two eggs. Zookeeper Kristi Koole says sometimes the chance of survival isn’t as good for the baby from the second egg, since the parents can be preoccupied with the first one.

In this case, the second egg was given to foster mom Rio and her mate, Rascal. Koole said the arrangement isn’t common, but is done if needed.

Koole says the number of baby penguins born at the zoo varies. Last year, two were born. In 2014 there were five. Currently, the zoo has 26 adult penguins, two babies and one on the way.