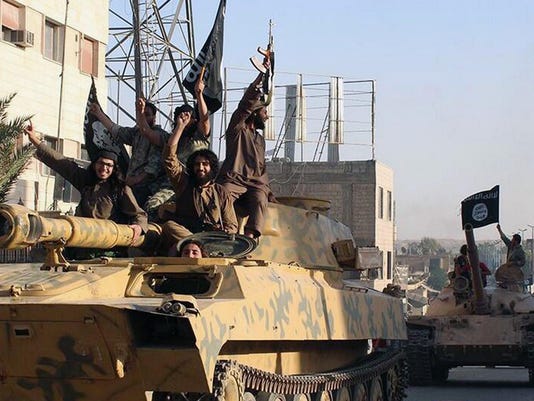 Fighters from the Islamic State ride tanks during a parade in Raqqa, Syria, in this undated image.(Photo: Raqqa Media Center via AP, file)

Flushing — Federal agents are hunting for a suburban Flint medical school graduate who has fled to Syria and is believed to be working as a doctor for Islamic State extremists, The Detroit News has learned.

Sealed federal court records involving 24-year-old Flushing native Mohamed Maleeh Masha reveal an international search stretching from the battlefields of war-torn Syria to downtown Flint. The records, emerging while the city copes with fallout from a water crisis, offer a rare peek inside a federal terror investigation that could yield insight into Islamic State recruiting methods.

The manhunt was revealed in a sealed search warrant that was briefly posted on the federal court online case database. The records indicate the FBI is looking for evidence Masha is supporting Islamic State groups, including the Islamic State of Iraq and Syria — known as ISIS.

The terror investigation is likely focused on determining if Masha is recruiting people in the Flint area and elsewhere to join ISIS, counterterrorism experts said.

“I imagine the FBI is trying to figure if he is a recruiter and having contacts with anyone back in Michigan,” said Seamus Hughes, deputy director of George Washington University’s Program on Extremism.

Until last year, Masha lived in an orange-brick, two-story colonial in a leafy subdivision in Flushing, eight miles northwest of downtown Flint. His driver’s license expires next month.

Masha’s mother and several siblings live there today. Weeds poked above the backyard deck during a recent visit and the swimming pool appeared damaged, the blue liner peeling and hanging like drapes.

A woman who answered a knock on the front door and identified herself as Masha’s mother declined comment.

The U.S. Attorney’s Office in Detroit and the FBI declined comment.

The investigation dates to at least Oct. 2, when U.S. Magistrate Judge Michael Hluchaniuk in Flint gave the FBI permission to execute at least one search warrant involving Masha.

Investigators specifically were hunting for evidence Masha was helping ISIS and the Islamic State of Iraq and the Levant — known as ISIL.

The records reveal a shadowy FBI investigation that appears to have been triggered by Masha’s disappearance in early 2015.

Masha is believed to have been among the first of two waves of medical school students and graduates to travel to Turkey before entering Syria, according to news reports.

The U.S. passport holder and about 10 other students from the University of Medical Sciences and Technology in Khartoum, Sudan, crossed into a section of Syria controlled by the Islamic State and were believed to be working in hospitals, according to a March 2015 report by the Guardian newspaper.

People with medical skills are valuable recruits and can help treat extremists wounded on the battlefield, experts said.

A British medical student believed to have been among Masha’s group that entered Syria in March 2015 appeared in an ISIS propaganda video last year.

Abdulmutallab grew up in a well-to-do banking family, attended elite schools and led a privileged life.

“What is significant about this case is the behavior of the individual — how he got connected to ISIS, where he traveled to,” said Jordan Tama, a terrorism and national security expert at American University. “That’s something the public doesn’t know a lot about.”

Masha appears to have more humble roots. He grew up in Flushing but attended high school in Denver, Colorado.

The pages of East High School’s yearbook show a pudgy-cheeked kid with spiky hair wearing a striped shirt. He belonged to the Future Business Leaders of America club.

He graduated in 2009. The yearbook index lists his senior photo as appearing on page 48.

He later attended the University of Medical Sciences and Technology in Khartoum, Sudan, and graduated in 2014, according to his Facebook page.

Masha’s family keeps a low profile in Flushing, neighbors said, recalling few interactions with the man’s relatives other than a quick wave.

If Masha is aiding Islamic State extremists, it is a relatively rare case of recruiting an American.

Since 2014, 88 people have been charged in the U.S. with ISIS-related crimes, and investigations target hundreds more, according to George Washington University statistics.

More than 250 Americans have tried or succeeded in joining ISIS in Syria or Iraq, Hughes said.

Masha fits the pattern of typical ISIS recruits. The recruits are overwhelmingly male; the average age is 26.

His Facebook profile photo is a picture of a golden sword and the words “Islam is the Religion of the Sword Not Pacifism.” Another photo shows an outline of the U.S., dollar signs and the words “Interest & Tyranny.”

Masha’s most recent public Facebook post was in December and included a photo with the word “Jihad.”

In June 2015, Masha posted a quote from Anwar al-Awlaki, a radical U.S.-born cleric who federal prosecutors said met with Abdulmutallab before the failed underwear bomb attack.

Al-Awlaki was killed in a 2011 drone strike in Yemen.

Masha faces an equally grim fate if he remains in Syria, experts said.

“The odds of the United States capturing him are pretty low,” Tama said. “In Syria, it’s not really about law enforcement. It’s a military campaign. There’s a significant chance he’ll end up getting killed.”