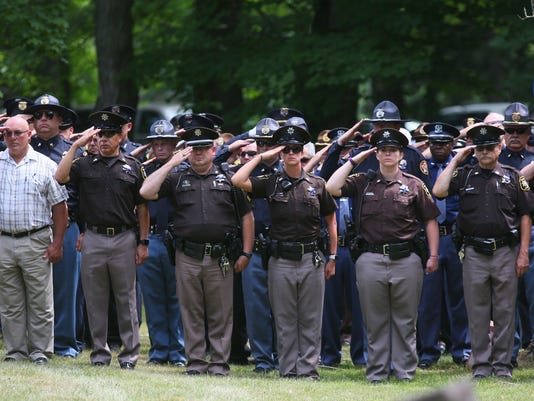 Benton Harbor — A bailiff who was fatally shot at a Michigan courthouse was laid to rest with full military honors Monday in southwestern Michigan, a week after he and a colleague were gunned down by a jail inmate during an escape attempt.

Officials added an overflow room to accommodate hundreds of people at Ron Kienzle’s funeral at the Mendel Center at Lake Michigan College. Bagpipers led the hearse during a final procession at Crystal Springs Cemetery.

Officers from across the county attended the funeral, and Berrien County judges wore their black robes. Sheriff Paul Bailey, who delivered the tragic news to the public a week ago, said he’s still hurting from losing two friends, Kienzle and fellow bailiff Joe Zangaro.

“Our hearts are still broken,” Bailey said. “They won’t heal for some time.”

Kienzle, 63, and Zangaro, 61, who both worked at the Berrien courthouse after long careers as police officers in the region, were killed by inmate Larry Gordon. Kienzle served in the U.S. Army.

“We’ve got people in the courthouse who are sad and traumatized,” Judge Gary Bruce said. “Nobody’s ever going to be the same, but we have to figure out how to go forward. How do we go from here? I don’t know the answer to it, but we’re going to do it.”

Gordon wrested a gun from a deputy while being transported between court and jail and fatally shot Kienzle and Zangaro before he was killed, Bailey said.