Diver jumps into ‘another world’ in Port Huron 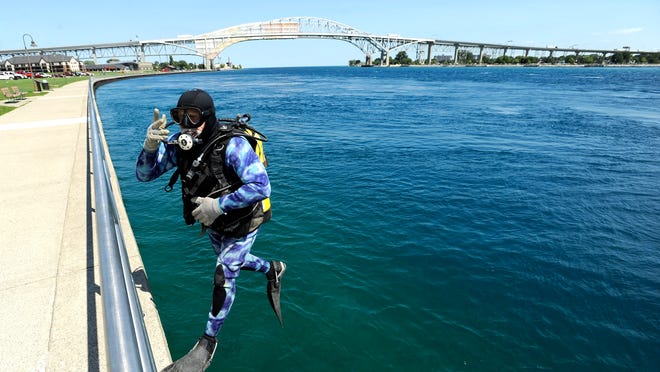 Port Huron  — Tim Brown never knows what he’s going to come up with each time he pulls on his diving gear and disappears beneath the surface of the St. Clair River.

The retired U.S. Navy veteran, who now dives for a hobby, has recovered all sorts of underwater treasures, from old jewelry to a human skull.

“The skull was of a man from one of the 1900 shipwrecks,” Brown said. “There are some interesting finds down here. Everything from a gold pocket watch to parts of an old railroad.”

The skull, discovered a few years ago, was turned over to the St. Clair County Medical Examiner’s Officer and its age was confirmed by the Cranbrook Institute of Science.

Most of the items the 67-year-old former Navy diver finds he keeps or donates to Cranbrook.

Brown goes under the surface five days a week much of the year exclusively in the St. Clair River, south of the Blue Water Bridge along the Thomas Edison Parkway, looking for fascinating finds.

“It can be a dangerous hobby, but when I jump in, I dive into another world,” said Brown, a Port Huron resident.

After serving in the Navy from 1967 to 1971, working on the outside of nuclear submarines, Brown worked in underwater demolition for three years. Now, he just dives for sport.

“It’s silent, and I’m able to see things the average person doesn’t get a chance to see, like different fish and wrecked ships,” he said.

One of the artifacts Brown discovered was a prehistoric “net sinker” made of Petoskey stones dating back to 1000 A.D. It was used by Native Americans to attach to the bottom of their vertical fishing nets to hold them steady.

“The unique thing about the entire area of Port Huron is that there is so much rich history,” said Michael Stafford, Cranbrook’s director. “It was an ideal place for fishing back during the Stone Age and all the way up until now. Tim’s passion for the area has led him to find many interesting artifacts.”

The St. Clair River is 39 miles in length and has a depth of 30-70 feet. In August 1900, a wooden schooner barge Fontana, on its way to Cleveland and carrying 2,600 tons of iron ore, collided with another ship and sank.

A month later, the schooner barge Martin, also carrying iron ore, was struck by another ship. Both ships were wrecked in the narrows at the head of the river, according to the U.S. Army Corps of Engineers.

A diving session for Brown lasts 35-40 minutes, depending on the size of the tank he is using and the water current.

“You have to be very careful when it comes to diving because the water can be very hazardous. When you get in there, the current controls you. You have to really be cautious,” Brown said. “You also have to look out for the freighters that pass by, but other than that, I love the thrill of it.”

While it’s not common to come across an ancient artifact, Stafford said, Cranbrook will examine any object at no cost.

“We encourage individuals like Tim, who are interested in history or happen to find rare artifacts, to come and have them identified,” he said. “It’s a good way to interact and get involved with learning about the community and the past.”

With Brown diving more than 260 days a year, he is still searching for a specific item.