M-STEP: Less than 50% of Mich. students proficient in math, science

M-STEP: Less than 50% of Mich. students proficient in math, science 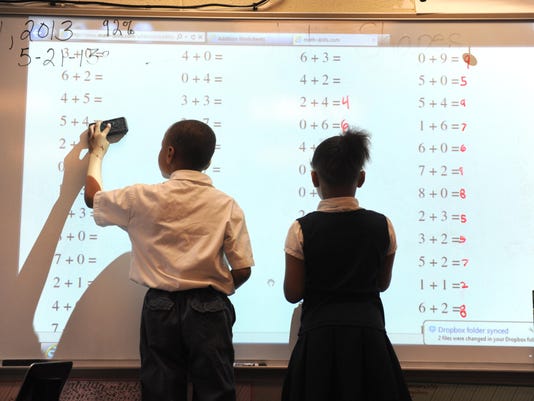 With the exception of fifth-grade English and 11th-grade English, less than half of Michigan’s students reached proficiency in core subjects on the state’s M-STEP standardized exam, according to results released Tuesday.(Photo: Max Ortiz, The Detroit News)Buy Photo

With the exception of fifth-grade English and 11th-grade English, less than half of Michigan’s students reached proficiency in core subjects on the state’s M-STEP standardized exam, according to results released Tuesday.

The statewide scores on the 2016 Michigan Student Test of Educational Progress, given for the second time last spring, show relatively little variation from the first version of the exam, administered in 2015.

In 2015, third-grade English was the only subject in which half of the test-takers statewide achieved at least 50 percent proficiency.

On this year’s test, nearly 70 percent of districts and charter schools in Wayne, Oakland, Macomb and Livingston counties failed to achieve proficiency rates of 50 percent or higher in third-grade English – the same as last year.

M-STEP results by district and building - The Detroit News

Statewide, the proficiency rate for third-graders in English fell from 50 percent last year to 46 percent on this year’s exam. The drop occurred in spite of Gov. Rick Snyder’s campaign to boost third-grade literacy.

The governor addressed the issue in his State of the State address last year and included about $28 million in the fiscal year 2016 budget to promote reading proficiency through more screening, instructional time and professional development for staff.

Students’ ability to read by third grade is considered a crucial building block for learning in subsequent grades and in other core subjects, including math and science.

Jan Ellis, a spokeswoman for the Michigan Department of Education, said state officials are studying the third-grade reading results to see how improvements can be made and encourage local educators to do the same.

“We’re going to be continuing to evaluate that data and see if there’s anything we can glean ... that we can turn into action,” she said. “There might be so many different reasons (scores) went up or down.”

Individual results can help schools determine which students need help and how closely their curricula were aligned to state standards, Ellis said.

“The individual school buildings need to provide that kind of information to parents because they can tell exactly which students went up or down,” she said. “It’s going to be helpful for schools to do their own diagnostics.”

Ellis said the results show gains in some subjects and grade levels, noting that science proficiency rates rose for all tested grades, from 12.4 percent to 14.7 percent in fourth grade, 22.7 percent to 23.9 percent in seventh grade and 29.4 percent to 33 percent in 11th grade.

Ellis said the second year of the M-STEP included some significant changes. For the first time, the SAT was administered to 11th graders as Michigan’s college entrance exam, instead of the ACT.

The SAT, which tests students’ college readiness in English and math, was used in place of the M-STEP exam for those subjects, saving 11th-graders eight hours of testing time, Ellis said.

Average scores at Michigan schools ranged from a low of 679 at Lighthouse Academy-North Campus, a Grand Rapids charter school, to 1334 at the International Academy, a public International Baccalaureate school with campuses in Bloomfield Hills, Troy and White Lake Township.

State education officials made other changes in the M-STEP from its first year to reduce testing time for other grades, saving students at least 21/2 hours, Ellis said. “This last test was substantially shorter for most students,” she said.

In addition, the exam was made computer-adaptive, meaning that questions got harder after each correct answer a student gave, and easier after each incorrect answer. “The test actually mimicked how the student was doing,” Ellis said.

The Michigan schools with the highest average scores:

The Michigan schools with the lowest average scores: