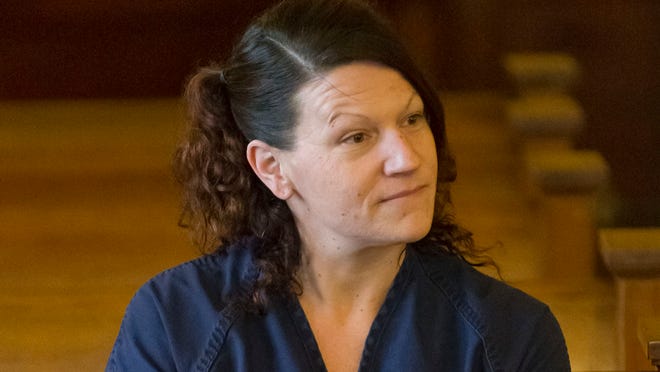 Caspian — When Kelly Cochran’s husband learned she had cheated on him, he asked how she would make up for it.

They hatched a scheme that lured the other man, Chris Regan, to their home in the Upper Peninsula and Jason Cochran shot him in the head, according to court records.

But Kelly never forgave her husband for the plot, authorities say.

Sixteen months later, while he was high on heroin, she climbed onto his lap and put her hands over his mouth and nose, suffocating him, according to court records.

And Kelly, 34, may be involved in other murders as well, the records show.

“Defendant has claimed responsibility for the death of other individuals which would, if true, make her a serial killer,” Iron County Prosecutor Melissa Powell wrote in a court motion.

Powell didn’t elaborate and declined to discuss her claim with a reporter.

Cochran was bound over for trial in Regan’s death Tuesday after 11 witnesses testified during a preliminary examination in Iron County District Court. An arraignment was scheduled for Oct. 11.

During the hearing, neighbors said they heard a late-night gunshot from the direction of Cochran’s home around the time of Regan’s disappearance in October 2014. They then heard power tools running in the middle of the night.

During a brief phone call last week from the Iron County Jail, where Cochran is being held on $5 million bond, she bemoaned being so far from her parents and siblings in Indiana.

She declined to discuss the criminal cases or the possibility she might be a serial killer.

“She needs to be in shackles and a stockade,” said Jason’s brother, Chet Cochran. “Let them throw rocks at her like they did to witches back in the good old days.”

The deaths have been the talk of tiny Caspian, an old mining town near the Wisconsin border where former lift towers hover over the 900 residents.

The chatter began with Regan’s disappearance in 2014, escalated with Cochran’s arrest and alleged confession in April of this year and toppled over a month later with Powell’s mention of possible other deaths.

Mayor Mark Stauber said the deaths have thrown the town for a loop.

“It just goes to show you: You never know about people,” he said. “Never leave your guard down.”

In May, Cochran was talking to a detective when she asked whether he was a good writer. She said she had a good tale to tell.

The story began in 2013 when she and her husband moved to Caspian from Merrillville, a northwestern Indiana city where they had grown up. They left behind a trail of debts, according to court records.

Kelly had gotten a job at a factory near Caspian that makes mining equipment. Jason had a landscaping business called Great American Dream Corp.

The couple, married for 13 years, had no kids, just two dogs: a Labrador retriever and a mixed Lab.

Their new neighbors described Kelly as outgoing and friendly while Jason was quiet.

“She did most of the talking,” said Todd Saylor, who sometimes played a dice game with the couple.

Kelly, who has a giant butterfly tattoo on her left shoulder, loved to roller skate and had briefly joined a roller derby team several years earlier.

She met Regan in 2014 while they worked at the Lake Shore Systems plant in neighboring Iron City, said Stauber.

Cochran and Regan became heavily involved, getting together four or five times a week, she told police. It wasn’t known how long they were seeing each other or how Jason Cochran learned about the relationship.

Kelly’s interviews by police were described in a probable cause affidavit filed last month in Lake County (Indiana) Superior Court. Besides Regan’s death in Michigan, she also is charged with Jason’s death in Indiana.

When Jason learned about the affair in October 2014, he told Kelly he was going to Regan’s apartment to kill him, she later told a police detective.

When the detective said that would have been a careless act, Kelly quickly agreed.

“Sure, it would have been sloppy. He (Jason) doesn’t think,” she told the detective.

So the Cochrans came up with another plan.

Kelly asked Regan, 53, to come to her home for sex, she told police. Waiting in the basement was Jason with a Marlin Model 60 rifle.

After Regan was shot in the back of the head, Kelly retrieved the cord to an electric hand saw, which Jason used to dismember Regan’s body.

Late that night, she followed Jason in her car as he dropped off Regan’s vehicle at a park-and-ride lot six miles from their home, she told police.

She then drove her husband to nearby woods, where he carried several garbage bags with Regan’s remains.

‘I evened the score’

Regan was reported missing two weeks later and suspicion eventually fell upon Kelly Cochran. When Regan’s car was found, police discovered a sticky note inside that contained directions to the Cochrans’ home.

Police and the FBI searched the home in March 2015 but didn’t find anything, said police.

That same month, the couple moved back to Merrillville, in Indiana.

Writing on Facebook, Kelly Cochran said they had been looking for a place to live in Tennessee for two months and needed to move as soon as possible.

“Please help if u can!” she wrote. “I need to relocate to middle tn within 2 weeks.”

She also used the social media site to sell things in anticipation of the move. Among the items were furniture, sundries and, for $15, a “Reservoir Dogs” collector’s doll.

On the night Regan was killed, Cochran considered killing her husband instead, she later told police.

She continued to think about killing Jason for 16 months.

She got her chance in February of this year when he said he wanted to get high, she told police. She was a regular drug user but he wasn’t.

She bought heroin and a syringe and helped him inject himself.

While she was suffocating her husband, he looked at her with a mix of confusion and fear.

She told police it didn’t take long to kill him — less than a minute.

After the funeral, Cochran lamented her loss.

“This is the hardest thing I will ever have to deal with,” she wrote on Facebook on Feb. 28. “Jason was my heart and my best friend.”

But she told police a different story.

She told an Indiana police detective she wouldn’t lose a minute of sleep over her husband’s death.

She said she never forgave him for killing Regan.

“He took the only good thing I had in my life,” she said in May. “I still hate him and, yes, it was revenge. I evened the score.”

At first, Jason Cochran, 37, appeared to have died from a heroin overdose.

But a coroner determined he had been strangled.

Jeremy Ogden, a detective with the Hobart (Indiana) Police Department, called Kelly Cochran in February of this year and the two began a running conversation that lasted for three months. They spoke for 70 hours spanning 40 conversations.

Cochran mostly wanted to talk about Regan, Ogden wrote in the affidavit.

On April 26, she left Indiana and, two days later, was arrested by the U.S. Marshal’s Service in Kentucky.

During an interview at the Graves County Jail in Mayfield, Kentucky, she told Ogden about the deaths of Regan and Jason Cochran, according to the affidavit.

“I did not choose this life. It chose me,” she said.

After Cochran was moved to the Iron County Jail in the Upper Peninsula, Michigan investigators wanted her to show them where Regan’s remains and the murder weapon were located.

She agreed to do so but first wanted to talk to Ogden, according to the affidavit.

During the May conversation, she fretted the evidence would help build a stronger case against her but Ogden said helping police was the right thing to do.

With Cochran’s help, police found parts of the rifle at her Caspian home and in the Caspian Pit, a popular fishing spot.

The police also found Regan’s remains in the woods, including a skull with an apparent bullet hole, said the affidavit. Nearby was a .22 caliber bullet and a pair of eyeglasses believed to belong to Regan.

During a last phone call with Ogden, Cochran said she wanted to talk about love. She didn’t know how to feel it so she studied how people in love responded to each other.