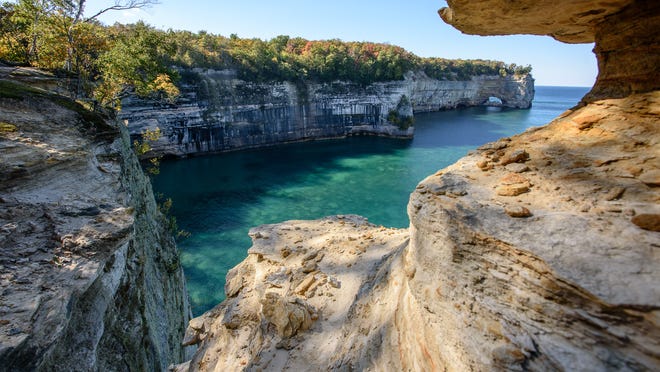 Pictured Rocks National Lakeshore in the Upper Peninsula practically begs to be photographed. The color-streaked cliffs, rock formations, sand dunes and waterfalls along Lake Superior near Munising attract more than a half-million visitors each year, most of them snapping away with their smartphones or cameras.

This year, Pictured Rocks is celebrating two anniversaries: Its 50th as the nation’s first designated lakeshore, and the 100th anniversary of the National Park Service. As part of those observances, the park service chose photographer Bryan Mitchell of Northville, whose images frequently appear in The Detroit News, as Pictured Rocks’ 2016 Artist in Residence.

Mitchell just spent 18 days there, staying in a park cabin and using his 28 years of professional experience to find a fresh viewpoint on the scenery. As part of the Artist in Residence program, he conducted interpretive programs at the park.

“I chose my residency to be in October, as there is no better time of the year to be in the north woods of Michigan,” Mitchell said. “The air is cooling, the bugs are gone, there are not as many people in the woods and of course the fabulous change of leaves into fall colors. I don’t think there is a better place in the world to enjoy this time than in northern Michigan.

“People who have never been to the park seem amazed that this spectacular landscape is in Michigan,” he said. “The tall cliffs hanging over Lake Superior are like nothing else in the state.”

Mitchell has been going on camping trips to the UP for most of his life, not so much for the photography but to be alone in the woods. “For me, nature photography is personal,” he said. “The goal is always to just be out there and explore.”

On this page he shares a sample of the photos he shot at Pictured Rocks. “This is what I saw and what makes this place special to me. I’m sure it’s the same reasons for many others,” Mitchell said. “Hopefully how I felt shows through a little bit as well.”