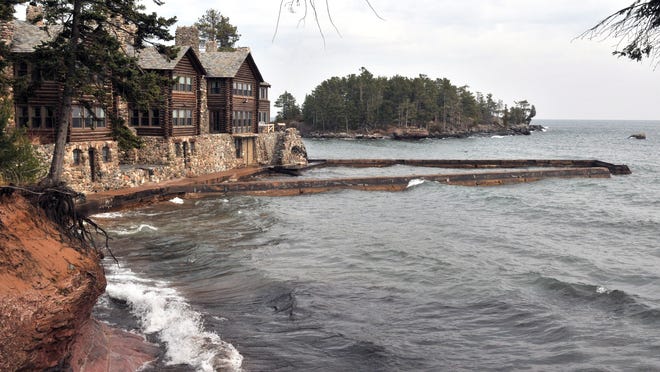 Marquette — The owners of the most expensive log cabin in Michigan has slashed the sales price of the home on the shore of Lake Superior.

Prospective buyers will pay less, but will also get less.

Originally listed for $40 million the price for Granot Loma has been cut in half, down to $19.5 million. The house originally was being sold with all 5,100 acres of timberland along the lake. Now, just 415 acres come with the house, including a mile of shoreline.

Buyers will also get the 26,000-square-foot log lodge and a farm consisting of 13 buildings — including a huge barn and two houses — a pool, apple orchard and wind turbine.

“Everything north of our main road is listed, including the farm,” said Karen McDonnell, fiancee of owner Tom Baldwin. “The offer includes all buildings including the lodge, the island and other structures. It’s spectacular property and a very comfortable and homey place.”

Granot Loma features a main lodge that features a 60-foot great room with a massive stone fireplace and 24-foot ceiling, a wine cellar, vault, marina, 3,000 gallon hot tub and a kitchen fashioned after the White House. The land it was built on features two trout streams, trails, an island, rock outcropping and more than three miles of Lake Superior shoreline.

“It became the most-viewed listing in the United States on Realtor.com,” Sullivan said. “After a year on the market, Granot Loma’s owner, Tom Baldwin, has decided to list the property himself at a reduced price and a smaller package.”

The Chicago financier bought the 93-year-old lodge 1987 for $4.2 million and spent the next 18 months spending another $4 million to restore it. Interior work and decorations took another two years.

It was listed on the National Register of Historic Places in 1991.

“We have some prospective buyers,” Sullivan said. “At this time it has not been sold and Mr. Baldwin is basically listing the lodge and acreage around it himself.”

Built from 1919-23 by financier Louis G. Kaufman, Granot Loma is situated on a peninsula jutting into Lake Superior north of the city of Marquette. The lodge was built in the tradition of the Great Adirondack lodges and may be the largest log cabin lodge in the nation, if not the world.

The farm was developed to provide food for the owners and workers and is about a half mile from the lodge. The original cost of construction was $5 million.

While Granot Loma is the most expensive log cabin in Michigan, another home on the shores of Lake Michigan has been listed for $40 million after the death of owner Aubrey McClendon, who made a fortune in hydraulic fracking before dying in a car accident in March in Oklahoma.