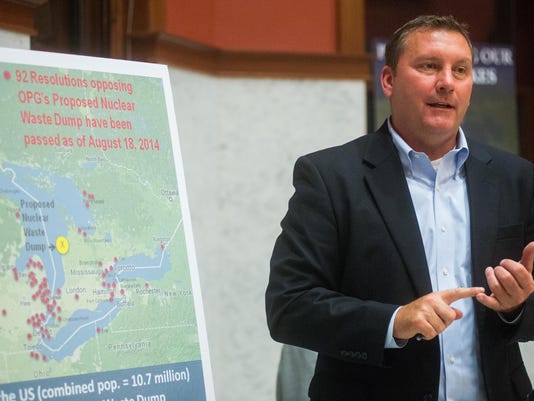 The province’s minister of environment and climate change called for OPG to investigate alternate sites for the controversial project that has been opposed by many Michigan lawmakers, originally sited near Kincardine. For roughly a dozen years, the company has pursued approval to bury low-level to-mid-level radioactive wastes deep underground.

But in November 2015, the minister’s office announced it would delay a decision on granting the project final approval. And in February, federal Environment Minister Catherine McKenna called on OPG to provide additional data, including research on alternate locations.

On Tuesday, OPG submitted its response to the information requests.

“The studies show that relocating the (deep geologic repository) to an alternate location would result in increased environmental effects and significant incremental costs, with no assurance of increased safety to workers and the public, or protection of the environment,” OPG said in a Tuesday statement.

The company looked at a site to the south where the storage facility would be built into sedimentary rock, as well as a site to the north featuring crystalline rock, according to OPG.

“Water is life. No matter what process is followed, burying radioactive nuclear waste beside the drinking water of 40 million people will always be a bad idea,” said Beverly Fernandez, spokeswoman for the group Stop The Great Lakes Nuclear Dump.

The Canadian Environmental Assessment Agency is expected to review OPG’s latest submission and take public comments on it.

If completed, OPG’s deep geologic repository would sit 2,230 feet below the surface and less than a mile from the shore. Company officials have argued that the makeup of the rock at that depth is perfect for safely storing wastes for “hundreds” of years.

“Based on the findings, OPG maintains that a (deep geologic repository) is the right answer for its low and intermediate-level waste, and that the current proposed (Kincardine) nuclear site is the right location,” OPG stated in its release.

While it has garnered support from residents in and around Kincardine and Bruce County, where OPG operates a nuclear plant, environmental groups and elected officials on both sides of the border have expressed concern about the repository’s potential to rupture and contaminate Lake Huron.

“We’re simply asking the Canadian government ... to consider a site that is not so close to the world’s greatest freshwater resource ... ,” Kildee said.