A lawsuit charges school with protecting Tim Bell after he had sex with an underage cheerleader, filmed the encounter

Benton Harbor — When a motley high school football team went from winless to undefeated in two years, it shook this sleepy town awake.

The once-empty bleachers filled with fans. Merchants donated materials to the struggling program. ESPN aired a feature on the players. “Good Morning America” sent them last year to Disney World.

If this were Hollywood, the story of the Benton Harbor High School Tigers would have ended with the 2016 triumphant trip to the Sunshine State. But this is Benton Harbor, where life tends to be more stormy.

In January, a federal lawsuit charged the school protected quarterback Tim Bell after he had sex with an underage cheerleader, used his phone to film the encounter and showed it to teammates.

The suit, filed by the cheerleader’s mom, Sharee Brooks, said the school district failed to investigate the incident and didn’t suspend Bell until 11 weeks after learning about it.

Bell pleaded guilty to assault with intent to commit sexual penetration and was sentenced to a year in the Berrien County Jail. At the time of the 2015 incident, he was 16 and the cheerleader 15. In Michigan, the age of consent is 16.

Fallout from the criminal and now civil case is threatening to tug the community apart just as the team’s success was bringing it together, according to interviews, police reports, court documents and trial testimony.

Some residents argue the punishment of Bell went too far. They said he was an otherwise good kid with a clean record whose life shouldn’t be upended by a youthful mistake.

“What happened to Tim Bell never should have happened,” said Ruth Harvey, the school’s longtime sports equipment manager. “Everybody wants to look at the young man but not the young woman. To me, Tim Bell got a raw deal.”

The ire of some residents was directed at Brooks for going to the police. With the filing of the lawsuit, some now accuse her of trying to cash in on the imbroglio.

Other residents said Bell deserved to be punished.

“With any jocks, there’s too much favoritism,” resident Pat Flaherty said. “They get a free pass because they can throw a football.”

One of the first things a visitor notices about this southwestern Michigan city is the emptiness: vacant lots, vacant homes, vacant stores, even a vacant three-story brick church. The city was under state emergency management for four years because of financial problems, ending in 2014.

Nearly half of the 10,000 residents live in poverty and more than a quarter are unemployed, according to the census. Most children are raised by single parents. 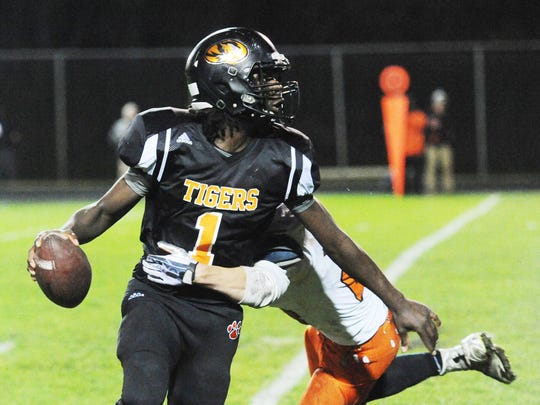 Benton Harbor quarterback Tim Bell was sentenced to jail after having sex with a minor and filming the encounter. (Photo: Don Campbell / The Herald-Palladiium)

When the high school football team made the playoffs for the first time in history, it filled the town’s empty spaces with a little joy.

“That’s the story of the century,” said Harold Hampton, a school lunchroom worker. “It’s like ‘Remember the Titans.’ It makes you want to believe again.”

Mayor Marcus Muhammad echoed Hampton’s sentiment, but neither wanted to discuss the lawsuit. Muhammad said he shouldn’t comment because it is an ongoing legal matter.

After the end of the magical football season in 2015, Bell and the cheerleader were at the high school during a basketball tournament over the Christmas break, according to a Benton Harbor police report. He was a junior and she was a freshman.

After flirting in a hallway, they walked up to the second floor.

“Why are we upstairs?” she asked, according to the police report.

“Nothing you don’t want to do,” he said.

They went into a boys’ restroom and Bell, while receiving oral sex, reached for his phone but dropped it before scooping it up and filming the encounter, he told police.

When the cheerleader realized she was being filmed, she wanted to stop, she later told a school social worker, according to the police report.

The cheerleader told police she tried to stop but Bell forced her to continue. But she later said during a court hearing he hadn’t forced her.

When the encounter ended, the cheerleader told Bell not to tell anyone about the incident, Bell said. They returned downstairs from different directions.

Bell, who also played on the basketball team, joined his teammates watching a game in the gym and immediately showed one the video, he told police. Later, during a team meal in the cafeteria, he showed it to three others.

In a small town, it didn’t take long for knowledge about the video to spread.

After school resumed in early January, the cheerleader’s coach talked to the girl about the incident after hearing several cheerleaders discuss it during practice, said the police report. The coach, Kenisha Nichols, told the cheerleader they should call police, but the girl said no.

But the matter was out of her hands.

A school security guard who heard about the tape called the cheerleader’s dad, Carleton Brooks, who then called his ex-wife, Sharee Brooks, on Jan. 7, according to the lawsuit.

Sharee Brooks went to the school the next day, handed in her daughter’s cheerleader uniform and reported the incident to police. At the police station, Brooks and her daughter were crying and shaking, according to the police report.

When Bell’s friends learned the cheerleader had gone to the police, they badgered her at school, saying she was a willing participant in the encounter, the lawsuit said. One of the friends confronted her in front of her band class and teacher in March.

“Why are you doing this?” he asked, according to the lawsuit. “You’re ruining his life.”

The cheerleader quit the band and stopped going to school events, according to the lawsuit. She began staying home from school and, when she was in class, she had trouble concentrating. Her grade-point average tumbled from 3.7 to 2.5.

She was hospitalized for three days in February after trying to commit suicide, she said in a victim impact statement, according to court records.

Most of the lawsuit is focused on the way students treated the cheerleader after the sexual encounter.

Brooks discussed the treatment several times with Principal Rodger Tripplett by phone, email and in person, according to the legal claim. Tripplett encouraged her to continue reporting the incidents.

But the harassment never stopped, said the lawsuit. Brooks pulled her daughter out of the school on April 28.

The vitriol spilled from the school into the community.

After Brooks learned about the video Jan. 7, she received texts later that day from Bell’s mother, Nicole, beseeching her not to go to the police, the lawsuit said.

After Brooks went to the police the next day, she was harassed by texts and Facebook messages by Nicole Bell and her friends, according to the lawsuit.

A review of Nicole Bell’s Facebook page by The Detroit News shows a string of pointed posts from April to earlier this month that accuse Brooks of trying to profit financially from the lawsuit.

“Don’t think for a second I have forgotten about you lies and deceit,” a March 6 post reads. “Sit on that high horse for as long as you can because, in due time, I’m going to knock you right off!!!”

Bell apparently warned Brooks they would eventually run into each other.

“My Gun has always been loaded, with information that is,” a post from September reads. “And now it’s about that time I start shooting!!! So put on your bullet proof vest, and buckle the (blank) up!!!”

Brooks, who owns a beauty shop in town, said she and her family couldn’t go out in public without people pointing at them and whispering, according to the lawsuit.

She moved her family, which includes a 10-year-old son, to an apartment an hour away from Benton Harbor, said the suit. They left a house Brooks had bought in 2015.

In a plea deal, Bell pleaded guilty to the criminal sexual conduct charge in return for the dropping of three other counts.

Before his sentencing in August, several members of the community wrote letters to the judge asking for leniency. They talked about his exploits as an athlete and the fact he had never been in trouble before.

Even the cheerleader, in her victim impact statement, said she hoped he wouldn’t be sent to jail.

But Berrien County Trial Judge Dennis Wiley told Bell what he did with the cheerleader was despicable and wiped out the good he had done at school.

“You have fallen prey to this phenomenon in our society that star athletes don’t have to play by the same rules as everybody else,” said Wiley, according to a transcript of the hearing. “It’s all about winning.”

Because of Bell’s age and clean record, Wiley said he would limit the sentence to one year. The teen is scheduled to be released in June.

Meanwhile, residents continue to argue about the case.

Pati Heinz, a local civic activist, said Bell made a mistake but shouldn’t have been forced to miss a year of school because of it.

“I’m not saying he didn’t do wrong,” she said. “I’m saying the price he’s paying is wrong.”

But it’s the story of Benton Harbor, Heinz said. As soon as the community feels good about something, it gets snatched away.

“Every time there’s a glimmer of hope, it’s pulled away,” she said. “Every time we peek our head out of the hole, someone kicks it down.”