Mio — Nestled among the state’s young jack pines is a tiny migratory bird so rare, birding enthusiasts each spring are drawn into North Michigan’s forests to welcome it back. 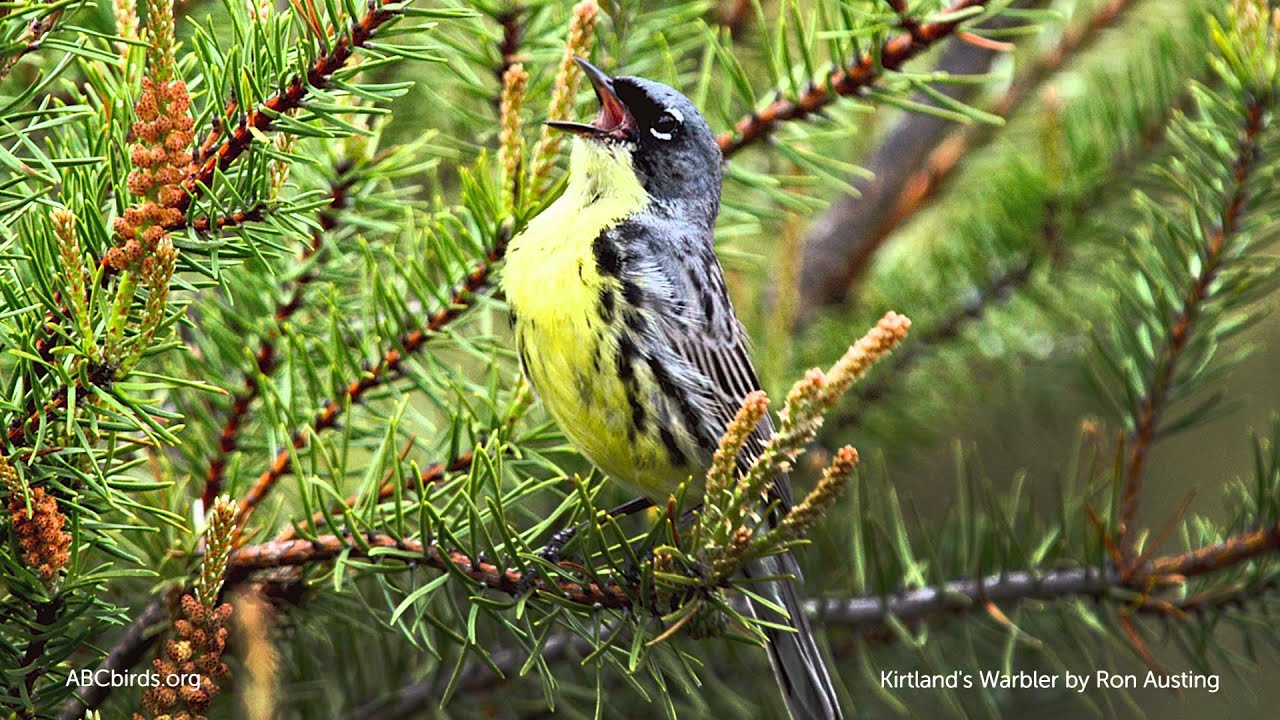 The Kirtland’s Warbler, the rarest of the wood warbler family, nests in large numbers in the Mitten State, providing an abundance of watching sites to spot one of the elusive songbirds.

From mid-May through June, the bird seeks out Michigan’s established plantations of young jack pines for their branches because they grow close to the ground, protecting the birds from predators and bad weather by concealing the warblers’ nests.

On a morning earlier this month, a group of birders from the Wichita (Kansas) Audubon Society traveled on a free tour with a U.S. Forest Service biologist to a plantation east of Mio in the Huron-Manistee National Forest.

“It was worth the trip,” said Rod Wedel, of Wichita, Kansas. “Seeing two male Kirtland’s Warblers was a thrill.”

The group had come north from the Magee Marsh in Ohio where they photographed other kinds of warblers. The marsh is considered to be the best place in America to photograph and view songbirds and many types of warblers but not the Kirtland’s.

“Every birder in the country comes to see a Kirtland’s Warbler,” said tour director Kevin Groeneweg of Wichita, Kansas. “We are very happy with our success.”

Harry Gregory, also of Wichita, sought out the Kirtland’s Warbler on the Northern Michigan stop as part of their six-day trip.

“This was my lifer,” Gregory said. “I have hoped to add this special bird to my list of spotted birds, and now I have!”

The term “lifer” refers to when a birder spots and verifies a new species to them in its “natural and wild habitat” and can add it to his or her official Audubon log book.

The Mio Rangers District Headquarters in Mio offers tours until Wednesday in the Huron-Manistee National Forest. Also, tours from Hartwick Pines State Park are offered once a day during the week and twice daily on weekends, through the Fourth of July. A Recreation Pass is needed for park entrance.

The Kirtland’s Warbler is a small songbird, an adult male being about six inches tall. The males have a bluish gray back with a bright yellow throat, belly and chest, and two white wingbars. Only the males sing, both in establishing their nesting area and to attract females. The females are a dull, bluish gray with a dull-white chest for camouflage while nesting. The birds dine on insects, blueberries and larvae.

The birds are shy but can be found by listening for their vocal singing.

The tiny warbler was an unknown species to bird enthusiasts until its discovery in 1851 by Jared Kirtland of Cleveland, Ohio, at his farm. Its nesting area in northern lower Michigan was discovered more than 50 years later. By 1967, the U.S. Fish and Wildlife Service listed the warbler as an endangered species, giving it special protection when the Endangered Species Act of 1973 was adopted.

The warblers also have “nest fidelity,” according to park interpreter Craig Kasmer of the Michigan Department of Natural Resources at Hartwick Pines State Park, north of Grayling. Warblers born in the area return to nest and have their own offspring each year. The health of the population has been proven by the increasing numbers of birds that return to areas maintained as optimal warbler environments.

A consortium of the DNR, U.S. Fish and Wildlife Service, the Manistee-Huron National Forest and the Michigan Audubon Society have worked to rotate jack pine plantations in the state.

In the past, forest fires would burn over large areas of land and their intense heat would release jack pine seeds from the cones left by the trees consumed by fire. Natural reproduction of warblers over the years was impacted by people as they moved north and occupied the land and fires became less frequent.

Numbers of nesting birds fell to around 500 pairs in 1971. With improved management and environment, the numbers increased to 2,500 nesting pairs by 2015, according to Kim Piccolo, wildlife biologist with the U.S. Forest Service.

Biologists and naturalists plant thousands of acres for jack pine seedlings each year, developing high-density plantations that provide a quality breeding habitat, according to Scott Hicks, field supervisor for the U.S. Forest and Wildlife Service. Deer, spruce grouse, and other song birds live in the plantations. Older pines are harvested for the economic value of the wood. As the newly planted trees grow, the warblers move in and the cycle begins all over again.

The birds prefer jack pine stands of over 80 acres. Habitat management is a major part of maintaining a targeted nesting population of 1,000 pairs of Kirtland’s Warblers.

The birds winter in the Bahamas and head north each spring. They are one of more than 200 neo-tropical migratory species that winter in the tropics and nest in North America, according to the Michigan Department of Natural Resources. The birds nest in large numbers in Michigan but recently have been discovered in northern Wisconsin and Ontario.

Dawn Umphrey, manager of the Ramada Inn in Grayling, has seen a positive impact from the birds’ popularity over the last few years.

“I’ve seen numbers increase yearly by several new visitors each day during May, which is a down month for business. I’ve even put ‘Welcome back, Kirtland’s Warblers’ on our sign.”

Umphrey has hosted birders from Japan, Germany and the United Kingdom, and more closely, New York and Pennsylvania along with many other states.

A Kirtland’s Warbler festival in Roscommon in early June also brings birders to Northern Michigan to the area. This year’s warbler weekend is being held June 2-3.

“It’s definitely a bonus to have the extra visitors,” said Traci Cook, executive director of the Grayling Regional Chamber of Commerce. “All of our area businesses see increased numbers as word spreads about our birds.”