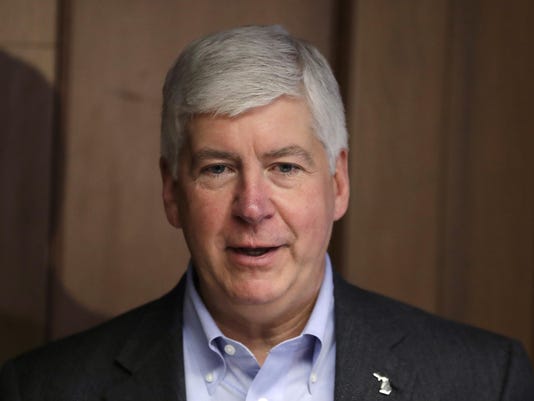 Gov. Rick Snyder signed a bill where Individuals convicted of mutilating female genitalia or transporting girls to other states for a procedure could face up to 15 years in prison.(Photo: Carlos Osorio / AP file photo)

Lansing – Individuals convicted of mutilating female genitalia or transporting girls to other states for a procedure could face up to 15 years in prison under new laws signed Tuesday by Gov. Rick Snyder.

The bipartisan 12-bill package builds on federal law, which makes the practice illegal and punishable by up to five years in prison. The tougher new Michigan laws also extend the statute of limitations for victims and allow the state to permanently revoke the health care license of doctors or other medical professionals who perform the procedure.

“Those who commit these horrendous crimes should be held accountable for their actions, and these bills stiffen the penalties for offenders while providing additional support to victims,” Snyder said in a statement announcing he signed the bills. “This legislation is an important step toward eliminating this despicable practice in Michigan while empowering victims to find healing and justice.”

The state Legislature sent the governor the bills last month amid a first-of-its kind federal case in Michigan. Prosecutors say as many as 100 girls may have had their genitalia mutilated during a 12-year conspiracy involving three Metro Detroit doctors. The trio was charged in May in a case involving two 7-year-old girls from Minnesota.

The state laws – which would apply only to future cases – make it a 15-year felony to knowingly circumcise, cut or stitch up the genitalia of a female under the age of 18. Transporting a person to another state for the procedure could also land a person in prison for up to 15 years.

Female genital mutilation is a traditional practice in some cultures, but the bills make clear that a person could not cite custom, ritual or parental consent as a legal defense.

An estimated 513,000 women and girls in the United States are at risk or have already experienced female genital mutilation, according to the Centers for Disease Control and Prevention. Michigan is considered a hot spot, and especially Metro Detroit, because of large immigrant populations from other countries where the practice is more prevalent.

The state laws will allow victims to seek criminal indictments up to 10 years after the crime or until they are 21 years old, whichever is later — extending the state’s six-year statute of limitation for many crimes. Victims could sue in civil court until they turned 28.

One of the laws will also require the Michigan Department of Health and Human Services to develop an educational outreach program informing the public of the emotional trauma of female genital mutilation and the new criminal penalties.