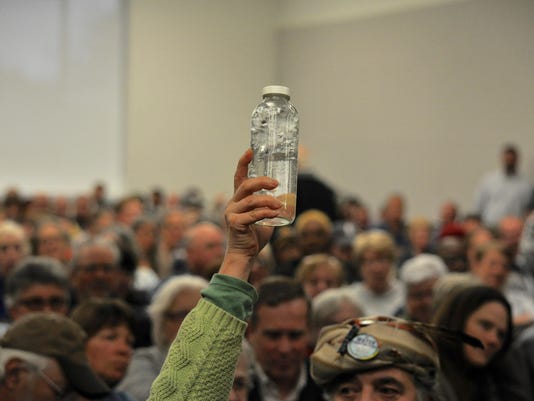 At a Department of Environmental Quality hearing in April on a request by Nestle to draw more water from a well in Evart raised their bottles of water in opposition to someone who was speaking in support of the request.(Photo: Chris Lamphere / Special to Detroit News)

Lansing — Nestle Waters North America will go ahead with its appeal of a township decision barring construction of a new pumping station to withdraw more underground water from a northern Michigan community.

Nestle had originally agreed to delay its appeal for a booster pump until the Department of Environmental Quality decided on the company’s request to withdraw extra water from Osceola County. But the company has withdrawn its stay with the circuit court in Reed City on that appeal.

The company wants to build an extra pump to boost water pressure, making it easier to transport extra water from Spring Hill Camp in Osceola County. But the Osceola Township Planning Commission rejected Nestle’s proposal for the pump in April.

Nestle says it needs the pump to extract additional water. It’s a request related to a separate one with the Michigan Department of Environmental Quality to increase its withdrawal from 250 to 400 gallons per minute from an underground aquifer at the White Pine Springs well in Osceola County.

Arlene Anderson-Vincent, the company’s natural resource manager, said in a statement that the 12-by-22-foot building that would house the extra pump meets all local zoning standards.

“We believed that a motion to stay the appeal was in the interest of both (Nestle Waters North America) and Osceola Township,” Anderson-Vincent said. “However, since Osceola Township did not agree and declined our invitation to support the motion, we decided to withdraw our request for the stay.

“This booster station would have the least impact to the local community and environment out of all our options,” she continued.

Nestle did not disclose a date for when it plans to file the appeal.

The company had looked into other options for transporting extra water, such as tanker trucks or a new pipeline and decided that the extra pumping station would have a lesser impact on the environment.

But the DEQ has received tens of thousands of comments from people opposed to the company’s water withdrawal request. Environmentalists argue it could hurt northern Michigan wetlands and are critical of Nestle for selling Michigan’s water in other states.

Critics also decry the cost to the company for pulling more water from the ground: $5,000 for a permit application and an annual $200 fee for filing related annual paperwork, according to the DEQ.

Nestle would withdraw about 210 million gallons a year if its permit were granted.

Company officials have said the request would not harm the environment.