Is hate on rise? Metro Detroiters weigh in

Is racial animosity on the rise in America or Michigan? The answers vary

Is hate on rise? Metro Detroiters weigh in 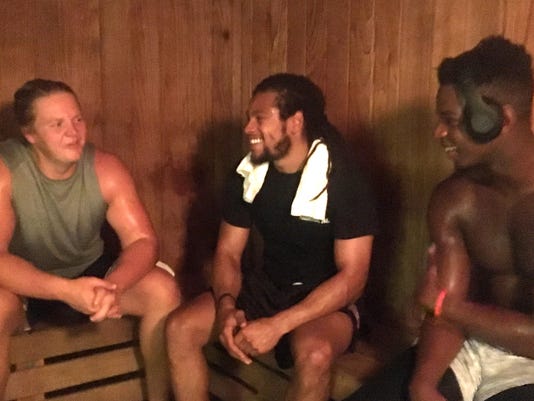 The televisions at LA Fitness in Royal Oak were tuned to cable news coverage of the neo-Nazi rally in Charlottesville, Virginia, but the locker room conversation between two men — one black, one white — focused on baseball.

Gary Richards, 76, of Hazel Park, and Al Smiley, 59, of Detroit agreed on two things: Tigers manager Brad Ausmus isn’t getting the job done, and most people of different races are getting along, despite concerns that hate group activity could be growing.

“Of course, there’s racism,” said Smiley, who is black. “And it’s on all sides: black, white, Hispanic. But I don’t think it’s as bad as they make it seem on TV. I think most people are getting along.”

Richards, who is white, said he sees small daily gestures that indicate there isn’t as big a racial divide as some believe.

“I hold the door open for everybody, and they hold it for me,” Richards said. “Sometimes someone will let the door close in my face, but it doesn’t happen very often. Usually, people will smile and say hello.”

Is racial animosity on the rise in America or Michigan? The answers vary.

Law enforcement officials say it’s difficult to quantify, since reporting hate crimes isn’t mandatory, and not all reports of bigotry turn out to be true. Civil rights groups say they’ve seen a recent spike in complaints about hateful speech and activity.

The Southern Poverty Law Center lists 28 Michigan organizations on its hate group map, down from 35 in 2010. Nationwide, the number of organizations identified as hate groups has dropped from 1,002 in 2010 to 917.

Some groups on the SPLC’s list insist they don’t promote hatred.

“They’re creating fake hate,” said Dick Manasseri, spokesman for New Baltimore-based Secure Michigan, which is on the SPLC list. “We’re not anti-Muslim; we’re anti-Sharia. There’s a mentality to want to see hatred everywhere. I call it the hate industry, and (the SPLC) profits from it.”

Nardone called the claim “both inaccurate and irresponsible. An individual in an apartment with a copy machine does not accurately represent that title.” He added police are monitoring “the person responsible for spewing hatred in our community through KKK fliers.”

The SPLC also listed a Klan group in Battle Creek, although police Chief Jim Blocker said he’s unaware of any KKK activity there.

“I’ve been here 22 years and this is the first I’ve ever heard of it,” Blocker said.

Some white nationalists at the Charlottesville rally were using the Detroit Red Wings and Detroit Lions logos. Both teams denounced the use.

How to count hate?

On Friday, police were called to an Ann Arbor skate park, where someone spray-painted swastikas.

Vicki Levengood, a spokeswoman for the Michigan Department of Civil Rights, said there was an increase in reported hate incidents the week after Donald Trump was elected president last November, but cautioned not to read too much into that.

“There was a definite spike, and we’ve seen a little bit of a spike in the past week, but it’s hard for us to provide any figures that are going to mean anything in any context,” Levengood said.

“When we looked at numbers of instances we were monitoring after the election, it did increase exponentially,” Levengood said. “But I can’t definitively say it was an X-percent increase, and over-reliance on those numbers as meaning something would be a mistake.”

David P. Gelios, special agent in charge of the Detroit FBI office, agreed it’s difficult to quantify how many hate crimes are committed because some police departments don’t report them.

“I think it’s fair to say every time we see one of these national events like we saw in Charlottesville, there seems to be an increased sensitivity, and a spike in reports of alleged hate crime and hate conduct — and there’s a distinction between the two,” he said.

“Even before Charlottesville, we got reports from Kalkaska that (village manager Jeff Sieting) was suggesting violence against Muslims,” Gelios said. “That doesn’t count as a crime, even though in my assessment it’s hate speech, and distasteful.”

Sieting has shared Facebook posts criticizing Islam and calling for the killing of “every last Muslim.” One post he shared said of Muslims: “There is simply no place for them in our world.” Sieting has refused to apologize, while civil rights groups have denounced his Facebook activity.

Is there a Trump link?

The number of reported anti-Semitic incidents has skyrocketed in the past two years, said Heidi Budaj, Michigan regional director of the Anti-Defamation League.

“Thankfully, we often see neighbors of diverse backgrounds getting along together very well,” she said. “I don’t want to imply that the majority of people are harboring hatred. But the fact is, we track this, and I can tell you hate incidents are way up.”

Budaj insisted the election of Trump isn’t solely to blame for the increase. “There are people who will say it’s all because of Trump and others who say it has nothing to do with Trump,” she said. “The truth is, we were already seeing an uptick in incidents well before the election got underway in earnest.

“But I do believe there’s an element of the white supremacist community who feel empowered by Trump’s presidency, although I don’t attribute that to overt anti-Semitism by the president,” Budaj said. “We at the ADL find no evidence that he’s anti-Semitic, but I believe some of his rhetoric against immigrants has empowered hate groups.”

The ADL has also criticized Nation of Islam leader Louis Farrakhan for his remarks about whites, the LGBT community and Jews, whom he has repeatedly called “satanic.” When he spoke at Joe Louis Arena in Detroit in February, Farrakhan said of Jews: “I’m here to announce the end of your time.”

T.K. Kubuorono, a 24-year-old Royal Oak resident who was born in Zimbabwe, believes only a small but vocal minority of bigots are causing problems.

“It’s naive to put every white person or black person into one group based on a minority of people who do hateful things,” said Kubuorono, who moved to the United States when he was 6 years old.

Kubuorono, who is black, sat in the LA Fitness dry heat room Thursday with roommates and business partners Lamont Howard, 24, who also is black, and David Roden, 24, who is white.

The three men, who own travel agencies Wotabu and Collegiate Travel Co., sweated after their workouts and discussed getting tickets to a Tigers game. When asked about race relations in America, they insisted things aren’t as bad as they seem.

“I believe the media wants ratings, so they only look at the smallest percent on both sides, the alt-right or the alt-left, and they ignore the majority of people in the middle,” Roden said. “So you’re left with the impression that everyone is a racist, when it’s not the case.”

“I don’t care who you are, or where you’re from — every human being wants health, wealth, love and happiness,” Roden said.