It’s the next great threat to Michigan’s hardwoods.

Only up to 1 1/2 inches in length, the Asian longhorned beetle is a big deal.

The shiny black insect with white blotches spends much of its life eating through hardwoods. It loves maples best but will settle for birch, elm, willow, buckeye or a horse chestnut, making it a dangerous species for areas with trees, and that’s 53 percent of Michigan. They’re not here yet, but they soon could be.

Forestry experts and others are closely watching the advance of the exotic pest found in Ohio, according to John Bedford, pest response program specialist with the Michigan Department of Agriculture and Rural Development.

“This beetle cannot be allowed to enter Michigan,” he said. “The Asian longhorned beetle is our poster child of invasive.”

The six-legged beetle was discovered in 1996 in the United States after likely being transported from Asia in wood-packing materials. Besides Ohio, it’s been found in Massachusetts, New York, New Jersey, Illinois and Toronto. Bedford said the beetle is presently confined to a 62-square-mile area east of Cincinnati in Tate Township. It has damaged more than 97,000 trees in Ohio alone.

According to the Michigan Department of Natural Resources, the adults are active in late summer to early fall when females chew depressions in tree trunks and branches to lay eggs. When larvae hatch, they burrow deep into the tree, creating chambers. The following summer, adult beetles emerge from trees by boring round holes. Wood shavings can sometimes be seen near the holes in an infested tree’s bark. The tree drops branches and dies 10-15 years later.

Bedford notes the beetle does not move long distances on its own, but firewood transportation provides an opportunity for it to spread. And the way to limit the spread of the beetle is to destroy infested trees as “there is no good treatment to eradicate this beetle.”

“Stock and plantings are under quarantine, but if someone broke that, we’d have a major problem as the beetle attacks hardwood forests, including all species of maple trees,” he said. “It could do some serious damage to Michigan.”

Michigan is on the lookout for the beetle and officials from federal to local governments will act upon its presence by surveying and removing trees. Park rangers in Michigan are surveying incoming vehicles carrying wood, while biologists set pest traps and conduct aerial surveys in search of damage.

“There will be a rapid multi-agency response to any reports,” Bedford said.

“Fortunately, we have a window of opportunity: winter,” she said. “The cold slows the beetle, and we can remove the infected trees and rid the area of the pest.”

Michigan’s 19.3 million acres of forest already are under attack by a variety of invasive insects, and their damage affects the state’s forest industry and recreation. The state park system, which includes more than 100 parks and recreation areas covering 285,000 acres, has lost an estimated 500,000 trees since 2009, according to state environmental officials. 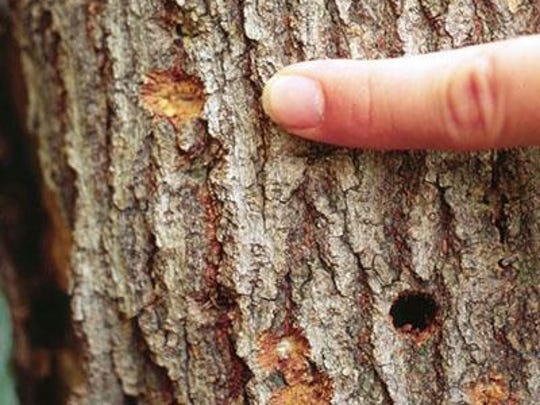 The U.S. Forest Service attributes 80 percent of invasive species impacting the state’s forests to migration from identified sources. Invasive insects enter the state in several ways, including infested wood-packing materials, firewood moved from location to location, or through nursery stock, according to the DNR. All parks offer for sale kiln-dried firewood from recognized vendors for use in the parks to combat the movement of invasive species.

“We have several insects or disease that can do serious damage to this resource,” said Scott Robbins, director of the sustainable forestry initiative and forest policy for the Michigan Forest Products Council. This damage impacts Michigan’s forest industry, which is valued at $20.3 billion of economic activity each year.

Among the most destructive species is the emerald ash borer. It was discovered in southeastern Michigan in 2002 and has since killed an estimated 30 million ash trees, Bedford said.

“The borer is found in all but three Michigan counties, as well as 25 states and two Canadian provinces,” he said.

A quarantine is in place, but the insect has ravaged the state. Bug-resistant trees and insecticides will help re-establish the species over time, according to the DNR, U.S. Department of Agriculture, Michigan Tech and Michigan State universities.

Beech bark disease also has devastated beech trees in the eastern Upper Peninsula and northern Lower Peninsula. First found in North America in 1890, the disease was discovered in 2000 at the Ludington State Park and the Bass Lake State Forest Campground near McMillan, according to the U.S. Fish and Wildlife Service. The disease has since spread widely throughout Michigan.

Triggered by a white scale insect that feeds on sap under the tree’s bark, a fungus called nectria invades tree and inhibits the flow of sap. Michigan has 7 million acres of beech-containing forests.

Another worrisome invasive disease is oak wilt, a fungal pathogen found in 46 of Michigan’s 83 counties. The fungus moves through sap-feeding beetles and has hit state parks especially hard, spread by carving initials in the trunk of oak trees, pruning branches, or storm damage during summer months.

Forest industry and environment expects hope the Asian longhorned beetle doesn’t join these other invasive species in the state.

“Our concern in Michigan is someone violating the quarantine could cause devastating damage to Michigan’s forests,” Bedford said.

If you find one

Anyone who finds an Asian longhorned beetle, or a tree that appears to have been damaged by one, is asked to report it at www.asianlonghornedbeetle.com or mich.gov/ALB. You can also call (800) 292-3939 or email MDA-info@michigan.gov. If possible, capture the beetle in a jar, take photos, record the location, and report it as soon as possible, according to the Michigan Department of Natural Resources.