Reading lists a window into universities

Reading lists a window into universities 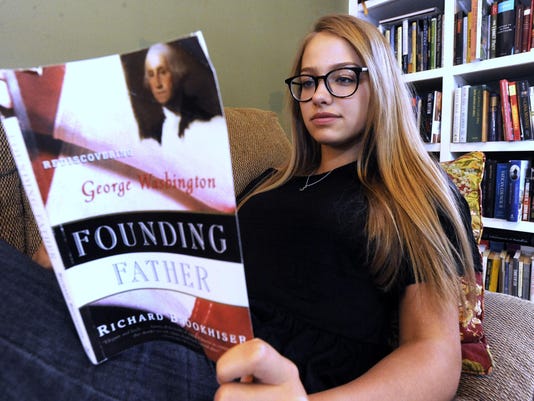 Correction: This story has been updated to correct the spelling of Peter W. Wood.

Jessie Collins recently got a letter from Hillsdale College President Larry Arnn welcoming her to campus this fall and suggesting she could prepare by reading two books over the summer.

Collins, who will be a freshman, was a little surprised by the books he suggested: Aristotle’s “Nicomachean Ethics” and Richard Brookhiser’s “Founding Father: Rediscovering George Washington.” But she was excited to begin her college studies, so she read them.

Though the books were supposed to prepare her for college life, Collins thought they went far beyond that.

“These books are not preparing us for a class,” said Collins, 18. “They are more preparing us how to be human, as individuals who are rooted in goodness and virtue.”

From small private colleges to large public universities, hundreds of higher education institutions ask incoming freshmen to read specific books before arriving on campus. Known as “common reads,” these titles can be nonfiction books or novels, often carrying a broader theme that may suggest the institution’s values.

Western Michigan University students are asked to read “Lit Up,” a book about 10th-grade English classes at a New York school, by David Denby. University of Detroit Mercy asks incoming freshmen to read “Callings: The Purpose and Passion of Work,” a book about people who found a path they love, authored by StoryCorps founder David Isay.

At Hillsdale, Provost David Whalen said the college has been asking students to read Aristotle and Brookhiser for more than a decade because their books contemplate the matter of human excellence.

“The first does so in principle, the second in the concrete example of George Washington,” Whalen said. “Not everyone is called to the greatness of Washington, but certainly every educated person is called both to understand and to be a virtuous citizen.”

But some say common reading programs — with the exception of Hillsdale’s — miss the mark because of the titles schools selected.

The National Association of Scholars, which has studied common reading programs extensively, said most of the common reading book titles — such as the ones chosen by many Michigan colleges — are written for low reading levels.

Additionally, the books cover contemporary, ideological and politicized issues such as race and criminal justice.

Popular readings, according to a study by the National Association of Scholars, include “Just Mercy,” Bryan Stevenson’s memoir of his life as an activist attorney; “Between the World and Me,” Ta-Nehisi Coates’ letter to his teenage son about the challenge of being black in America; and “I am Malala” a memoir by Nobel Peace Prize winner Malala Yousafzai, who was shot in the head by the Taliban after standing up for women’s education in Pakistan.

Most titles selected by common reading programs have been published within the last 10 years.

“That is not what colleges should be doing,” said Peter W. Wood, president of the National Association of Scholars. “When they choose one book, it should be a book that has passed the test of time because colleges and universities have the responsibility to distinguish what’s important and what’s trivial. To choose something that is trendy, fashionable, passable nonsense is a real disgrace.”

As a result, the National Association of Scholars has created its own list of recommendations that includes titles such as “Persuasion,” by Jane Austen; “The Plague” by Albert Camus; “The Last of the Mohicans” by James Fenimore Cooper, and “The Death and Life of Great American Cities” by Jane Jacobs.

But the National Resource Center for the First-Year Experience and Students in Transition views common reads more favorably, suggesting that the practice allows colleges and universities to signal academic expectations from the beginning of a student’s college career.

“The books communicate that the institutions are an engaged and intellectual enterprise, and this is an opportunity to come together and talk about books,” said Dallin Young, assistant director for research, grants and assessments at the National Resource Center, based at the University of South Carolina in Columbia. “It also signals academic rigor in college.”

Even more important, Young added, is that asking students to read a common book and then come together to talk about it creates a sense of belonging — a critical component for colleges to create for students, particularly in an era when retention and graduation remain challenges for most colleges and universities.

“There’s a lot of work in research that students’ sense of belonging leads to a number of success outcomes, including staying on campus,” Young said.

Precisely how many colleges and universities have common reading programs depends on who is asked.

The National Resource Center for the First-Year Experience and Students in Transition reports about 40 percent of colleges nationwide ask incoming freshmen to finish a common read for orientation or a first-year seminar, a course aimed at helping students with academic and social integration into college.

But the National Association of Scholars said there are 348 programs across the country, meaning about 10 percent of the nation’s 3,000 colleges and universities use common reads.

Prospective Kalamazoo College student Sophia Goebel agreed they are important, too. She spent a day in a hammock while camping this summer and read “On Immunity: An Inoculation,” a book about vaccines by Eula Biss that Kalamazoo College asked its incoming students to read.

After finishing the book, Goebel discussed it with her mother, with whom she differed on the issue of vaccination. Goebel learned a vaccine had been recalled shortly after she received it, something that helped her better understand her mother’s point of view.

The book’s controversial subject is probably why Kalamazoo College selected it, Goebel said.

“So we are able to see other people’s perspective by having productive, honest and open conversations with them and not getting caught up in your open point of view and thinking it’s the only way,” Goebel said.

“It lets you create a better counter-argument. It helps you to challenge yourself to think outside the box and develop your ability to be versatile and willing to step outside your comfort zone.”

Those traits, Goebel said, will benefit students in the future.

“Later on in life,” she said, “those skills are going to help you be a better co-worker, be a better boss, be a better leader for what you are planning to do.”