A cross and headstone indicate a gravesite inside the Bay County Pet Cemetery. Some say the cemetery is cursed. Katy Kildee, Special to Detroit News
Fullscreen 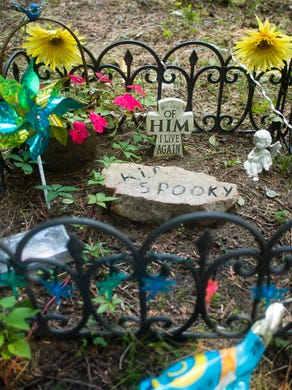 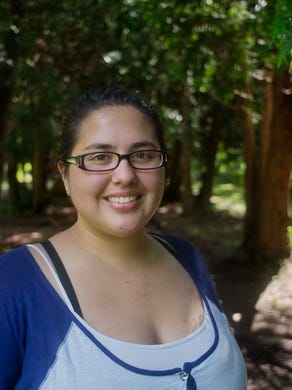 Sarita Bills of Bay City, is the leader of a group of volunteers that regularly maintains the Bay County Pet Cemetery. Katy Kildee, Special to Detroit News
Fullscreen 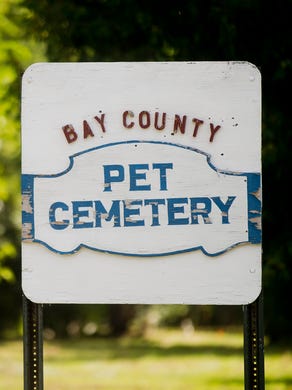 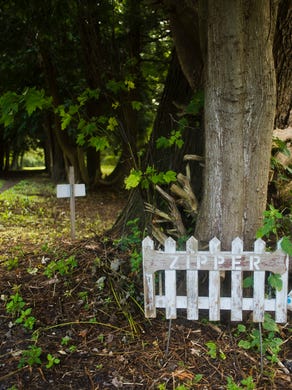 A sign and a cross mark a gravesite inside the Bay County Pet Cemetery. Katy Kildee, Special to Detroit News
Fullscreen Sarita Bills of Bay City, leader of a group of volunteers that maintains the Bay County Pet Cemetery, uses a push mower to cut the grass. Katy Kildee, Special to Detroit News
Fullscreen 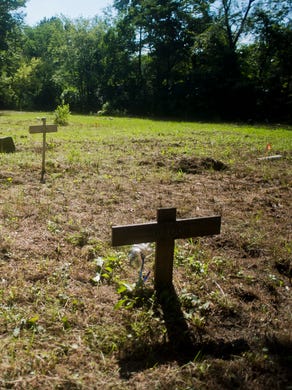 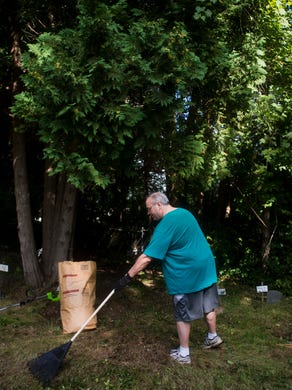 Josh White of Bay City works to raise a headstone inside the Bay County Pet Cemetery in August. White is one of a group of volunteers who regularly maintain the cemetery, which neighbors say has been neglected over the years.(Photo: Katy Kildee / Special to The Detroit News)Buy Photo

Bay City — Michigan may have its own Pet Sematary.

A Bay City resident blamed the nearby cemetery for the burglary of her home. Another said an elderly couple appears in the middle of the night. Gravestones disappear and buried pets reappear.

But the strongest proof the Bay County Pet Cemetery may be cursed — like the misspelled cemetery in Stephen King’s horror novel — is when someone tries to take care of it.

One group after another has tried to quell the unruly beast: churches, girl scouts, jail inmates, even a sexton named Sexton. But the graveyard has defeated them all, their efforts withering like one of the dead trees in the spooky-looking lot.

Lawn-care equipment breaks down. Volunteers stop coming. And nature quickly reclaims the field with grass shooting to the sky and vines entangling the fences.

“I don’t think too much of it. It’s never taken care of,” said Garnet Hemenway, 84, who has lived next to the cemetery for 60 years.

The burial grounds have so unnerved would-be caretakers they’re now turning against each other.

When a young entrepreneur hoping to open a pet funeral business damaged headstones while cutting the grass in August, he was skewered by critics who took 120 photos of the damage and posted them on Facebook.

Among the critics were past caretakers who felt slighted that Bangor Township had given its blessing to the entrepreneur’s efforts.

The graveyard has been the bane of many a township supervisor. The township doesn’t own it but frequently receives complaints about it.

In fact, no one owns it, which is part of the difficulty in trying to maintain it, officials said. A former township supervisor called it no man’s land.

“It’s something I don’t own, but I have to field the complaints,” current Supervisor Glenn Rowley said.

Many residents don’t know about the cemetery, which is easy to miss as it sits along a residential street. A small sign well off the road announces its presence.

The graves are located willy-nilly along a long, narrow 3-acre lot. The grass was recently cut by a volunteer but Stephen King would feel at home here.

Paint is chipping from the wooden sign. Dead branches hang from trees like vines. Gravestones are tilted and wooden crosses cock-eyed. Flat tablets are shattered or covered with weeds.

The monuments range from a simple rock to marble headstones that would be the envy of a regular cemetery.

Among the 175 animals are a goldfish, pony and monkey. They include Choo Choo, Pinney’s Poodles and even someone named Useless.

“It could be such a nice little place,” said Kathy Hacker, co-founder of Shelter Angels, which helps people adopt animals from county Animal Control.

The property was originally owned by Mendel Fair, who owned a Bay City foundry. In 1947, he sold it for $1 to the Bay County Humane Society, according to county Register of Deeds records.

Fair’s wife, Irma, was a member of the humane society who would bury several of her pets there.

The earliest grave found during a visit by The Detroit News was from 1949.

Back then the cemetery was immaculate and some pet owners held elaborate funerals, said resident Elenora Verellen. A white-paneled truck carrying flowers, small coffin and the wailing bereaved would lead a procession of cars into the lot.

“Years ago people cared more about everything,” said Verellen, who, at age 90, still works in her yard. “Now today I don’t know. It’s just gone to the wind.”

The News’ visit this month found few gravestones erected after the 1980s. People stopped maintaining the cemetery and it eventually was reclaimed by nature, residents said.

On spring evenings an elderly couple is sometimes spotted camping out among the gravestones, residents said.

In a separate incident, a nearby house was broken into in 2006 and the homeowner named the cemetery as an accomplice. Bev Schwebach told the township the brush had grown so thick it helped hide the burglars. She surmised they had parked their car in the cemetery.

But time and distance has tempered her views. Schwebach, who later moved to Wisconsin, told The News it was never proven the crooks had used the cemetery. They were never caught.

“I thought it was a very special place,” she says today about the cemetery.

The cemetery has long depended on the kindness of strangers.

Every few years a new group, bright-eyed and eager, came along and adopted the cemetery, said township officials. They usually began with grandiose plans but were soon overwhelmed by all the work.

The more they raked, the more leaves they created, volunteers said. It was almost supernatural. The raking had uncovered layers of leaves buried by years of neglect.

The do-gooders all sang the same chorus: It was hard to get anyone to join them.

When Bill Sexton began voluntarily caring for the cemetery in 2015, he received 100 phone calls from people offering to help. But only four showed up, and they quickly stopped coming.

Typical was the experience of Trisha and Nick Sexton (no relation to Bill) and their brood: Max, Makaylla and MacKenzie.

“When we arrived, we realized we were in for a doozy,” said MacKenzie, now 17. “We knew it was a lot of work, and it was going to be hot.”

The Sextons worked every day for a month, before and after work, sometimes from 2 p.m. until sunset. They cut grass, pulled weeds, marked graves, mended the fence and picked up trash, including an old microwave.

MacKenzie begged to leave. It’s hot, she told her mom. There’s no bathroom. “I want to go home,” she said.

But mother and daughter and the others returned every day, chipping away little by little. After a month they were finally finished.

When a young resident approached the township board in July with an offer to maintain the cemetery, Rowley was delighted. He had received complaints about the grass being 3 feet high. But the township didn’t have enough money to take care of its properties, let alone a no man’s land.

Cody LeTourneau, 20, who works for a local funeral home, told the township he planned to start a pet funeral business.

In August, one of LeTourneau’s relatives used a rotary mower to cut the grass, damaging a dozen headstones and toppling wooden crosses used to mark the graves’ locations, former caretakers said. LeTourneau said the damage was limited to several headstones.

Rita Bills, a volunteer, posted photos of the damage on Facebook and compared them to pictures she had sought from past volunteers showing what the gravestones had looked like.

She said if LeTourneau had checked Facebook first, he would have learned she was already taking care of the cemetery.

“He never looked at social media,” she said. “He’s a millennial. We live off of that.”

The photos sparked an outpouring of vitriol against LeTourneau, who promptly dropped his budding business. He said getting involved with the cemetery may have been a mistake, and didn’t realize he was “up against a team.”

“If I could go back and do it a different way I would,” he told the News. “I wish we could have gotten together instead of just pointing a finger.”

With LeTourneau out of the picture, volunteers are scrambling to take more control over the cemetery.

A Brighton man wants to donate $35,000 for its maintenance, they said. The man, who wants to remain anonymous, tried to help pet cemeteries in his hometown but was brushed aside by officials.

Before giving the money, the donor wants to straighten out the ownership issue.

The volunteers called a title company, which contacted a real estate attorney, but received several conflicting answers about whether the property could be purchased.

Bill Sexton looked into buying the property several years ago. He called the township, which told him the land wasn’t owned by anyone. But Rowley, the township supervisor, told The News the land reverted to Michigan and could be bought from the state.