Judge Gregory Ross in Sanilac County overturns his ruling that gave partial child custody to a rapist. The judge explained that he was not informed of the victim’s pregnancy or the rapist's conviction.

Sandusky — A Sanilac County judge and prosecutor vowed Tuesday to take action to avoid a repeat of a controversial ruling that granted a twice-convicted rapist partial custody of a child conceived during his sexual assault of a 12-year-old girl in 2008.

During a brief hearing, Judge Gregory Ross rescinded his Sept. 22 decision that granted parental rights to sex offender Christopher Mirasolo, while county Prosecutor James Young apologized “for the manner in which this case was handled.”

Both officials said they would review office procedures to prevent a similar situation.

Young also acknowledged mistakes in how the case was handled.

“The ball was dropped at several stages, and the result was a week of confusion, misinformation and publicity that cast a shadow over the many good people who work in the social service and legal agencies of our county,” he said.

At a rally of more than 100 supporters outside the courthouse before Tuesday’s hearing, the child’s mother, now 21, who has identified herself by her first name, Tiffany, criticized prosecutors for their handling of the custody case and a plea deal that resulted in Mirasolo serving less than seven months in jail in 2009 for assaulting her.

“I’ve been raped three times,” she said. “Once by the rapist and twice by the Sanilac County Prosecutor’s Office.”

Young singled out the state Department of Health and Human Services for not passing along information about Tiffany’s pregnancy or Mirasolo’s conviction. Ross said he relies on the prosecutor’s office for such information before ruling on custody matters.

A DHHS spokesman said last week that matters involving parental rights are made by local officials, not the state.

Mirasolo could have been sentenced to 25 years to life for the sexual assault of Tiffany, but was allowed to plead guilty to a lesser charge of attempted third-degree criminal sexual conduct.

He was released from jail in July 2009. In March 2010, he sexually assaulted a 14-year-old Deckerville girl and later pleaded guilty to fourth-degree criminal sexual conduct. Mirasolo was paroled in July 2016, according to a state corrections database.

The judge pushed back against claims on Tuesday that he didn’t pay enough attention to the case.

“It has been suggested that I ‘rubber stamped’ this order,” Ross said. “I do not rubber stamp orders. I felt it was routine. I did not ‘rubber stamp’ it.

“I do believe given the way this consent order was presented, I should have been advised the defendant raped the plaintiff. Mr. Young advised he is reviewing his procedures. He is doing what he can to correct the mistake and see that it doesn’t happen again.”

When asked if anyone in the prosecutor’s office had been disciplined or reprimanded for not passing on information to Ross, Young said “no,” but added the investigation was continuing.

“Procedures need to be reviewed,” Ross said. “The Family Division of the Circuit Court will be reviewing its procedures also. This should not happen to anyone.”

Mirasolo was given custody after paternity tests proved he was the biological father of the child, an 8-year-old boy.

The judge insisted Tuesday “there was nothing unusual in the consent judgment that caused me to investigate further,” and said he didn’t need to hear any additional arguments before canceling his earlier ruling.

Kiessling, while pleased with Ross’ action Tuesday, said the case is not over.

“My client deserves child support from (Mirasolo), and the judge did not address that or other matters,” Kiessling said. “I’m afraid we might have to be back here to get her the child support she is entitled to.” 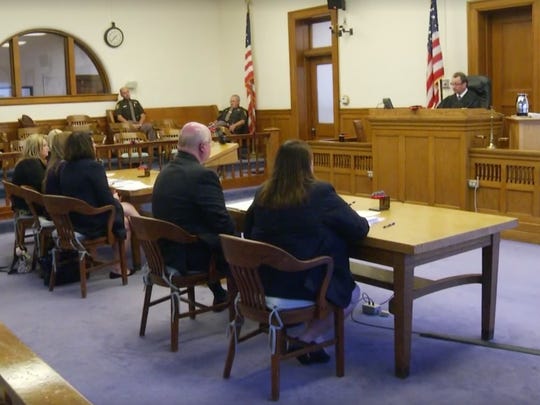 During a rally on the courthouse lawn Tuesday, the victim and her mother read letters they sent to another Sanilac County judge before Mirasolo was sentenced almost nine years ago.

Portions of the letters indicate court officials were advised in late December 2008 of the 12-year-old’s pregnancy and her wish that Mirasolo’s parental rights be terminated.

Speakers at the rally, including Kiessling, called for removal of some of the officials involved, including Ross and Young.

Ross said that “the first business day following the filing of plaintiff’s objections and motion being advised of the rape, I stayed the consent judgment and scheduled this hearing.”

“I will admit there are judges smarter than me, but I do have a reputation for being knowledgeable in the law, thorough, prepared and honest,” Ross said. “… And when a mistake is made, I am quick to correct it.”

Young said he had no intention of stepping down and that “others are entitled to their opinions.” He declined to discuss whether it was appropriate for his office to negotiate plea agreements with Mirasolo in the two sex assault cases.

“That’s a discussion for another day,” he said.