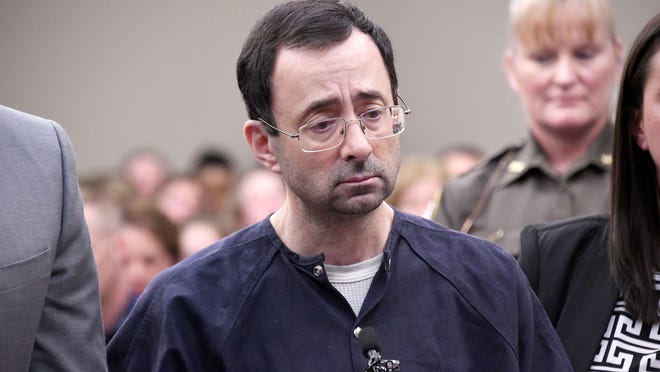 A Michigan State University Title IX investigator withheld key findings of a report on a 2014 sexual harassment complaint against Larry Nassar, providing less information to the victim in the case.

Kristine M. Moore, now MSU’s assistant general counsel, authored the dual reports, obtained by The Detroit News on Friday. In the one given to the victim, Moore cleared Nassar of sexual harassment. In the other report, which was sent to MSU and marked confidential, Moore also cleared Nassar but warned of his liability to the university.

Moore was asked to examine a complaint filed by Amanda Thomashow, who saw Nassar as a patient at the age of 24 for medical treatment for her hip pain on March 24, 2014. Thomashow alleged Nassar touched her breasts and vaginal area for several minutes. Nassar said it was for treatment for her shoulder and to adjust her pelvic bone.

“We find that whether medically sound or not, the failure to adequately explain procedures such as these invasive, sensitive procedures, is opening the practice up to liability and is exposing patients to unnecessary trauma based on the possibility of perceived inappropriate sexual misconduct,” Moore wrote in the report to MSU.

“In addition, we find that the failure to obtain consent from patients prior to the procedure is likewise exposing the practice to liability. If procedures can be performed skin-on-skin or over clothes in the breast or pelvic floor area, it would seem patients should have the choice between the two.”

In the report to Thomashow, which was only 22 pages, Moore did not include her statement about Nassar’s potential liability and trauma to patients. Instead, it ended with: “We find the claim helpful in that it allows us to examine certain practices at the MSU Sports Medicine Clinic.”

MSU spokesman Jason Cody said it was standard practice for the Title IX investigator to convey recommendations to the appropriate MSU personnel in an internal version of the report.

“The investigator followed that standard practice in this case. The final results of the sexual harassment investigation itself were included in the version delivered to the claimant,” Cody said. “Although the claimant did not receive the internal recommendations, she was advised that the investigation had resulted in recommended changes to policy at the SportsMEDICINE clinic.”

Jim Graves, Thomashow’s attorney, said on Friday he could not disclose how he learned of the second report, which he obtained in October. Thomashow got her version in July 2014.

“The second report reveals that MSU recognized this could result in a liability for the MSU SportsMEDICINE Clinic. They deprived Amanda and all of the survivors from that knowledge they held at the time. Had they disclosed that information, it would have been disseminated so people would know that Nassar was preying on girls,” Graves said.

He added: “Amanda felt anger and betrayed that her university concealed critically important information from her.”

‘Made me feel worthless’

MSU President Lou Anna Simon resigned from the university on Wednesday after more than 150 young women testified in Ingham County Court for seven days about how their lives were profoundly altered by Nassar’s sexual abuse. A judge sentenced Nassar to 40-175 years in prison.

According to Moore’s report, Thomashow, who was one of more than 150 victims who testified at Nassar’s sentencing this month, said Nassar began to massage her with three fingers in a circular motion in her vaginal area.

“She states she was shocked. She states he was extremely close to inserting a finger into her vaginal opening. She states she could not process in her mind what was happening,” the report says.

The conduct went on for a minute and a half or so before Thomashow says “she got the courage to say ‘stop, you’re hurting me.’ She states he did not stop in response, but instead said ‘I’m almost done,’ ” the report by Moore says. The entire appointment lasted 90 minutes.

Thomashow, who could not be reached through her lawyer, stood with her father at Nassar’s sentencing last week.

“He was so smooth, so calculated at that appointment. Then he sexually assaulted me. I could not let that happen to anyone else,” she said.

Thomashow said after the Title IX report cleared Nassar, he returned to work a few months later while the MSU Police investigation continued for more than a year. He was able to abuse at least a dozen others during that time, she said.

Thomashow said in court that at first, she was hopeful about the Title IX investigation done by MSU’s Moore.

“The investigation done by MSU was brief and sloppy and made me feel worthless,” she said. “Michigan State University had the audacity to tell me I did not understand the difference between sexual assault and a medical procedure.”

On Jan. 19, the MSU Board of Trustees met with Simon and spent more than three hours talking behind closed doors. The board released a statement that denied any “cover-up” by the university over its handling of Nassar.

In Moore’s report, Nassar was interviewed as part of the investigation and told Moore he touched Thomashow’s breasts in his examination of her shoulder, “but that it was medically necessary.”

After Nassar was informed of the allegations related to touching Thomashow’s vaginal area, he responded that everything described “in terms of Ms. Thomashow’s description sounds like standard operating procedure.”

Nassar told the investigator that he is known for this type of pelvic floor work, but that he knows it is not widely performed and, in fact, he has included in his presentations that the pelvic floor area is ignored by too many physicians.

“He indicated that he has a slide in a frequently used power point that contains Star Trek images and is entitled ‘Pelvic floor: Where no man has gone before,’ ” the report says.

‘Cannot find it was sexual’

Moore included interviews with other physicians and treating professionals practicing in this area in her report. All three of the physicians, as well as a certified athletic trainer, concurred that the conduct alleged was medically appropriate. All knew Nassar. Two had worked with him before.

“Finally, Dr. Nassar has presented on this nationally and internationally, has videos posted to the web that explain the procedure and is widely known for this work. We also considered that the other three physicians all performed the procedure over clothes- not one used skin-on-skin technique,” the report says.

“However, all three physicians opined that using a skin-on-skin method provided a medical benefit that was lost when performed over clothing — some clothing in particular.

“Based on this, we cannot find that the conduct was medically inappropriate and thus, cannot find it was sexual in nature.”

Attorney Mick Grewal, who represents 65 of Nassar’s victims but not Thomashow, said on Friday under Title IX, the complaining person has the right to the full report.

“There should not be two reports. I’ve never heard of two reports,” Grewal said. “If there were two, they should have been released at the same time. Not years later.”

Reports of sexual misconduct by Nassar reached at least 14 Michigan State University representatives in the two decades before his arrest, with no fewer than eight women reporting his actions, The Detroit News reported earlier this month.

Among those notified was Simon, who was informed in 2014 that a Title IX complaint and a police report had been filed against an unnamed physician.

Among the others who were aware of alleged abuse were athletic trainers, assistant coaches, a university police detective and an official who is now MSU’s assistant general counsel, according to university records and accounts of victims who spoke to The News.

Collectively, the accounts show MSU missed multiple opportunities over two decades to stop Nassar, a graduate of its osteopathic medical school who became a renowned doctor but went on to molest scores of girls and women under the guise of treating them for pain.

The university defended itself over its handling of Nassar to nearly to the bitter end, and even asked to be released from federal monitoring by the U.S. Department of Education’s Office of Civil Rights, just days before Nassar’s criminal case was set for trial in Ingham County in October.

MSU has been under federal monitoring for violating Title IX in the handling of sexual assault cases on campus. Title IX is a federal law that prohibits educational programs or activities from discriminating against someone on the basis of their sex.

The university’s request was firmly rejected on Dec. 21 by federal officials who said MSU failed to provide respond appropriate to two complaints filed by female students who alleged they had been sexually assaulted.

’Everything ... has been provided’

In response to a FOIA request from The News asking for records related to Nassar, the civil rights office released documents showing MSU admitted it has failed to provide files to the office for a 2014 investigation. It’s unclear for which investigation the files pertained to based on redacted parts of the documents.

Harrison Blythe, with the Office of Civil Rights, sent an email dated Jan. 17 and titled “MSU Update,” saying he had yet to receive additional information from MSU related to the files that were excluded from a review.

An email to Blythe, where the name was redacted, said an update was coming along with another update due Jan. 31.

Cody told The News this week that “everything that OCR has asked MSU for has been provided.”

“I can confirm several case files were misplaced during the transition of our Title IX function to a new office. As soon as we discovered that, we immediately notified OCR and later provided them,” Cody said in an email.

In the Oct. 10 letter to federal officials, MSU deputy General Counsel Kristine M. Zayko said the university had followed its 2015 agreement with the federal office “in good faith” and in most respects, has “gone above and beyond its requirements.”

In September 2015, the Office of Civil Rights determined the university had violated Title IX in the handling of sexual assault cases on campus and had failed to comply with MSU’s official policies and measures. Because of the violations, MSU signed a “Resolution Agreement” to address the compliance issues identified by the civil rights office.

Under the resolution, MSU was required to examine past grievance filed and evaluate them to determine whether they were handled properly and if additional actions or investigations were warranted.

Nassar is never mentioned by name in the Oct. 10 letter, which was also sent to U.S. Department of Education Secretary Betsy DeVos, who announced on Friday Education that her department is investigating MSU, vowing to hold the public university in her home state accountable for any violations of federal law.

In the letter, Zayko complained that MSU had to wait years for input from the federal office.

“The university has worked tirelessly to assess and revise its policies and procedures to respond to OCR guidance and meet its obligations under Title IX, often with little or no input from OCR until years later,” Zayko wrote.