The vote has no legal weight but it’s aimed at taking a stand in the wake of Nassar scandal, professor says

East Lansing — The Michigan State University faculty senate erupted in applause after nearly all of its voting members on Tuesday cast a vote of no-confidence in the Board of Trustees in the wake of the Larry Nassar scandal.

The vote was a rare move in academia and another sign of the anguish and frustration among the MSU community as it works to move past the sexual abuse scandal that has shaken the university.

MSU Provost June Youatt said afterward she was not surprised by the outcome of the vote, approved by 61 of the 65 voting members, or 94 percent.

“I hope (board members) will reflect on what got them to this point,” said Youatt. “This vote today is not so much an outcome as it is a window into how the faculty and students of this campus have experienced this for the past few weeks. I hope that’s what they hear, that this discussion that went on today about the hurt and pain and the culture and our collective responsibility. I hope they hear that.”

The vote came on the same day a U.S. Senate committee released a letter from MSU in which lawyers for the school said current and previous employees “do not remember the alleged reports to them” over the two decades that Nassar sexually abused girls under the guise of a medical treatment. 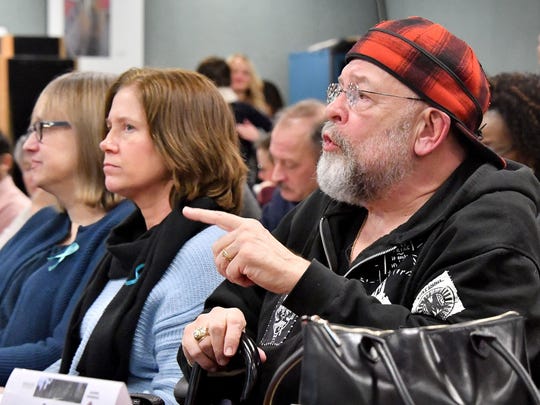 Faculty member Ron Cichy asks the chairperson a question as MSU faculty members meet to vote on a "vote of no confidence" over the university's leadership. (Photo: Dale G Young, Detroit News)

MSU Interim President John Engler also wrote to the MSU community, outlining the numerous demands on the university as a result of Nassar’s sexual abuse of at least 265 women while a university and USA Gymnastics physician.

“We can do better with our campus relationship climate, and I’ll continue reaching out to people and groups in the days ahead for advice and suggestions that can move us toward the kind of campus we all want to be associated with,” Engler wrote.

The kind of no-confidence vote taken Tuesday in East Lansing is seldom seen at universities but it is not unheard of, said Daniel Hurley, the Michigan Association of State Universities president, who previously worked in higher education on the national level.

It came after weeks of discussion among faculty members about the failure of MSU’s response to Nassar — who has been convicted and essentially sentenced to a lifetime in prison. He began serving his time last weekend at the United States Penitentiary in Tucson, a high-security prison where upward of 70 percent of inmates are sex offenders.

In mid-January, faculty members discussed casting a vote of no confidence in former President Lou Anna Simon before Nassar was sentenced and dozens of young women testified in Ingham County Circuit Court about the impact his abuse had on their lives. But at the end of the seven-day hearing, after more than 150 women and girls spoke, Simon resigned before a vote could take place.

Some faculty and students who spoke at Tuesday’s meeting expressed concern over the trustees’ actions prior to Simon’s departure.

“Our MSU board stood by Simon, gave her a raise. The board positioned themselves on the wrong side of history ... this board has failed us,” MSU associate professor Andaluna Borcila said before the vote. “We need to take a stand ... We have a responsibility to use our voice.”

Rachel Alexander, an MSU junior, added that students care deeply about the issue, and she encouraged the faculty senate to take action as a necessary step to heal, move forward and recover.

“To those who say this is pointless and this vote is purely symbolic and that it is nothing or unproductive, I leave you with a quote ... that I believe is extremely important to our current predicament: ‘Our lives begin to end the day we become silent about the things that matter.’ Martin Luther King Jr.,” Alexander said.

The vote of no confidence has no legal weight but is aimed at taking a stance on the issues facing MSU, said Robert LaDuca, an associate dean for administration and academic governance and professor.

“We hope by taking a formal moral stand we show that we are on the side of the students and the survivors,” said LaDuca, an at-large member of the faculty Steering Committee in MSU’s academic governance structure. “Not just the survivors of Larry Nassar, but anyone who has been abused or harassed or assaulted.”

MSU trustees chairman Brian Breslin could not be reached and vice chairman Joel Ferguson declined comment. John Truscott, Engler’s spokesman, said the trustees “are constitutionally elected officials — only the voters of Michigan can change the constitution.”

The faculty senate will send a letter to the trustees, informing them of the vote, said Laura McCabe, president of the Steering Committee and physiology professor.

She added that she expected that the vote will be discussed Friday at the Board of Trustees’ regular meeting, the first since Engler was appointed. Faculty members will have to discuss where to go from here, whether they want resignations from board members, more faculty input or other demands.

“Everybody wants different things: Some people want resignations, others don’t,” McCabe said, adding that she is not sure if trustees need to resign.

Asked what is the bare minimum that needs to happen, McCabe said faculty involvement is critical.

“We need to be at the table for decision-making and need to be taken seriously,” McCabe said.

On Jan. 29, the faculty Steering Committee met privately with the Board of Trustees to give input on selection of the interim president. They made many suggestions, including waiting a month to appoint an interim president, and considering a woman to lead the university during the tumultuous period.

But the board did not listen to the suggestion of faculty members, some believed, since the next day the board appointed Engler as MSU interim president.

“At this meeting we expressed in no uncertain terms that appointing a former Governor with no academic leadership experience as Interim President would not be the best way to heal the wounds of our community in this politically polarized climate,” said the memo, written by five faculty members.

The faculty’s effort to cast a vote of no confidence in the board began soon after.

The impetus behind it is why Shawnee Vickery, faculty director of the Demmer Center for Business Transformation, cast one of the four votes against the vote of no confidence in the MSU board.

Vickery said that focusing on the appointment of Engler without faculty input as the reason for a no-confidence vote seemed “tone deaf.” She lobbied the faculty senate to amend its motion to focus more on failure of the board’s response to the young women abused by Nassar.

“For months, the Steering Committee and the faculty have been aware of the failure of MSU administrators over the years to stop and prevent the rape and sexual molestation of young women and little girls at the hands of Larry Nassar,” Vickery said. “During this time, both before and after the resignation of President Lou Anna Simon, there was no call for a vote of no confidence in the board due to this egregious lapse in leadership and accountability.