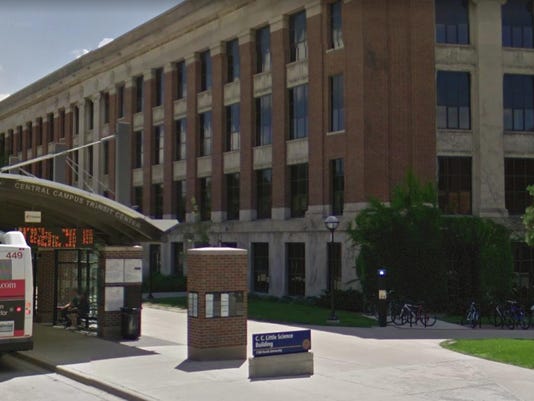 The University of Michigan is taking steps to strip the name of a former president, Clarence Cook Little, from a campus science building.(Photo: Google)

The name of a former president of the University of Michigan may be removed from a school building because of the leader’s controversial views.

The U-M Board of Regents will consider renaming the Clarence Cook Little Science Building during a meeting Thursday.

Little, who was president from 1925 to 1929, supported eugenics in the 1920s and, in the ’50s and ’60s, downplayed the connection between smoking and cancer, said supporters of a campaign to strip his name from the building.

Eugenics is the science of improving people by controlled breeding that increases the occurrence of desirable heritable characteristics.

“We find it inappropriate that his name is on a building, and particularly problematic that it is on a building dedicated to science,” said Terrence McDonald, a U-M history professor who is chairman of the school’s President’s Advisory Committee on University History.

The regents also will consider renaming the Alexander Winchell House, a residence hall, because of its namesake’s racist views.

With Little, the advisory committee recommended his name be removed from the building after reviewing a petition by faculty and students calling for the action. U-M President Mark Schlissel concurred and made the same recommendation to the regents.

The building’s name was the focus of two public forums last year where speakers called for Little’s name to be removed.

In making its recommendation, the committee said Little had lent his scientific, and university, prestige to public campaigns that supported eugenics and downplayed the link between smoking and cancer.

The campaigns were supposedly based on science but the scientific foundations were minimal or even contradicted by mainstream or contemporary scientific thought, said the committee.

Little, who was president of the American Eugenics Society, was active in campaigns that called for immigration restriction, anti-miscegenation laws and sterilization of the “unfit,” said the committee.

“(Also) the 1950s campaign sowing doubt about the links between smoking and cancer negatively affected the lives of millions,” the committee wrote in its recommendation.

If the name is dropped, the building will be known by its address or a functional designation until a new name is established, said Schlissel.

As for the Alexander Winchell House, Schlissel will recommend the former U-M professor’s name be removed from the residence hall.

Winchell, a professor of geology in the 1800s, published pamphlets that argued intelligence was related to race, and that whites were superior to other races.

In 1880, he published “Preadamites, or a Demonstration of the Existence of Men before Adam,” which, even by the standards of that time, were unambiguously racist, said the advisory committee.

Parts of the book continue to be used today to support the views of white supremacists, said Schlissel.