What she heard in that January 2017 phone call astonished her. Four months after MSU fired Nassar, Klages passionately defended the doctor, suggesting that he was performing a legitimate medical procedure and had been framed with the child pornography found on a hard drive placed at his curb, Lemke said.

Yet just three weeks later, MSU’s 27-year gymnastics coach broke from her decades of loyalty to Nassar and told police that the physician had deceived her, according to records obtained by The Detroit News.

Within two weeks of that interview, Klages was gone from MSU, taking with her one of the enduring mysteries of the Nassar scandal: What caused one of his most devoted supporters to suddenly change course?

Klages has not explained. With mediation resuming to settle the civil suits filed against MSU by Nassar’s victims and a special prosecutor this week announcing charges against Nassar’s medical school boss, the answer might never be known.

But there were fast-moving developments in the case during the time leading up to Klages’ retirement, including lawsuits filed against her and the university that may shed light on her about-face. 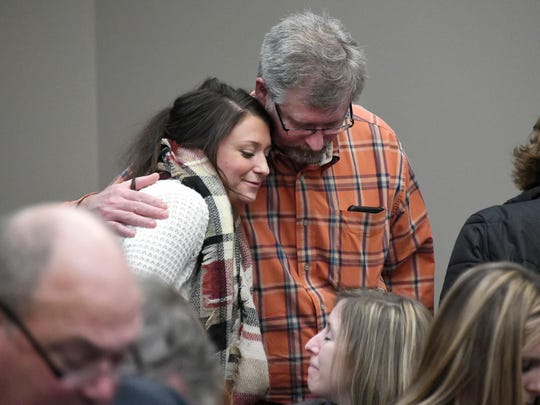 “She knows she did something wrong,” said Lindsey Lemke, who had seen Nassar for pain relief since seventh grade, about Klages. (Photo: Dale G Young / The Detroit News)

“I think she knew her time was up,” said Larissa Boyce, 37. Boyce filed her lawsuit on Jan. 31, 2017, the same day Klages told police she’d been deceived, and included an allegation that Klages did nothing after Boyce told the coach in 1997 that Nassar was molesting her.

Klages’ has not spoken publicly since her retirement 13 months ago. Her lawyer, Steven F. Stapleton of Grand Rapids, declined repeated requests to speak with her.

“I think she was just trying to cover her butt,” said Lemke, who gave Klages the courtesy call because her daughter, Lindsey, was still an MSU gymnast. “He had us fooled. He had everybody fooled. That’s fine, he had her fooled too, but she still should have reported him years ago ... I don’t care who he was.”

Nassar was a renowned osteopathic doctor who treated many athletes and was well-known for his work with Olympic athletes. He pleaded guilty to molesting nine girls in two counties, but is accused of more than 250 assaults that took place at MSU, the Karolyi Ranch USA gymnastics training center in Texas, the Olympics and in a small room at Gedderts’ Twistars USA in Eaton County.

This week, a special prosecutor appointed at the request of MSU trustees announced criminal charges against William Strampel, Nassar’s onetime boss and the former dean of the MSU College of Osteopathic Medicine, accusing Strampel of preying upon MSU students. The prosecutor, William Forsyth, also has sought every university record involving Klages related to Nassar.

Klages and Strampel were among 14 MSU representatives who received reports about Nassar abuse over the two decades before his arrest, according to a Detroit News investigation.

‘She did something wrong’

Many survivors, including Lindsey Lemke, say they might have been spared if Klages reported him years ago.

“She knows she did something wrong,” said Lemke, who had seen Nassar for pain relief since seventh grade.

According to a police report that recently emerged, when the first public allegations were made against Nassar in fall 2016, Klages made an emotional proclamation to the gymnastics team: She didn’t believe the claims of misconduct.

Klages held a team meeting and announced her support of Nassar on Sept. 12, 2016 — the same day the Indianapolis Star published a story in which Rachael Denhollander and another woman said the doctor had assaulted them years earlier.

MSU Police Lt. Christopher Rozman was investigating the meeting four months later, in January 2017, after allegations emerged of attempts to obstruct the Nassar investigation. After interviewing several people, Rozman concluded no one tried to deter anyone from cooperating with police.

Rosman’s report illuminated Klages’ mindset about Nassar as the allegations against her longtime colleague emerged and spread.

The backdrop of the police report was the Sept. 12 meeting, held in a classroom at Jenison Field House during a regular practice of the gymnasts.

The meeting was led by Jamie Baldwin, a director of MSU Athletic Communications. She spoke to the gymnasts about the newspaper report, sharing the allegations against Nassar and telling them to refer all media inquiries to her so they could be passed on to the university’s Communications and Brand Strategy department, according to Rozman’s report. She also said they should avoid making social media comments.

Then Klages said things that caught many gymnasts by surprise.

“(Klages) stood on her soapbox and told the team that she has known Larry for many, many years and he is an absolutely phenomenal doctor and she did not believe that any of the allegations against him had any truth,” Rozman wrote in his report. “She told the team she would feel comfortable right then sending her own daughter or granddaughter to Dr. Nassar for treatment and had absolute confidence and trust in him.”

During the interview, Klages told Rozman that she absolutely meant those things at the time, but now felt “completely duped” by Nassar, according to the report.

Gymnasts — whose names were redacted from the report MSU released to The News — expressed a range of opinions about Klages’ comments supporting Nassar.

At least one told Rozman she did not think Klages’ comments were inappropriate since it was a “heartbreaking and unbelievable” moment and because most of them knew and were loyal to Nassar.

Another said she remembers Klages “saying something like, ‘I can’t believe someone is trying to take Larry out like this.’ ”

One other gymnast feared Klages’ support of the doctor may have discouraged others from speaking up about his conduct.

“If there was an individual on the team that was a victim, I think it would be difficult for them to come forward after Kathie spoke,” that gymnast told Rozman, according to the police report.

Klages told Rozman that the day after the meeting, she sent the gymnasts a message with the phone number for the Office of Institutional Equity. She told police she did it to make sure they had a number to call to report abuse if they weren’t comfortable confiding in the coaching staff.

A few days later, Klages brought in a “thinking of you” card for gymnasts to sign for Nassar if they wanted, one gymnast told Rozman.

“Most of the teammates were happy to sign the card and didn’t think anything of it,” the report states. “But she thought it was odd that they were told not to communicate or talk about the case yet her coach was having them sign a card for (him).”

‘Who would plant’ evidence?

When Rozman interviewed Klages on Jan. 31, 2017, the scope of Nassar’s crimes wasn’t clear and he maintained his innocence.

When the first allegations emerged against Nassar in fall 2016, Christy Lemke asked Lindsey if Nassar had sexually assaulted her, too. She told her mother that he had not done anything inappropriate to her.

Lemke continued to ask her daughter if Nassar had victimized her as more complaints emerged and authorities arrested him in November 2016 on charges of first-degree criminal sexual conduct. Lindsey still denied any abuse.

Soon after police arrested Nassar in December on charges of possessing 37,000 images of child pornography, Lemke asked her daughter again. Lindsey, who said she had begun to realize that Nassar had sexually assaulted her for years, then told her mother he had.

In mid-January, Christy Lemke called Klages to say she was going to police. Klages told her that Nassar was performing a legal medical procedure, Lemke recalled of the conversation.

“So you knew he was doing this to the girls?” Lemke replied, according to her memory of the call. “She said, ‘It’s legal.’ I said, ‘Kathie, it is not legal. He wasn’t wearing gloves. He didn’t ask us. No one was in the room. We knew nothing about this, Kathie.’ ”

Then Lemke questioned Klages about the child pornography found on the external hard drives in Nassar’s garbage. Klages suggested someone planted it, Lemke said.

“I asked her, ‘Kathie — who would plant something like that?’ She said, ‘Someone who is suing him,’ ” Lemke recalled.

On Jan. 10, a few days before Lemke called Klages and reported Nassar to police, 18 women filed a federal lawsuit against him, a development widely reported by national news outlets.

During the next several days, the Nassar criminal investigation expanded quickly.

Prosecutors and attorneys for the former MSU doctor appeared before a Lansing-area judge, arguing whether a courtroom should be closed during a hearing to determine if Nassar would be tried for sex crimes.

Michigan’s Department of Licensing and Regulatory Affairs suspended Nassar’s doctor’s license. And in Texas, authorities began investigating the Karolyi Ranch, where some of the alleged abuse took place. Boyce’s lawsuit, filed at the end of January, was followed on Feb. 14 by a second gymnast’s suit against Nassar that allegedly corroborated Boyce’s story. That same day, Klages stepped down.

She had earned $75,768 annually. She left with her defined contribution plan, a 403(b), in which she was vested, and health and dental coverage. She also left with $1,598 worth of sports tickets, which she paid taxes on, a benefit for which all athletic department staff is eligible.

In a letter to Klages that day, then-MSU Athletic Director Mark Hollis pointed to her behavior during the Sept. 12 meeting.

“While I acknowledge you provided student-athletes with information about reporting to the Office of Institutional Equity, your passionate defense of Dr. Nassar created an emotionally charged environment for the team,” Hollis wrote, which is part of Klages’ personnel file.

“This has not abated and my concerns lead me to suspend you with pay,” he wrote. “You have since notified me that after thoughtful consideration of all the circumstances, you intend to retire from your coaching position effective immediately.”

Klages has not spoken publicly since her sudden retirement. In the eight months after he first interviewed her, Rozman telephoned Klages in September 2017, and asked her a few more questions.

Among them: Did anyone disclose any abuse by Nassar to her?

Klages told Rozman she had recently seen an interview from a gymnast claiming she had told Klages about abuse by Nassar years earlier.

“I have beat myself myself up trying to remember but I have no idea,” Klages told Rozman.

Boyce alleges she told Klages two decades ago in her office at Jenison Field House how Nassar would “finger” her during medical treatments. But Klages allegedly said to Boyce that “she must be misunderstanding.”

Klages brought in several of Boyce’s fellow youth program gymnasts into her office and asked them if Nassar did the same to them. One of them, who was 14 at the time, said she told Klages that he had.

That victim, who has remained anonymous, filed a lawsuit the same day Klages stepped down.

“That was a very monumental moment in my life,” said Boyce. “I believe it was in hers, too. I don’t think she had ever heard that her friend was being inappropriate ... I don’t know how she could so conveniently forget that.”