As holy month begins Tuesday, locals are donating, volunteering and supporting efforts to help those in need 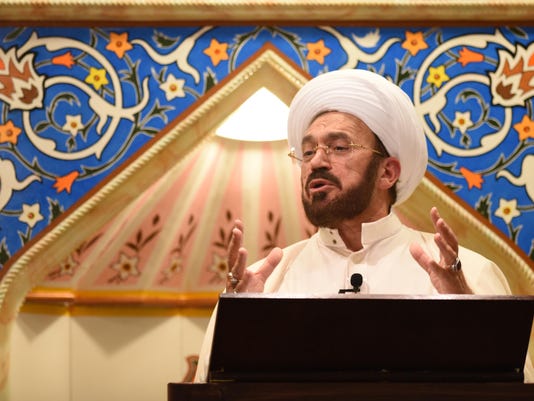 Just as the Quran, the holy text, describes prayer as repairing bonds with God, “charity is fixing our relationship with people,” said Imam Mohammad Ali Elahi at the Islamic House of Wisdom in Dearborn Heights. “During Ramadan, people feel they must be more giving and generous.”(Photo: Max Ortiz / The Detroit News)Buy Photo

When Muslims mark the holy month of Ramadan starting Tuesday, they’ll focus on shunning earthly cravings and donating to charity.

That’s why Rima Charara of Dearborn Heights plans to joins others in donating to a local humanitarian group’s food pantry. Others during the next 30 days will volunteer their time and support efforts to help those in need.

“It’s really the month of giving,” the business owner said while shopping for the holiday this week. “I cannot sit on my table and feed my family and get up feeling filled when somebody’s hungry out there.”

To mark Ramadan, which starts Tuesday and lasts through mid-June, regional Muslims are taking charity, one of Islam’s five pillars, to heart.

Just as the Quran, the holy text, describes prayer as repairing bonds with God, “charity is fixing our relationship with people,” said Imam Mohammad Ali Elahi at the Islamic House of Wisdom in Dearborn Heights. “During Ramadan, people feel they must be more giving and generous.”

One of the most visible undertakings during the holiday is the Ramadan Fight Against Hunger, a campaign the Michigan Muslim Community Council coordinates each year. Many community groups, mosques and volunteers collect as well as donate meals and food.

Last year, participants distributed more than 50 tons. In 2018, organizers aim for higher totals and turnout, said Muzammil Ahmed, a member of the council’s executive board.

“I think with the political climate, people realize they really need to take a stand, act out on their belief and show people what it means to be a practicing Muslim,” he said. “Ramadan is a time to renew our faith. That’s why people try to do more service this month than any other.”

Spending long hours sorting, packing and doling out the contributions with scores of volunteers can be spiritually rewarding, project coordinator Mariam Sharaf said. “Ramadan is more about sacrifice, so even if you’re tired or hungry, you have to go out and help other people.”

Zaman serves more than 180 families monthly, and most patrons live on less than $12,000 a year, founder/CEO Najah Bazzy said.

Tending to others’ needs anchors another Ramadan-related initiative led by the Michigan Muslim Community Council and the Muslim Foster Care Association. The groups are teaming up to organize gift packages for area Muslim foster and refugee children.

Coordinators connect with social workers and others to find the gift recipients, learn their “wish list,” then gather clothing, shoes, books and toys as well as other items, said Sumaiya Ahmed Sheikh, executive director at the Michigan Muslim Community Council. “This is an act of our faith: to make sure everyone has what they deserve. At the end of the day, you have to serve the less fortunate.”

The presents often are godsends to the youths — some new arrivals from African or Middle Eastern countries and “struggling with not feeling particularly welcomed in a culture that is not theirs,” said Michelle Haskell, an outreach team lead at Samaritas, the Detroit-based group involved in their placement. “This show of support — it’s just apparent how much this means to them.”

Through June 14, area Muslims will work to strengthen bonds with their neighbors while attaining spiritual heights through frequent prayer and reciting the Quran. Adherents also abstain from nourishment daily between dawn and dusk, a fast some 80 percent of American-Muslims observe, a 2017 Pew Research Center survey found.

The act enlightens, said Samar Baydoun Bazzi, a mother of three from Dearborn. “It brings out the sensitivity toward others and their struggles because we get to feel what a person without food will feel like,” she said. “I love Ramadan. It definitely makes me strive to be a better person.”