Michigan will set aside $50 million in state funding to help jump start what could be a $1 billion project in the Upper Peninsula. 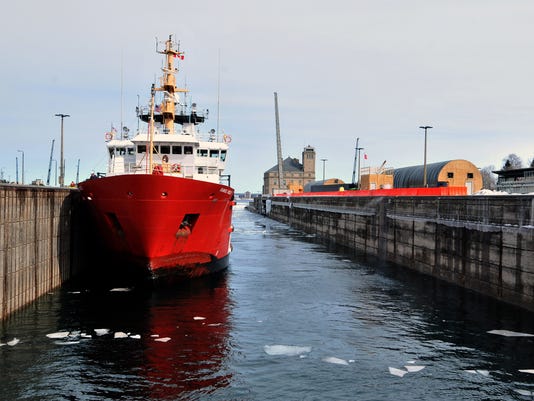 Mackinac Island — Michigan is setting aside $50 million in state funding to help jumpstart what could be a $1 billion project to upgrade and modernize the aging Soo Locks, Gov. Rick Snyder and legislative leaders announced Wednesday.

Snyder is urging the federal government to provide most of the money to upgrade the critical trade route in the Upper Peninsula, but the second-term Republican said the state funding could help meet any potential match requirement.

“We’re stepping up,” Snyder said on the porch of the Grand Hotel during the annual Mackinac Policy Conference. “We’re going to lead the charge to get this one, because it’s good for not just all of us, but for our country and North America and the world.”

Republican President Donald Trump appeared to give the project his blessing during an April rally in Macomb County, where he said the Soo Locks are “going to hell” and vowed to “get them fixed up.”

The White House has not confirmed whether Trump ended up calling the Army Corps of Engineers to speed up the process, as he promised, but Wednesday’s announcement reflects a new optimism about the potential project by Michigan leaders.

The $50 million state commitment will come out of a roughly $500 million budget surplus that Snyder and legislative leaders agreed to divvy up last week. The deal included $330 million in extra road funding, along with $82 million for other infrastructure projects, including the Soo investment.

“We have the ability to do things we weren’t able to do and invest so that our Michigan economy can move forward,” said Senate Majority Leader Arlan Meekhof, R-West Olive. He was joined at an afternoon press conference by House Speaker Tom Leonard, R-DeWitt.

The additional $32 million in unspecified state infrastructure funding could be used on potential projects to limit risks from the Enbridge Line 5 oil pipeline that runs beneath the Straits of Mackinac and ongoing efforts to combat Asian carp, Meekhof suggested.

Snyder said his administration is already calling other Great Lakes states in an attempt to secure another $150 million for the Soo Locks project. A broad Trump infrastructure proposal not yet taken up by Congress could require 20 percent of the funding come from non-federal sources, the governor told reporters.

“This is about economic security and national security,” Snyder said. “We’re talking about making a strong investment, partnering with the federal government and other states to do that.”

Michigan’s congressional delegation has long pushed for federal funding to build a new 1,200-foot-long lock to mirror the 49-year-old Poe Lock, which handles large freighters carrying iron ore. Congress authorized the project in 1986 but it has repeatedly stalled amid scrutiny by the Army Corps of Engineers.

Replacement advocates contend a Poe Lock failure could have catastrophic impacts on the economy in Michigan and other states rely on steel produced from iron ore that passes through the locks, which are located on the St. Mary’s River between Michigan’s Upper Peninsula and the Canadian province of Ontario.

A water infrastructure bill advanced last week by the Senate Environmental and Public Works Committee includes a placeholder that could be used to authorize the Soo Locks project once the Army Corp. completes an ongoing economic assessment, Sen. Debbie Stabenow said earlier Wednesday.

“I feel like we’ve been taking it step by step, but we’re now at a very significant point,” said Stabenow, D-East Lansing.

Trump has not called the Army Corps as he said he would after discussing the Soo Locks project with Republican congressional leaders in April, according to Stabenow, who said her office has repeatedly checked in on the promise.

“I am hopeful the fact the president said that, then that means they’ll be supportive of moving this along as much as we can,” Stabenow said. “If he weighed in, we certainly could move faster.”

Snyder did not name the other states he is asking to contribute to the project, but he noted that Michigan, Ohio, Wisconsin recently partnered on a plan to prevent an Asian carp invasion by upgrading the Brandon Road Lock and Dam in Illinois.

The three states, along with the Canadian province of Ontario, in January agreed to cover about $8 million in annual operation and maintenance costs for five years to facilitate the Brandon Road project.

“We have a model that’s worked well before, and we’re working on that again,” Snyder said.